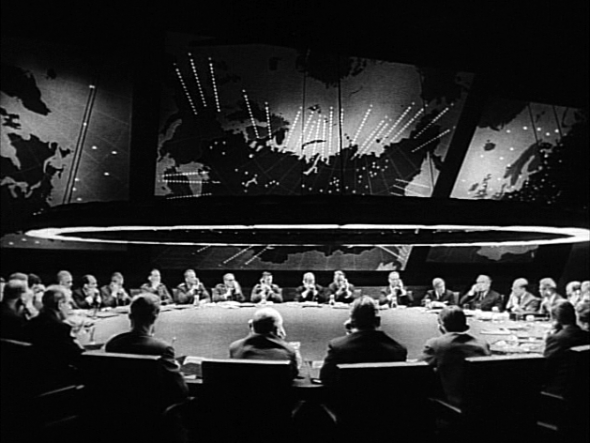 Still from Dr. Strangelove, "in the war room." (Photo courtesy of wikimedia commons)

An unhinged general with his finger on the button, ordering a nuclear strike on Eastern Europe? In 2019?

Wait a minute. Let’s go back to 1964, when “Dr. Strangelove or: How I Learned To Stop Worrying And Love The Bomb” premiered. The film, which will screen on Saturday, July 27, at the Little Art Theatre as part of its 90th anniversary celebration, is a classic. It’s listed as the #3 comedy in the American Film Institute’s “100 Years, 100 Laughs” compendium, and was among the first group of films selected for preservation in the National Film Registry by the Library of Congress.

The film, a political satire and black comedy harping on Cold War fears and shot in black and white, features its cast — including Peter Sellars in three roles — playing straight against increasingly farcical attempts to avoid nuclear destruction. Quips like “Gentlemen, you can’t fight in here — this is The War Room!” have long since entered the collective pop culture consciousness, and according to critics, the film remains as funny and razor sharp today as it was in 1964.

“Dr. Strangelove” earned four Oscar nominations: best picture, best screenplay, best direction for Stanley Kubrick and best actor for Peter Sellars. The film actually brought about policy changes in the U.S. to ensure that events depicted in the film could not occur in real life.

“Dr. Strangelove” will be screened at 12:30 p.m. on Saturday, July 27, at the Little Art Theatre. The screening will be followed by a Q&A session with Yellow Springs Mayor Pam Conine. Tickets are $7. For more information, visit http://www.littleart.com.