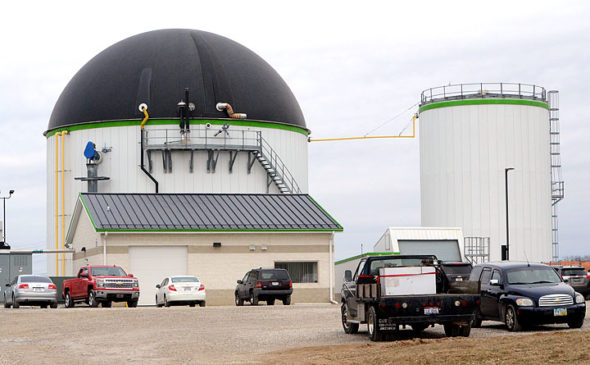 A biodigester four miles west of Yellow Springs is hoping to add two large storage ponds to its facility.

In May, Dovetail Energy, which operates the biodigester, applied to the Ohio EPA for a permit for the two open-air ponds, where 32 million gallons of treated sewage sludge, also known as biosolids, would sit until they are able to be spread on area farm fields. Currently the facility has a single, five million gallon pond.

During an Ohio EPA public hearing last week, neighbors of the biodigester and other area residents expressed concerns about possible contamination to the groundwater, surface water and air from the proposed ponds. Others said that area wells and streams are being polluted from runoff coming from farm fields treated with biosolids, which is especially concentrated around the biodigester. 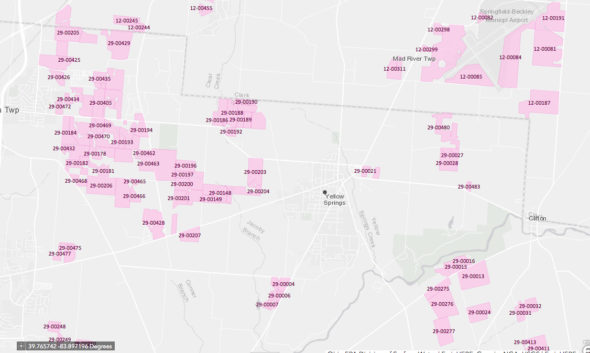 Image from the Ohio EPA showing a concentration of land-applied biosolids in Bath Township, at left; the full interactive map is available here: https://oepa.maps.arcgis.com/apps/webappviewer/index.html?id=40d4dfa29d0b48d49dfe54b543371813

Company officials previously have told the News that its facility produces fertilizer that meets EPA requirements and that the process is a more sustainable way to deal with waste than landfills because it produces electricity and kills pathogens during the process.

By phone this week, Ohio EPA spokesperson Dina Pierce said that the agency can only look at whether the proposed design meets “applicable state regulations and engineering standards” of the ponds and not at the issue of land application of biosolids. In response to a question about a 2018 EPA study concluding that the agency’s controls may not be fully protective of human health and the environment, Pierce said that the Ohio EPA can only regulate within existing law.

“It’s an approved process right now,” said of the land application of biosolids. “It’s an accepted practice around the world.”

The Ohio EPA is taking comments on the proposed permit through July 3. Comments should be emailed to epa.dswcomments@epa.ohio.gov

To view the permit, visit: http://edocpub.epa.ohio.gov/publicportal/ViewDocument.aspx?docid=1074547

For more on the biodigester, read this News article from March 2018 on a proposed expansion: https://ysnews.com/news/2018/03/digester-upgrade-stirs-debate