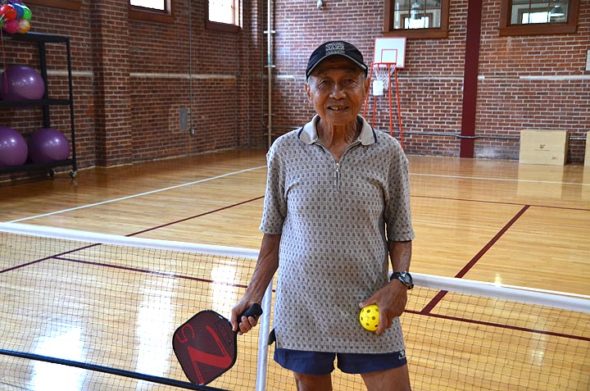 Longtime villager Tjioe Kwan, 78, came home from the National Senior Games in Albuquerque last month with a gold medal in pickleball. He plays locally at several gyms, including the Wellness Center at Antioch College, where he’s pictured on a pickleball court. (Photo by Audrey Hackett)

“I did better than I expected,” he admitted in a recent interview.

Kwan competed in three events in his chosen sport of pickleball: mixed doubles, men’s doubles and men’s singles. He placed first in singles and fourth in mixed doubles, playing with Joanne Harris from Springfield.

He came home with a gleaming gold medal shaped like a hot air balloon, a nod to Albuquerque’s famous balloon festival.

The National Senior Games is a 20-sport competition geared to women and men 50 and over. With more than 10,000 participants, it’s the largest multi-sport event for seniors in the world, according to the organization’s website.

Kwan qualified for the National Senior Games through a stellar showing in the 2018 Ohio Senior Olympics. Three first-place wins at the state level allowed him to advance to the national tournament. This was the second time he’d taken part in the biennial National Senior Games, having previously competed in 2017. He didn’t snag a medal that year, but his second attempt proved a charm.

“I thought, I’m older and I’m certainly not going to do any better this time,” he said, chuckling.

“I’m not necessarily the best player in my age group, but I survived better,” he said, noting that the competition took place outside in the blazing New Mexico heat.

Asked how other players might characterize his playing style, Kwan paused and spoke thoughtfully.

“They’re always surprised that I’m quicker than I should be at my age,” he said. “Other people are power players, but I have more finesse.”

Kwan has been playing pickleball for about five years, locally at the Wellness Center, where the game has a lively following, as well as at the Xenia and Springfield YMCAs. A cross between badminton, tennis and ping pong, pickleball was invented in 1965 and is now one of the United States’ fastest growing sports, according to the website of the USA Pickleball Association. The game is played with a hard paddle not unlike a ping pong paddle, and uses a plastic ball with holes resembling a wiffle ball.

“It’s like ping pong played on top of the table,” Kwan explained. “If you play any racket sports, it’s easy to pick up.”

Kwan himself has been an avid player of tennis, ping pong and racquetball since his youth. He grew up in Indonesia in an ethnic Chinese family. Life was difficult at times amid political and social turmoil in that country, according to Kwan. Like other Indonesian citizens of Chinese descent in the multi-ethnic nation, his family faced persecution and sought to blend in by changing their last name. Kwan, who came to the U.S. for college in 1960, retains his family’s Chinese surname.

He has lived in Yellow Springs since 1970. Hired by Antioch College to fill in for a mathematics professor on sabbatical, Kwan ended up teaching at Antioch for four years. He was then hired by Wilberforce University, where he taught mathematics until retiring about six years ago. And he has lived in Yellow Springs all these years; he and his wife raised a daughter and son in the village.

“We just liked the town and wanted her to grow up here,” he said of his daughter, who now lives in Texas, but recently brought her own daughter back to Yellow Springs to attend Glen Helen’s ecocamp. Kwan’s son lives in Springfield, while extended family members live all over the world.

Most days, Kwan can be seen on his bicycle around town — often on his way to the Wellness Center. He plays pickleball about five times a week at different area gyms. It’s a way to stay active and make friends, he said. But he also admits to a taste for competition.

“I’m one of the more competitive players,” he said. “I’ve always been that way.”

And now he has a national gold medal to prove it.