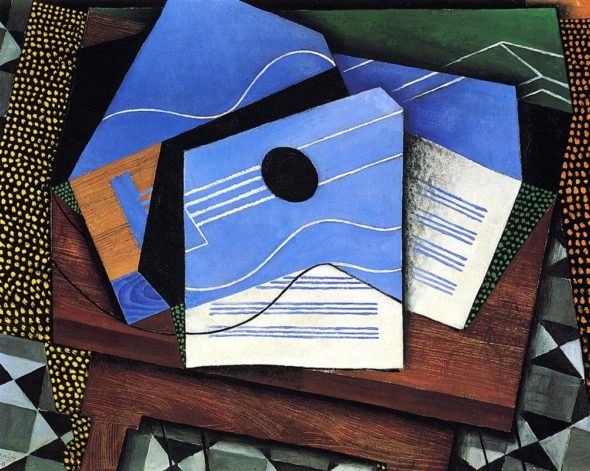 First Lines — The world of objects

Is this a fanciful world, or the world as it is? Poems are wonderful places to ask these kinds of questions — or maybe, and more powerfully, to just experience their answers and effects. The French surrealist poet Francis Ponge has been called a “poet of things” because of his meticulous attention to the world of objects — a door and a plate, a pebble and a piece of soap. Things have dignity and presence in his poems; they appear as themselves, and that is enough.

I thought of Ponge’s poems when I read this month’s poem by Reilly Dixon, a writer, graphic designer, gardener, winemaker and more. Reilly began working as a designer for the News this spring, and only after several months of laying out pages did he let slip another of his talents: poetry. He submitted four poems to consider for the column, pieces he wrote a couple of years ago as a graduate student in a poetry seminar at Wright State. I am happy to offer one here.

“A Material Desire” contains a kind of surprise, or a puzzle. It renders a consciousness that is familiar in its joys and longings, yet also a little different, a little shifted. Who is speaking? What does the speaker want? These staple questions of poetic analysis have unexpected answers. I felt pleasantly, and thought-provokingly, disoriented by Reilly’s poem. I enjoyed its diction, its images, its sturdy form. 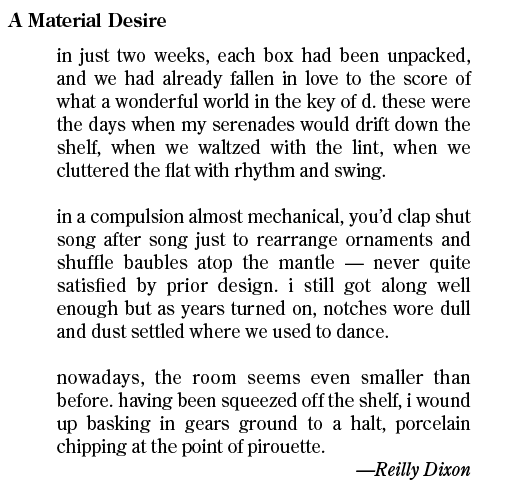 The poem opens with the unpacking of boxes, and tracks the thrill of use followed by the lull of disuse. Fittingly, its stanzas take the form of stacked boxes, each a discrete unit. The “boxes” are static, yet the words within them jostle and flow: “cluttered the flat with rhythm and swing”; “clap shut / song after song”; “porcelain / chipping to the point of pirouette.” The poem’s use of lower case quickens the pace — our eye travels at one height on the line — and lends, to my ear, a kind of modesty to the speaking voice.

Who is speaking? Reilly says this about his approach to poems: “I often try to be in a place that wouldn’t normally allow me to be there. … I imagine living within a particularly large space or a small space. Trapped in a wine bottle, for example.” In this poem, the speaker isn’t explicitly identified, but can be inferred. One of the strongest clues comes in the second “box”: “in a compulsion almost mechanical, you’d clap shut / song after song.” Another clue comes at the poem’s end: “basking in gears ground to a halt, porcelain / chipping at the point of pirouette.”

But more than the delight of “figuring out” the poem’s speaker is the novelty of actually being inside its “mind.” Or to take the poem’s premise seriously, its mind, no quotes. In this mind, the object is a full participant in the life of the flat — and why not? It is the source of waltz and dance! I love the sly characterization of the human presence in the poem (the addressed “you”) as “almost mechanical.” And I grieve, just a little, at the dusty disuse that is the fate of objects. But isn’t it also the fate of us?

Reilly and I spoke about the complex feeling that emerges at the end of the poem. Alongside wistfulness, I sense a (silent) note of something like relief. If a music-box ballerina is a kind of twirling Sisyphus, as Reilly says he envisions her, isn’t there a sweetness in having one’s hard-working shoe finally come to rest? Isn’t there a part of us, too, that craves such release?

What do objects want? That is a question this poem ponders, and in pondering, brings us more fully into the non-human reality we live with and rely upon, covet and forget, touch and love.

*This column originally appeared in the July 25 issue of the News. To read other First Lines poetry columns, visit the archive page here.