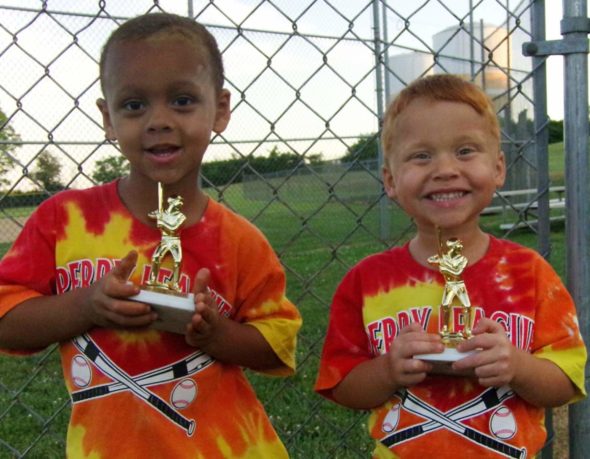 Cayden and Colton Maloney proudly pose with their Perry League trophies at Gaunt Park on Friday, Aug. 9. The T-ball game was the final one of the summer season, which was celebrated, as it is every year, with a potluck dinner and the awarding of trophies to every young player in attendance, whether they’ve played all season or just for that evening. (Submitted photo)

The 49th season of the Perry League came to a close in a loving and glorious way. More than 60 children came out for a final night of play, a potluck wiener roast picnic and the grand finale of the awarding of Perry League trophies.

Thomas Stratton said, “I remember my best night,” which was the night he hit the ball over everyone’s head, a classic home run hit. Amandine Bouquet Sabre, 5, chased balls, gathered balls, threw balls back to Tanner Miller, 8, who was throwing them out from the first base line. Amandine even occasionally gave a ball to me at home plate, her eyes sparkling with delight and mischief every step of the way. Amelia Linse, 6, was back from a leg injury, which could have been, and thank God it wasn’t, a broken hip. She was gathering balls again with her sidekicks, Natalia Ramirez, 7, and Paige Cark, 9.

Little Kristoff Pavick, 3, came to the plate, and when Layla Nelson, our superiorly wonderful on-deck circle coach, introduced him as Little Kristoff, he immediately repeated it.

Arthur Hall, 2, accompanied by his mother, Anna Haller Hall, his dad, Ben, and his grandmother, Donna Haller, was a fount of joy and confidence, looking me eagerly in the eye and then hitting that darn ball in just two swings.

Topher Besson, 3, hit well from a spread-legged stance in which he hunkered down a bit, looking quite serious and sophisticated. Tanner Miller was our principal person throwing balls out to the kids from the first base line. He said he didn’t bat because his dad, Sam, thought he hit too hard (Tanner plays in the Little League), which might endanger some of our 3-, 4- and 5-year olds. Tanner was cool with that, not resenting not being able to bat.

Violet Ficke, 4, and Amber Ficke, 3, continued to hit and field well under the as usual living guidance of their dad Kyle, while mom, Heather, snapped their picture on her smartphone.

Reese Tobias, 4, again impressed me with her look of athletic sophistication. Both her dad, Zack, and I were delighted and a bit astounded by her skills — like how well she bats, holding the bat like someone 14, not 4, swinging with power and precision. I know that might sound exaggerated, but it is not. She is a little powerhouse. Remember Mighty Mouse, the cartoon character with super powers? That’s our Reese.

Jack Rudegeair, 3, was back with his dad, Shawn, and his grandfather, Lance. Jack is one of those miracles of human potential and possibility and actuality: a natural athlete in form and function, a little Adonis on the diamond.

Sebastian Valdez-Malishenko, 6, was animated like a Fourth of July sizzler, happy to be there, happy to be in his own skin, delighted by all the running, swinging, catching and plopping and sliding on our diamond, so beautiful. His mom, Myra, and grandfather, Tucker Malishenko, watched, their joy and pride a four-dimensional force for good. As in Good.

Julia Camard, 5, wanted to own every ball and to blow my whistle, wanted to run the field from stem to stern, surprising, as she often does, after hitting a nice grounder, by not moving, not running to first: “I can’t run,” she announced, and with no further explanation, she walked back to the bench.

Paige Clark calmly came to the plate, hit a nice grounder through the feet of kids in the middle of the field, and was suddenly racing lickety-split to first base — and then spent much of the rest of the evening running at 90 mph all over the diamond, chasing a million balls, her face lit up like a billboard.

Leyna Badger, 6, said “HI!” as she reached the plate. Her tone was one of surprise, as if she hadn’t expected to see me up there. Naomi Zunker, just 3, after getting help from her dad, Carl, did it on her own. I see this often, parents being loving and solicitous, helping their child bat, and the child saying, often quite decidedly, “I want to do it myself!” Well, Naomi wanted to do it herself and Carl was fine with that. As soon as he stepped back, Naomi did it on her own: she hit the ball well, knocking it into the field. A hit! Yes! Yes! Yes!

Erin Fink, 8, played, but was still feeling a little under the weather. She woke up that morning, she said, not feeling too good. She looked pale and a bit pained. But she perked up when she saw her mom leading, lifting and guiding her 2-year-old sister, Sarah, into third base. Laughing softly, happily, she headed out to meet them.

Collin Martz, 5, and Eleanor Martz, 3, were here for their first potluck picnic trophy night. Clay Husk told me his picture was in the paper, in the education supplement section. He and four other T-ball darlings gave me handmade and hand painted thank you notes. Clay’s was a giant orange baseball with “Clay (heart-shape) Jimmy.” Brody Bistline’s card had a boy hitting ball into a giant seven-color rainbow with his coach smiling nearby. Brody’s siblings, 3-year-old twins Ella and Parker, made cards, too: lovely, scribble-scrabble drawings in six or seven different highlighter colors, thanking me for being a great coach. Jamie Newton, 5, gave me one as well. He drew me, a ball and himself holding a bat.

These thank you notes are the crème de la crème. When a child gives you their love and takes time to make a card expressing that love, you are blessed. Getting these cards are holy moments. They’re beautiful, the love pure and freely given. The impact, if only I were to pay proper attention, is profound and transforming. I am a better person, holier, healthier, happier, because of these moments of love. Thank you, Clay. Thank you, Brody. Thank you, Ella. Thank you, Parker. Thank you, Jamie.

And so, too, am I enlarged and made better by this Perry League itself, a program we pay for ourselves — we spent $2,300 this year, buying T-shirts, ball caps and trophies. In selling T-shirts, we raised $1,400, and on the final night of the season we needed yet to raise over $700 to balance our budget and to replenish our bank account so we could play some T-ball again next summer.

It’s a program of love and kindness, where the focus is on the children and their having fun. And one of the most wonderful things about this program and its many families is how loving and kind, patient and giving so many of these people are, people always generous and supportive, helping on the diamond, on the bench, in the stands, giving freely and abundantly. One critical way this generosity is shown is in the giving of dollars to the program. And last Friday night, Aug. 9, we needed to raise at least $300 to make it possible for us to have a 2020 season. The Perry League family of kids, parents, grandparents, brothers, sisters, aunts, uncles, volunteer coaches and potluck cooks, chefs and food preparers saw and heard the need and dug deep. By the end of the evening, we had received, been given, $655.11. And overnight, another $250 was donated via PayPal. We had needed $732 to break even ($300 to squeak by), and our wonderful friends and supporters ended up donating $905.11!

And that’s our amazing and startling Perry League, Yellow Springs’ T-ball program for all children 2–9 years of age, regardless of their race, color, creed, sexual orientation, ethnicity, spiritual inclination or practice, ability or disability. We are humbled by and happy with our 2019 season, our 49th year. We look forward to next summer, when we can celebrate our 50th anniversary. We hope to see you there.