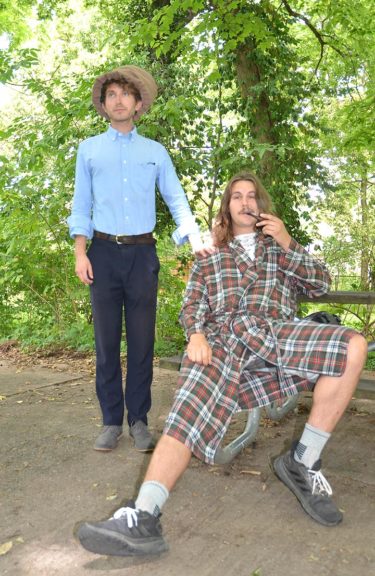 Eliot Cromer and Adam Zaremsky pose with props in Beatty Hughes Park. The duo will present a sketch comedy show, “Wistful Meanderings of the Petty,” on Friday and Saturday, Aug. 23 and 24, beginning at 8 p.m. at the YS Arts Council. (Photo by Lauren "Chuck" Shows)

As Elliot Cromer and Adam Zaremsky walked together into Beatty Hughes Park  in downtown Yellow Springs this week, they said in unison — as though the thought had struck both of them at the same moment — “I’m glad they didn’t turn this place into a parking lot!”

This kind of tandem thinking is no doubt helpful when they perform together, as they will do on Friday and Saturday, Aug. 23 and 24, when they present “Wistful Meanderings of the Petty,” a sketch comedy show, sponsored by and held at the YS Arts Council.

The duo have been performing onstage together since they were kids, beginning with YSKP and continuing through middle and high school — they both graduated from YSHS in 2011. The two even worked together onstage at Kenyon College, which they both attended. Zaremsky reckoned the duo have performed together in 24 full productions.

“At least that many, maybe more,” said Cromer.

At Kenyon, Cromer majored in film and Zaremsky studied psychology, but they said they found ample time to take to the stage while they were there, performing in shows like Euripedes’ “Bacchae,” “The Rocky Horror Picture Show” and abridged versions of Shakespeare’s works as part of the Billy Shakes Project. Cromer was also part of a sketch comedy group, Beyond Therapy, and he found an effective way to pull Zaremsky into his sketch comedy orbit.

“I more or less just brought Adam into the group by writing him into sketches and making him perform,” Cromer said. “Adam was never officially part of the group, I just told people he was coming.”

“Yeah, I don’t think I ever auditioned,” added Zaremsky.

The two actors said they’ve been working on sketches since they both moved back to the village. After months of talking about putting together a show, they decided to bite the proverbial bullet now when energy is high.

The show — on which the duo chose not to elaborate in terms of general theme and content — was described by Zaremsky as farce.

“I like to emulate the Marx Brothers,” Zaremsky said. “That kind of comedy is very easy for us to approach.”

“It’s high-pace, high-energy,” added Cromer. “Some productions would boast themselves as being very grounded in reality. I would say we have maybe two fingers touching reality during this sketch program.”

The show will last about an hour, and both actors stressed that they wouldn’t recommend the show to anyone under the age of 14, due to what they dubbed “lewd circumstances.” The show will also feature a live band, with Isaac Haller on drums, Nathaniel Reed on keys and Eric Rudolf on guitar, playing before the show and during scene transitions.

Cromer said that he wrote the majority of the sketches included in “Wistful Meanderings of the Petty” in their initial forms, but that his sketches tend to change once he’s brought them to Zaremsky, and in that way, the sketches are collaborative in their inception.

“Some sketches we even talk out rather than writing,” Cromer said. “We’ll just be in a room, going off ideas and making each other laugh, and that’s another way a sketch might get written.”

“When I write for him,” said Zaremsky, “I basically think, ‘What do I want to see him do?’”

Cromer and Zaremsky described the show as scripted, but “loose” — they know what they’ll say and do, but they like to leave room for some improvisation.

“It depends on how the audience reacts,” Cromer answered. “If they really like a joke, we might just keep hammering at it until they stop laughing.”

When asked if they’d always been told they were funny, both men agreed, if somewhat sheepishly, but said that they decided to chase that feeling.

“If someone tells you you’re funny, it’s like, ‘Great! Now let’s figure out how to be even funnier!’” Zaremsky said. “It really was a good motivator.”

“The whole town really nurtured us [as we were growing up] in that way,” agreed Cromer.

This nurturing is one of several reasons Cromer said he loves YS audiences — with others being that they love a good time and are historically supportive of art.

“They want to be involved, and they’re not on their phones during performances,” Cromer said. “They’re there to see the artwork.”

Outside of working on comedy together, both actors are keeping their stage chops sharpened at other venues — Cromer performs seasonally as part of The Wyld Men, a mud show troupe based at the Arizona Shakespeare Festival, and in January of this year, Zaremsky performed in three of the seven offerings in the 10-Minute Play Festival. He said he hopes to continue acting in community theater as time allows.

At this admission, Cromer piped up: “Though I do think Adam should get paid to act. Well, all actors should.”

To that end, the performance of “Wistful Meanderings of the Petty” will be free, but there will be a donation box, where folks who enjoyed the show can drop a little remunerative appreciation.

The two said they’re drawn to comedy not only because of its ability to both comment on reality and help one temporarily escape from it, but because there’s really nothing better than a good laugh.

“I think that laughter is the best thing in the world, and I would love to see someone argue that it isn’t,” Cromer said. “A laugh is really a reaction to a genuine surprise. I think that’s the purest form of living.”

“And there’s joy in it,” Zaremsky said. “The joy is in the surprise.”

Cromer went on to add that comedy is transactional, so it’s predicated on a certain amount of risk.

“We label ourselves as comedians, but I think of us just as much as stuntmen,” Cromer said. “Performing a comedy show is risky — we could very well bomb on stage for a full hour. You could come and see us lose all social credit during that time — or you could see us rise to the top and succeed.”

“But doesn’t that sound thrilling?” said Zaremsky, cutting in, throwing his arms wide and waggling his eyebrows like a carnival hawker. “Doesn’t that sound like something you just have to be there to witness?”

“Wistful Meanderings of the Petty,” sketch comedy by Elliot Cromer and Adam Zaremsky, sponsored by the YS Arts Council, will be performed Friday and Saturday, Aug. 23 and 24, at the YS Arts Council, at 111 Corry St. Performances will begin at 8 p.m. each evening, with doors open at 7:30 p.m. Admission is free, and donations are appreciated.