Yellow Springs Schools has undergone some significant personnel changes at the administrative level in recent months, but students starting the new academic year this week will see mostly familiar faces in their classrooms and hallways.

With new Superintendent Terri Holden and Interim Treasurer Tammy Emrick in place in the district offices across the street from Mills Lawn Elementary School, local students won’t experience a lot of staffing changes.

Only two newly hired teachers are joining the district — one at Mills Lawn and one at Yellow Springs High School — for the 2019–20 school year.

Alison Hawker will be teaching physical education at the elementary school, replacing Robert Grote, who has taken a similar position at an elementary school in Kettering where his wife also teaches.

And Hannah Weinstein will be teaching U.S. history half time at the high school, picking up part of social studies teacher Kevin Lydy’s classroom load as he takes on the new half-time role of project-based learning coach.

The low turnover rate of local teachers is “a testament to the fact that Yellow Springs is a nice place to work,” Holden told the school board during their most recent regular meeting earlier this month.

“It’s critical for schools to have a stable work force,” she said. 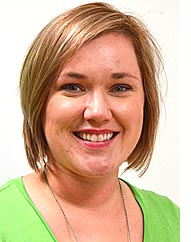 Hawker comes to Yellow Springs after a decade in Ashland, Ky., where in fall 2017 she was named elementary physical education teacher of the year by the Kentucky Association for Health, Physical Education, Recreation and Dance.

In an interview last week, Hakwer said her move to Ohio this year was precipitated by her husband’s recent hiring as part of the pastoral team at Salem Church of God in Clayton.

The couple have two daughters, ages 5 and 2, and Hawker said they’re all staying with her in-laws in Xenia until they can move into a permanent home.

Having family in the area added to the appeal of relocating to Ohio, said Hawker, who grew up in Florida. She said she already had some familiarity with Yellow Springs, having come here over the years to hike in the Glen and get ice cream at Young’s Dairy. “Go to Peifer’s, the sunflowers — all the fall things,” she said.

A serious tennis player in high school and college, Hawker said she was interested in studying exercise science as an undergraduate at Warner University in Lake Wales, Fla.

“I wasn’t thinking of going into teaching,” she said, until her classes took her into some local schools to observe the PE teachers there.

She was inspired by the direct influence the teachers had in promoting healthy habits and improving the lives of their students.

Her approach is holistic, in that Hawker believes gym time isn’t an isolated part of students’ experience. She is interested in developing the whole student, and toward that end, she earned a master’s degree focused on reading instruction.

Connecting the gym to classroom subjects is important for students’ overall growth, she said.

She said she is excited about the local district’s emphasis on project-based learning, which she anticipates will foster a variety of classroom collaborations and community partnerships.

“It’s just amazing how it can impact students,” she said. 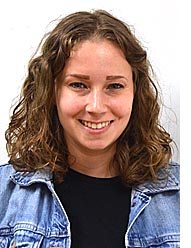 Hannah Weinstein will be teaching U.S. history at the high school. (Photo by Carol Simmons)

Hannah Weinstein also is excited about diving into project-based learning.

Her subject, history, has unlimited possibilities, she said.

And she said she looks forward to connecting with people in the community on future projects.

A native of Chicago, Weinstein earned her bachelor’s and master’s degrees at Ohio State University.

Inspired by her high school math teachers, Weinstein said she knew she wanted to become a teacher too.

“I just had some really amazing teachers, and I wanted to give that back,” she said in an interview last week.

She said those early mentors inspired her to enjoy math, even though it hadn’t come naturally to her.

Weinstein even thought for a time that she might teach the math-based subject of physics — either that or history, she said.

She said she soon realized, however, that her talents lie more securely in the history field.

The lessons of history are always relevant, she said.

“It’s really important to teach about the past and how it impacts [students’] futures,” she said.

And she scoffs at those who say history is boring.

After finishing graduate school, Weinstein taught for three years in Columbus-area charter schools, before taking the position in Yellow Springs.

She and her boyfriend, who is starting a pharmacy residency at the Dayton VA, recently moved to Beavercreek.

“I had heard really wonderful things about Yellow Springs,” she said.

But she’s most excited about meeting her students.

“The best part of being a teacher is the relationships I build with students,” she said.