Friends Lucas Hudson and Zoren Egea-Kaleda, who this summer launched an original brand they call Soupçon, will present their new fashion line of silk-screened T-shirts and one-of-a-kind clothing items at a pop-up show Friday, Aug. 2, from noon to 7 p.m., at Wildflower Boutique downtown. (Photo by Carol Simmons)

Friends Lucas Hudson and Zoren Egea-Kaleda  knew that launching a new DIY brand from Zoren’s basement bedroom would present a variety of challenges, but the recent high school graduates are working through them with no small amount of determination.

DIY stands for do-it-yourself. While the ethos of building and making personal goods from local or recycled sources has a long social history, the mindset has been embraced by contemporary youth culture, particularly in regards to clothing and music.

That’s the emphasis for Hudson and Egea-Kaleda. Their brand, named Soupçon, is primarily focused on fashion, but their venture has a musical component as well. 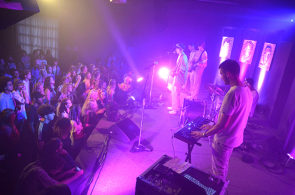 An evening of music, fashion and art on July 6 at the Brightside venue in Dayton launched the Soupçon brand founded by friends Lucas Hudson and Zoren Egea-Kaleda. Shown above is local band Hypemeter, with hanging artwork by Sumayah Chappelle. (Photo by Matt Minde)

Hudson, who returns to Yellow Springs each summer after moving with his family to England two years ago, said earlier this week that he began thinking about creating a brand and building a website for it this past winter.

Hudson presented the idea to longtime friend Egea-Kaleda when he came back to town this summer.

While Hudson, 18, said he didn’t give a lot of attention to his personal fashion growing up, Egea-Kaleda, 19, said that the clothes he wore had meaning for him.

“I always liked clothes, if I could put what I felt on the inside on the outside,” he said.

The pair have spent the summer building a fashion line that features original silk-screened, dyed T-shirts and what they call “1-and-1s,” one-of-a-kind pieces of clothing made out of thrift store finds and fabric scraps.

Their plan is to sell the clothing online and through “pop-up shows,” which are one-time events held in various settings.

They’re planning one such pop-up show this weekend, Friday, Aug. 2, from noon to 7 p.m., at Wildflower Boutique downtown.

Danyel Mershon, Wildflower’s owner, said she is happy to provide a venue for the young men, who approached her about the possibilities of doing a show.

“I was beyond impressed with these kids,” she said this week.

“I want to support local [efforts] and support local kids. And I love doing collaborations,” she said. “So I said, ‘absolutely.’”

And each of the clothing items feature the Soupçon logo, which the young men apply in a basement construction space dominated by a ping-pong table that serves as an ironing board and work station.

Nearby is a plastic bin filled with thrift store purchases ready for repurposing.

“We cut them up and make new things,” Hudson said.

For inspiration, “I just take from my personal experiences,” Egea-Kaleda said.

At the same time, music also serves as a major inspiration, both agreed.

Friday’s pop-up show follows an event earlier this summer at the Brightside performance venue in Dayton. The young entrepreneurs rented the facility and showcased a slate of area musicians, each of whom wore Soupçon clothing as they performed. Adorning the walls was artwork by Yellow Springs High School student Sumayah Chappelle, who also will have work on display at Friday’s show.

The Brightside event captured the youth DIY spirit in its showcasing of original music, clothes and art. Hudson and Egea-Kaleda considered the evening to be the official launch of the Soupçon brand.

And Friday’s pop-up will be the first of what they hope will be a growing enterprise as they build their fashion line.

One of their goals as they move forward, they said, is to make their clothes as ecologically responsible as possible. While they started out using commercial dyes and paint products, they are currently learning about natural processes as well.

Hudson’s anticipated return to England this weekend, after the show at Wildflower, won’t slow them down either, as Egea-Kaleda plans to join him there sometime in the near future.

The pair, mostly self-taught, said they want to take some courses in construction and design at a fashion school in London. This summer, they turned to YouTube videos and books for assistance, though they also consulted with some older villagers, particularly about sewing and dying. Debbie Henderson and Jackie Muhall have been especially helpful, they said.

They said their brand name, Soupçon, doesn’t have any special meaning for them. They just liked the sound of it.

The name, which means a small portion of something, has unfortunately generated some questions and criticism in town this week, as stickers and fliers bearing the Soupçon logo appeared pasted on poles, signs, trash cans and store fronts throughout the downtown area.

Hudson said that he and Egea-Kaleda hadn’t meant to cause any problems with the promotional materials.

“We had given out stickers to a bunch of people about a week ago with the intent of spreading the brand name to other teenagers,” he said.

“We didn’t expect people to put them all over town at all. I apologize to any shop owners and local vendors if the stickers were placed inappropriately,” he added.

Both Hudson and Egea-Kaleda said that they are excited about the event at Wildflower and are looking forward to showing the fruits of their summer’s work.