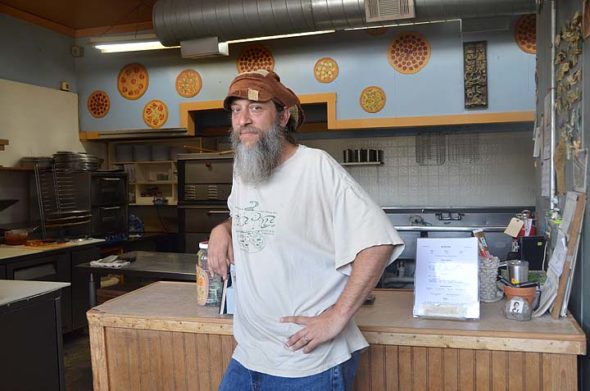 Villager B.J. Walters is looking for buyers for Ha Ha Pizza, the popular Yellow Springs eatery he’s owned since 2005. Ready to move on, he’s hoping to sell the business to local residents who can continue the 44-year-old Ha Ha tradition. (Photo by Audrey Hackett)

Ha Ha Pizza up for sale— What price a slice?

Ha Ha Pizza is up for sale.

There’s no sign out front — yet — but villager B.J. Walters, who’s owned the popular pizzeria since 2005, is looking to pass the business onto another owner.

“I’m ready for the next chapter of my life,” he said this week, seated in a corner booth at the restaurant’s colorful dining room.

Walters, 43, has been preparing to sell Ha Ha Pizza for a while. Previous efforts to sell to employees he’d “trained up” to take over the business didn’t pan out, he said. So as of last week, he’s opened the process to buyers outside of the business. He’s concentrating first on those who live in the village in hopes of finding a local buyer.

“I’m only speaking with locals at the moment,” he said.

Walters declined to disclose his asking price, which is based on the business’ income and assets. The business is “very profitable,” he said. Assets include everything from its furniture and kitchen equipment to its reputation and closely guarded recipes. While Walters has a price in mind, his goal is to sell it to the right buyer who will continue the pizzeria that for 44 years has been a rich piece — a slice — of village life.

“I’m looking to match the people, the place and the money,” he said.

Walters added, “I’m not looking to fund my retirement. I want this to carry on.”

Ha Ha Pizza was started in March 1975, by three students from Antioch College. An article in the Antioch College newspaper in August of that year claims that the pizzeria was “already an institution in the area,” offering an alternative to Young’s for those besieged by the late-night “munchies.”

The article also notes that the founders were revising their views of capitalism “from one of negativism to one of sympathy to other businesses.”

Ha Ha Pizza was well enough established in its first year to advertise in the Yellow Springs News. An ad in one 1975 edition of the News promises “free delivery,” something the business no longer does.

Walters, who grew up just west of Dayton, began at Ha Ha as a dishwasher in 1997, and worked his way up. He purchased the pizzeria in 2005 from his onetime boss and mentor, Larry Lookabaugh. The business was profitable enough that he was able to buy it outright in four years.

Walters figures he is somewhere between the fifth and seventh owner the pizzeria has had in 44 years.

He has preserved many aspects of the eatery during his ownership, including its passed-down recipes for dough and sauce, kept “in a little black book in a secure location,” he said, with a serious look.

While brands and suppliers have changed, he has kept as faithful as possible to Ha Ha’s proprietary recipes — and not just for the dough and sauce. The little black book details everything from how to chop red onions for the salad bar to how to slice sandwich meats.

Walters also put his own stamp on the pizzeria. He remodeled the dining room, with an emphasis on bright colors and a modern look, and began offering wall space to area artists. For most of the past 14 years, Ha Ha has featured changing exhibitions of art each month. With a new focus on the dining-in experience, Walters discontinued Ha Ha’s delivery service.

The pizzeria currently has more dine-in business than carryout customers, he said.

Walters installed air conditioning and a walk-in cooler, as well as streamlining kitchen operations “to make pizzas faster” — something the restaurant needed to do as its popularity grew.

Growing the business was a longtime dream, but Walters found it tough to effectively manage both locations.

“It distracted me from this place,” he said of the demands of a second location. “I couldn’t let this one falter.”

He closed the Xenia pizzeria after two years. But he remains convinced that the location could be viable, with enough time and focus.

“It would still be open if there were two of me,” he joked.

Ha Ha Pizza currently employs 10 people, a mix of full- and part-time staff. While some employees have been with the pizzeria for up to 10 years, the business tends to attract younger workers, who turn over more frequently.

Nurturing relationships with employees and customers has been Walters’s greatest joy in running the restaurant.

“I love watching kids grow up, and maybe I’ve influenced or helped them in some way,” he reflected.

“Hopefully I fed them good food,” he added.

Yet managing employees has also been an area of challenge and growth.

“As all business owners will tell you, it’s hard to try to teach someone your viewpoint and help them carry it out,” he said.

He’s learned a lot about other people, and himself, in the process.

“I wake up every day learning something about humanity,” he observed.

Popular with villagers — not just college students — from the start, Ha Ha Pizza now attracts a mix of locals, out-of-town regulars and tourists. Business is seasonal, following the ebbs and flows of the tourist trade.

“January and February are our slowest months. But a nice sunny day of 60 degrees or more, and we’re going to be busy,” he said.

How many pizzas does Ha Ha dish up in a day?

Saturdays during summer tourist season are the busiest times.

“We’re busy from open to close, making pizzas as fast as we can. There have even been a few Saturdays where we’ve run out of dough,” he said.

Given that pace, Walters has no immediate plans to start another venture. Instead, he intends to slow down: to spend more time with his wife, Victoria, and their children Leif, 15, and Emmit, 10, and to get back to one of his sidelined hobbies, fishing.

Asked where he intends to cast his line, he replied, “Wherever there’s water.”

Some customers aware of his plans to sell have expressed concern that Ha Ha Pizza will change under new ownership.

The restaurant has been remarkably stable in some ways, with its name and location — and, perhaps, its laid-back vibe — unchanged since 1975.

New owners will make the pizzeria their own, Walters conceded. But he believes the essence of the restaurant will stay.

“I don’t think anyone would purchase the business and change too drastically what it is,” he said.

In fact, Walters is working with his landlord, Bob Baldwin, to revise Ha Ha’s lease to stipulate that the location remain a restaurant.

And while he’s not sure who his successor will be, Walters has a few ideas about an ideal owner for Ha Ha’s next phase.

“It would be someone in love with the town, and with Ha Ha itself — with its legacy and history,” he said. “Someone who has ideas of where to move forward from here.”