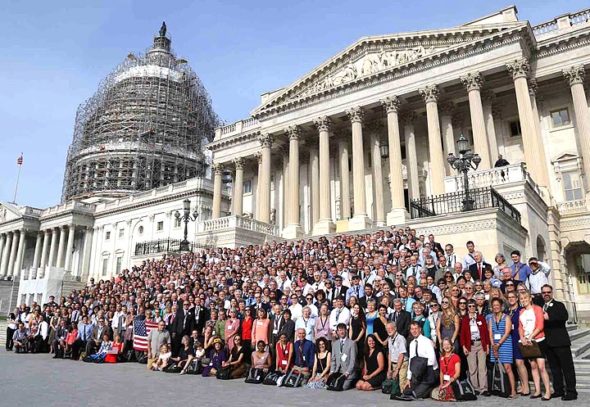 Members of the Citizens Climate Lobby, or CCL, gathered in Washington, D.C., earlier this year to lobby members of Congress for substantive and effective climate change legislation. On Thurs., Oct. 31, Elli Sparks, national director of field development for the CCL, will speak in Yellow Springs, from noon–2 p.m., at the Vernet Ecology Center at Glen Helen. The event is free and centers around civic engagement to mitigate the effects of climate change. (Photo courtesy of the Citizens Climate Lobby)

Elli Sparks, national director of field development at the Citizens’ Climate Lobby,  flew into Toledo last Tuesday to deliver the first of several lectures on organizing and lobbying for the environment. She hasn’t stopped since.

Speaking to the News via telephone from Youngstown, Sparks laid out her itinerary: Toledo, Oberlin, Columbus, Marietta, Oxford and Yellow Springs.

Sparks will be speaking in Yellow Springs on Thursday, Oct. 31, from noon to 2 p.m. at the Vernet Ecology Center at Glen Helen. The event is free and the subject of her discussion is how the Citizens’ Climate Lobby, or CCL, works to lobby elected officials to act on behalf of the environment, and to mitigate the effects of climate change.

“What we’ll be talking about is primarily the work the CCL is doing in Congress right now,” Sparks said.

Since its foundation in 2007, the Citizens’ Climate Lobby has worked to train and organize volunteers to advocate for legislation to address the climate crisis. Since 2007, the group has grown to include 425 U.S. chapters and more than 100,000 members.

The group’s approach is pragmatic. It is pushing for carbon taxation — a progressive idea. The bill the CCL is currently championing is House Resolution 763, the Energy Innovation and Carbon Dividend Act.

“We’re focused on building bipartisan support for [H.R. 763],” Sparks said. “And [this] is the bill that’ll get the job done in curbing carbon emissions.”

The bill, introduced in January of this year by Rep. Ted Deutch (D-FL), would institute a tax on carbon — $15 per metric ton of CO2 — at the point of extraction: oil fields, frack sites and the like. It would also introduce a border carbon adjustment on imported products — a tax meant to discourage companies from moving abroad.

“The discussion is going to be about how we work as an organization, with volunteers in 90% of congressional districts, to help enact legislation like this,” she said.

Ohio’s 10th Congressional District, which contains most of the Village of Yellow Springs, isn’t in the 90%. Lee Morgan, former head of Antioch Publishing/Creative Memories, president of the Morgan Family Foundation and erstwhile Yellow Springer, would like to see that change.

Morgan, who has been active in forming a CCL chapter in his home district in St. Cloud, Minn., has personally seen the work Sparks has done to organize volunteers. In setting up his local chapter, Morgan had weekly phone workshops with Sparks in which she taught him, and CCL activists from around the country, how best to organize for climate activism. Morgan believes Yellow Springs has a lot to learn from Sparks.

Morgan said he was frustrated by Yellow Springs’ lack of a CCL chapter.

“If there’s anywhere that should have a CCL chapter, it’s here,” he said.

On a trip to Washington, D.C. this June, Morgan met with an aide to Rep. Mike Turner, the 10th District’s Republican congressman. When Morgan asked the aide what he’d been hearing from constituents about climate change, the answer disturbed him.

“You know what he told me? ‘Not a thing,’” Morgan said. “I thought Yellow Springs was supposed to be on top of these issues.”

And what does being on top on these issues mean? To Morgan, it means cultivating the kind of bipartisan support CCL specializes in drumming up.

“We desperately need Republican support,” Morgan explained. “It is very important. We need them to work with us on addressing climate change, too. The economics and the math are with us. It’s a political problem right now, and the politics are just killing us.”

The solution to that political problem, according to Morgan, is developing broad support for these issues among constituents in their home districts.

“It’s a question of building bipartisan political will. And that’s what Elli is so good at.”

Though there is, in Yellow Springs, no shortage of passion surrounding these issues, Morgan feels there’s something missing — something Sparks can help provide Villagers: civility.

“That’s what she brings to the table,” Morgan said. “Citizens’ Climate Lobby believes in gratitude, appreciation and respect. And those are the things I try to practice when I have my CCL badge on.”

In training with Sparks, Morgan continued, it was these things she emphasized, and these things which he felt to be most helpful.

“Elli did a weekly phone call for group leaders, and she really emphasizes things CCL tries to embody. Like punctuality: start on time; end on time; don’t keep people sitting around waiting. Value people’s time. It’s a way to show them your gratitude.”

The result? A warm reception in Washington when it comes time to lobby politicians for action on the climate crisis. Morgan illustrated this by way of an anecdote:

“I’ve been sitting in meetings with congressmen in Washington, and afterwards I’d say, ‘Wow that was a rough meeting. I hope we weren’t a problem for you.’ And you know what they’d say? ‘ CCL? Oh, you guys are never a problem.’

“That’s the kind of reception we need in Washington.”

Villagers interested in learning about the CCL can attend Sparks’ lecture, free of charge. Those planning to attend are asked to register in advance at http://www.eventbrite.com/e/organizing-and-lobbying-for-the-environment-with-elli-sparks-tickets-74158797961. The talk is co-sponsored by Glen Helen, Tecumseh Land Trust and the Springfield chapter of CCL. For more information, visit the Tecumseh Land Trust Facebook page or call Krista Magaw at 767-9440.

*The writer is an Antioch College student and freelance reporter for the News.