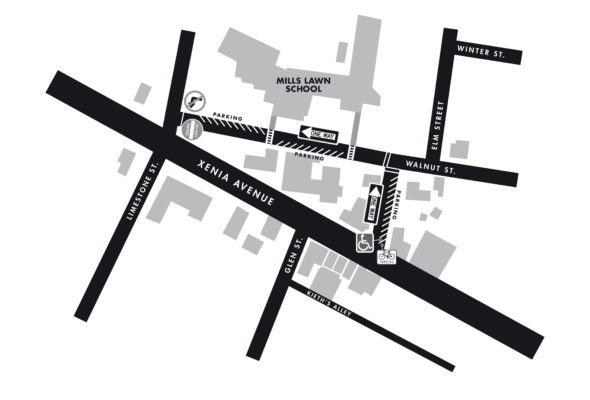 The Village will test a new traffic pattern in the area around Mills Lawn School from Oct. 21–Nov. 9. Short Street and a section of Walnut Street will be turned into one-way streets and left turns will not be allowed from Walnut Street onto Limestone Street in a trial project to address congestion and pedestrian safety concerns in the area.

From Oct. 21 through Nov. 9, the Village will test a new traffic pattern in the areas of South Walnut, Short and Limestone streets.

“I hope everyone’s open, I hope we get constructive and accurate feedback,” Housh said.

The village will solicit feedback on the project via an online survey at ww.yso.com. The survey will be available the week of Oct. 28. In the meantime, people are welcome to send comments to Council Clerk Judy Kintner at clerk@vil.yellowsprings.oh.us.

Work to re-stripe the streets and erect signs and billboards in the area started on Friday, Oct. 18.

The Village has purchased $4,200 of new equipment for the pilot project, according to Village Public Works Director Johnnie Burns this week in response to a question from the News.

Village leaders have said the goal is to improve safety during pickup and drop-off at Mills Lawn Elementary School, and to address congestion concerns in the area.

This week, Housh added that concerns over bike parking also contributed to the plan. One parking space along Short Street will be dedicated to bicycle parking during the trial.

Diagonal parking for vehicles, meanwhile, will be available on the north side of Short Street, and on both the west and east sides of South Walnut Street. The Village has claimed there will be more parking, but current diagrams show 30 vehicle spaces projected, while 36 spaces are now available on both streets.

Council members did not share their opinion on the plan this week, speaking instead about the process.

Council member Kevin Stokes said he would “withhold any final judgement” on the project until it is assessed. He also suggested that the Village consider only changing the flow of traffic during school pickup and drop-off, and asked several questions on how it will be evaluated.

“I’m wondering, where are we with a baseline? Where are we now, and how will we define how successful this experiment is?”

In response, Salmeron said that the Village will use vehicle counters, surveys of stakeholders and observation, which he said involved, “putting people on the streets observing traffic patterns before and after.”

Council member Lisa Kreeger commented that she is in favor of the pilot “even though it’s change and even though it’s inconvenient for people to accommodate.” Kreeger added that the Village should try to collaborate with business owners who may be affected.

In response to a question to Council from the News, Council Vice President Marianne MacQueen said she doesn’t have an investment in this particular plan, but is invested in safety. She also addressed the community’s response thus far.

“I am surprised there is such resistance to this plan,” she said.

From the floor, Village Council candidate Laura Curliss said that the plan may have “unintended consequences,” such as creating more traffic congestion downtown by diverting cars from Walnut Street to Xenia Avenue.

“What I think people aren’t hearing is, what are the downsides of doing this?”

Curliss also asked whether the school should address its own safety concerns.

Also from the floor, neighbor Richard Lapedes commented that the school district could consider using land at the corner of Limestone and South Walnut to improve school pickup and drop-off.

Matthew Kirk suggested an incremental approach to solving the area’s traffic problems, such as more signs and crosswalks.

“There’s gonna be a hybrid [solution],” he said. “Let the test work. Let’s see what happens.”

And Faith Morgan said from the floor that she approves of the plan.

“I think it makes a lot of sense, what you’ve done,” she said.

Housh also challenged concerns about the project’s impact on vehicles, calling it a result of the “car-centricity that’s in our minds.”

“We should not all be in cars,” Housh said, adding, “Some of that has been lost in translation, but that is what the heart of active transportation is about.”

In response to a question from the News on the budgetary impact of the project, Salmeron said that it has mostly involved an unspecified amount of staff time.

“It’s time we already have on our team,” Salmeron said. “We’re forgoing other activities to do this, but we think this is important.”

In other transportation business at Council’s Oct. 7 meeting —

Specifically, the Village is looking to repave and combine the existing sidewalk with an adjacent crumbling bike path along the south side of Dayton Street from South Stafford Street to East Enon Road, turning it into a shared-use “hike/bike” pathway.

New traffic calming measures along Dayton Street are also part of the proposal. That includes new crosswalks and “bump outs,” or extended concrete sections to shorten the distance pedestrians have to cross the street.

The Village is requesting $1,195,658 from the Federal FAST Act program, which would require a local match of $331,000, according to Salmeron at the meeting. That local money, due in 2025, could be additionally offset by grants from the Ohio Public Works Commission, Salmeron said.

Housh said that the project, if successful, could be replicated on West South College Street and, in the meantime, would help create a safe pathway along Dayton Street for local school children.

“This would get the kids up to the high school and middle school safely,” he said.

The project does not include a raised “tabletop crosswalk” across Dayton Street at Winter Street, however. Although that change was recommended in the Active Transportation Plan, recent comments from Miami Township Fire-Rescue led the Village to rethink the proposal.

According to Salmeron, MTFR Chief Colin Altman registered concern about the ability of its emergency vehicles to safety and quickly cross the raised tabletop.

In response to a question from the News, Salmeron said that the initial grant request, due this week, would not “lock the village” into the proposal.

The commission would also have one member from the Planning Commission, and Village Planning and Zoning Administrator Denise Swinger would participate as an ex-officio member, Housh said.

From the floor, Kirk said that he worried the group’s tentative makeup was too “expert heavy” and that simpler solutions to transportation problems should be sought before more complex projects.

Council will revisit the topic at a future meeting.

Other items from Council’s Oct. 7 meeting will be in next week’s News.