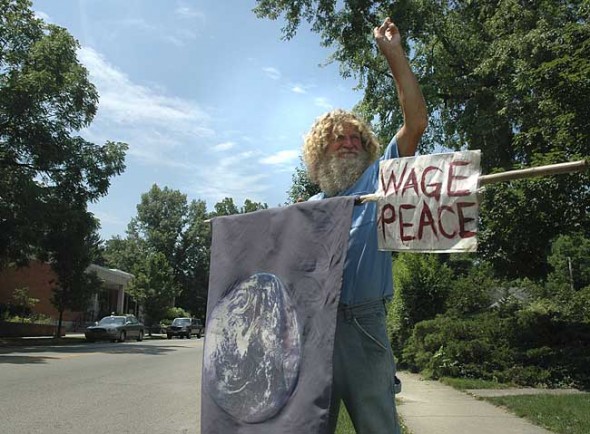 The late Terry Snider was among many protesters who stand at the corner of Xenia Avenue and Limestone Street every Saturday to oppose U.S. military action abroad. The informal group has gathered at that corner from noon to 1 p.m. since late 2002. (photo by Megan Bachman)

The 2019-20 Guide to Yellow Springs: Activism in the Village

From our small village has come a loud voice for change.

Whether protesting war or protecting trees, desegregating downtown or aiding immigrants, Yellow Springers have long led the march for social progress. We have resisted discrimination and development, advocated for women’s suffrage and nuclear disarmament and fought for LGBTQ+ and indigenous rights.

This year’s Guide presents recent articles and material from our archives to highlight the brave local activists working for a more just, fair and sustainable world. 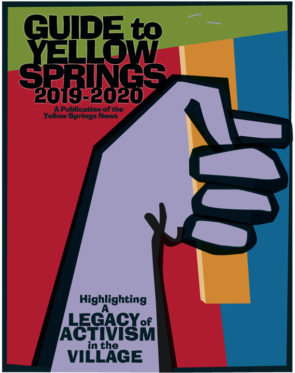 This year’s Guide to Yellow Springs cover hearkens back graphically to the 1960s era of American protest art. It recalls the iconic “fist in the air,” here holding a protest sign. (Design by Matt Minde)

Did you know that the village made national headlines during a 1964 protest to desegregate a local barbershop? That Yellow Springs could be twice its size if a plan for tract housing wasn’t stymied during a high-stakes auction? That prominent activists like Martin Luther King Jr., Cesar Chavez and W.E.B. DuBois spoke at Antioch College?

Along with stories on these rabble rousers, you’ll find a comprehensive listing of local organizations. No doubt the breadth and depth of our local groups makes for a rich, and active, local community.

But countering the status quo is only half the battle. Villagers have also established a variety of progressive policies, organizations and events right here in our community. As Buckminster Fuller is credited with saying, “You never change things by fighting the existing reality. To change something, build a new model that makes the existing model obsolete.”

Take the Village’s Human Relations Commission, whose mission since in the early 1960s has been to “promote harmony among citizens” and “eliminate prejudice and discrimination within the village.” Another homegrown initiative involves greening the Village’s electric portfolio to stem pollution and climate change; it’s now 83% renewables. And, of course, there’s Antioch’s intentional founding in 1850 as a college for men and women of any creed, and, a decade later, any race.

But make no mistake, Yellow Springs is no utopia. The realities of white supremacy, misogyny and settler colonialism — to name just a few — don’t stop at our borders; in fact they are embedded in our town. Historically, and still today, Yellow Springs has struggled to live up to the values it espouses. We sometimes rest on our laurels, and don’t see the work left to do. What sets apart our community, I think, is not its purity, but its commitment to continue striving for a better world, even if we won’t see the results in our lifetime.

This guide is a sampling of articles across a range of issues; it’s in no way comprehensive. But I hope you find it as inspiring as I have. To me, the activism of many villagers reflects the sentiment from Australian indigenous activist Lilla Watson, who said, “If you are coming to help me, you are wasting your time. But if you are coming because your liberation is bound up with mine, then let us work together.”