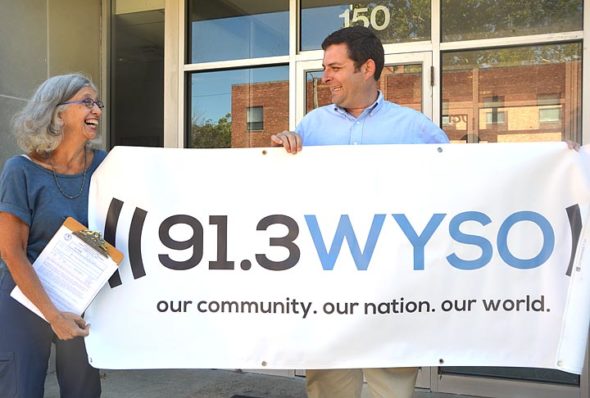 On Aug. 30, the Federal Communications Commission, or FCC, gave final approval for the transfer of the station’s broadcast license from longtime owner Antioch College to Miami Valley Public Media, Inc., a newly created nonprofit governed by a seven-member community board.

The transfer completed an amicable separation between Antioch and WYSO that began 18 months ago and was publicly announced by college and station leaders on Jan. 30.

“This is certainly an outcome to be celebrated — a win, win, win: for the station, college and community,” Antioch College President Tom Manley said of the FCC approval in a recent statement.

In less than a year, WYSO raised $3.5 million, including $2 million from lead donor Charles D. Berry of Dayton, to purchase its broadcast license from the college.

Miami Valley Public Media, or MVPM, took fiscal responsibility for the station on April 1, and WYSO staff began managing day-to-day finances without Antioch as a financial backstop. Until Aug. 30, the station leased its operating license from the college.

Now fully independent, WYSO announced a management change this week. General Manager Neenah Ellis is stepping out of the top spot, which she has held since 2009, to launch a new Center for Community Voices at the station. The center will build on and expand WYSO’s existing training programs for community radio producers.

Director of Development Luke Dennis, who has been with the station in that role since 2012, is now the station’s general manager.

The pair stepped into their new positions July 8, with a gradual transition through the summer, according to Dennis.

In an interview this week, Ellis expressed enthusiasm for her new role, and confidence in Dennis’ leadership.

“Luke’s just going to be awesome,” she said.

“It was important to me that we’re not hiring a manager from someplace else,” she added.

Ellis, a longtime NPR producer, said she is looking forward to expanding the radio journalism training programs for community members that she initiated at the station in 2010. And she hopes to find time to get back to producing radio stories of her own.

“I really want to make radio stories again. I’m eager to get back to that,” she said.

Dennis, who came to the station seven years ago after serving as executive director of arts organization the Muse Machine in Dayton, among other positions, said he was ready to lead the organization in its next phase.

“I love public radio, and I love this station,” he said.

While serving a potential audience of up to a million listeners across the Miami Valley and down the I-75 corridor toward Cincinnati, WYSO is — and plans to remain — a Yellow Springs institution, according to Dennis.

“WYSO world headquarters will stay in Yellow Springs,” he affirmed.

The station recently signed a four-year lease with Antioch College for its current office and studio space in the Charles F. Kettering building on East South College Street.

The station may eventually open a satellite location in Dayton, but it has no plans to relocate away from Yellow Springs, according to Dennis.

On the near horizon are plans to expand WYSO’s newsroom by hiring a news director and a part-time daily spot news producer, two new positions. In addition, the station is advertising to fill its Morning Edition host/reporter position currently occupied by April Laissle, who is leaving the station for another public radio opportunity out of the area.

Dennis sees the new positions as key to “strengthening and expanding” the station’s local news coverage.

“We don’t want to replicate or duplicate Dayton Daily News,” Dennis said. “But there’s an opportunity to add to the local news environment.”

Specifically, the station, which offers a hybrid of news and music, seeks to expand its breaking news coverage and in-depth enterprise reporting. Increased areas of focus could include health reporting, economic development and Wright-Patterson Air Force Base, he said.

WYSO also seeks to contribute more stories to other NPR affiliates in Ohio, as well as collaborate with Ohio public media outlets on statewide reporting, he said.

The station currently employs 12 full-time employees. According to Dennis, station staff have reacted positively to the changes.

“The mood in the office is really excited. There’s lots of optimism, and the staff feels safe,” he said.

Another area of expansion is the launch of the Center for Community Voices, headed by Ellis.

Fundraising for the new center begins next week, with the goal of staffing the center — which will be located at WYSO’s Yellow Springs offices — by Jan. 1, according to Ellis. A pilot training program for the staff of a small NPR station in Indiana is launching this fall, she added.

The radio journalism training offered by the center will be similar to the training currently provided by the station’s Community Voices program, consisting of both short-term and longer-term training in technical and editorial aspects of radio production.

Since Community Voices started in 2010, WYSO has trained more than 200 people from the community, and works actively with 20 to 30 community producers, according to Ellis.

Dennis is among those who graduated from the first Community Voices class in 2011.

The independent producers that WYSO has trained contribute significantly to the station’s breadth and depth of programming, according to Ellis.

“It expands our capacity,” she said. “Local programming has taken off, thanks to our community producers.”

Yellow Springs residents Basim Blunt and Jocelyn Robinson are among the community producers who have enriched the station’s programming and built new connections and trust between WYSO and the communities it serves, she said.

Community Voices training is fee-based (with scholarships available), and training through the new center will likewise be offered at a cost to participants. The center will be a revenue-generating aspect of WYSO’s business, according to Ellis.

The station’s financial position is solid, Dennis said last week. The station has not been subsidized by Antioch in recent years, but instead was a net revenue gain for the college.

“Our finances have been very strong — we can certainly stand alone,” he said.

The station currently has a $2 million budget, with newly created endowment and rainy day funds. A benefit performance by comedian Dave Chappelle in June raised $250,000 for a transition fund that has smoothed WYSO’s separation from the college.

That separation was completed in a spirit of collaboration and support, according to college and station leaders.

“The college took a respectful, collaborative approach, supporting us along the way,” Dennis said.

Splits between colleges and their NPR affiliates do not always go so smoothly.

About two-thirds of the nation’s more than 1,000 public radio stations are owned by colleges and universities, according to the website of the Corporation for Public Broadcasting, or CPB. But recently, responding to declining enrollment and budget pressures, some college and university owners have divested themselves of their public media stations. In some cases, broadcast licenses have been sold to the highest bidder to bring in needed cash, according to a March 2019 article on the CPB website.

That can put a license out of reach to nonprofit community media groups, the article noted.

But in the case of Antioch and WYSO, the transition was undertaken for mutual benefit, college and station leaders said.

“As I see it, Antioch’s socially progressive educational philosophy and values guided the trustees to ensure WYSO was secured as an independent, community-owned resource,” President Manley wrote in a recent Op-Ed in the Dayton Daily News.

“It’s rich with possibility,” he said of the relationship. “If anything, there’s more opportunity now that we’re two separate entities focused on our own missions.”