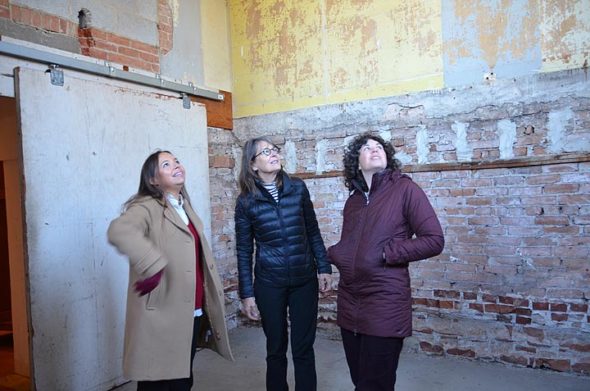 The first phase of a stabilization project that’s bringing heat to Antioch Hall, among other repairs, is due to be completed by year-end. This phase of the project is funded by the Yellow Springs Community Foundation. The YSCF’s Jeannamarie Cox, center, was joined by Antioch College staff members Jennifer Knickerbocker, left, and Christine Reedy on a recent walk through the building. (Photo by Audrey Hackett)

A new vision for Antioch Hall

If all goes as planned, Antioch Hall will have heat by the end of the year.

The return of warmth to the iconic structure at Antioch’s heart, commonly known as Main Building, is the result of a unique collaboration between the college and village. Last December, after nearly a year of discussion with college leaders, the Yellow Springs Community Foundation, or YSCF, funded an endowment for the purpose of stabilizing Antioch Hall, and made a $500,000 directed grant to tackle projects of immediate need. The most pressing, based on an expert assessment? Installing a heating system in a building formerly powered by the college’s steam plant, which was shut down when the college closed.

“Really, this is about adding heat,” said YSCF Executive Director Jeannamarie Cox last week, leading this reporter on a tour of Antioch Hall, along with two members of Antioch staff.

Other aspects of this phase of the project, due to be completed at the end of 2019, include asbestos abatement, replacing ceiling tiles and installing and rewiring lights at Kelly Hall, the performance space located in the building.

The project is being led by construction manager Earl Reeder Associates of Dayton, with a variety of area contractors experienced in restoration and stabilization work, according to Cox.

Restoring heat will mitigate the building’s freeze/thaw cycles and reduce its humidity, both of which are essential elements for stabilizing the structure for future use, according to Cox.

And that future use is part of what makes the project exciting, she added. While the current effort is just phase one of a multi-faceted, long-term and more expensive undertaking, the hope is to eventually bring the building back for both college and community occupancy.

“The building will continue to be used as a college facility, but it will also offer community space where appropriate,” Cox said.

The $500,000 grant for phase one of Antioch Hall’s stabilization is by far the largest the YSCF has ever made, according to Cox, who is serving as a project coordinator, reporting to both the foundation and the college.

Grants in the amount of $5,000 are more typical for YSCF, she added.

The $500,000 grant was preceded by a smaller $30,000 grant for evaluating the building’s needs. That evaluation set the priorities and scope for the current phase, according to Cox.

Among those involved in the project is villager Malte von Matthiessen, a 1966 Antioch graduate who chairs the facilities committee of the college’s Board of Trustees. In an interview this week, von Matthiessen sketched out an expansive vision for the building’s future.

“This building is not just a proprietary asset of the college. The community has a huge vested interest in preserving this building,” he said.

The end vision is a mixed-use space to include offices for local nonprofits, perhaps a local history museum and — when Kelly Hall is refurbished for use — a performance space accessible to the community. 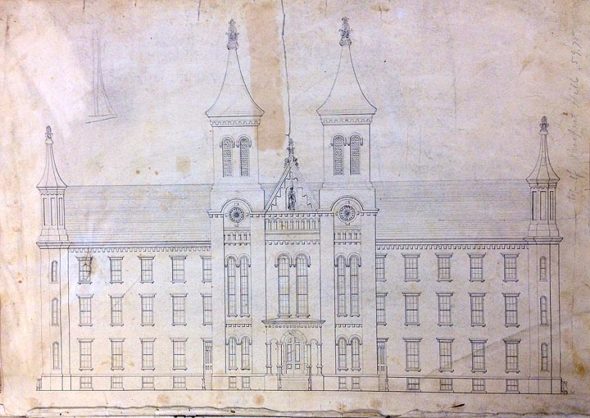 History of a hall

Constructed in 1852–53 by Alpheus Marshall Merrifield, Antioch Hall was an icon from the start. One of the models for the building was the Smithsonian’s red-brick “castle” in Washington, D.C. While that structure wasn’t completed until 1855, many architects of the day were inspired by circulating models of the building, according to Antioch archivist Scott Sanders.

“It took architects by storm,” he said.

On the National Register of Historic Places since 1975, Antioch Hall most closely resembles a school building in Massachusetts, Davis Hall at the Worcester Academy. Merrifield’s design of the Antioch structure combines elements of Romanesque, Greek Revival and Gothic architectural styles.

The “reach for the stars” towers are pure Gothic, and define the building’s lofty profile, according to Sanders.

Antioch Hall cost $120,000 in the money of the day to construct, and its laborers were paid up to 20 cents per hour, according to a 1938 article on its history provided by Sanders.

For most of Antioch’s history, the building housed the college president’s office, as well as other administrative offices, classrooms, conference spaces and more.

Von Matthiessen remembers Antioch Hall fondly as the center of student life during his time on campus in the early 1960s.

“It was the center of campus. Everything happened there,” he said.

Antioch Hall underwent a massive renovation from 1958 to 1962. And it was a good thing that it did, according to Cox.

“That renovation saved it for future use,” she said, adding that the builders used “the best materials of the day” for the project.

The mid-century renovation inset a concrete structure inside the original construction, stabilizing the building and insulating Antioch Hall’s interior against the worst effects of weather and degradation. The project also created four floors where there had previously been three.

A controversial aspect of the renovation at the time was the decision to relocate the entrance from the east side to the west side, where it is today. Antioch Hall once faced the Little Miami Railroad, giving train travelers a taste of the college’s grandeur, according to Sanders.

“They could see this magnificent building,” he said.

To those involved in the present-day project, the magnificence of Antioch Hall remains, despite the weathering the building has endured.

Cox, who has spent “nearly every day of the last 18 months” on site, coordinating first a smaller assessment project and then the current stabilization project, says the building still excites her.

“It’s picturesque, it’s iconic, not just for the college, but for all of southwestern Ohio,” she said.

Antioch Hall has been shuttered since Antioch University closed the college in June 2008. Formerly connected to the college’s power plant, an unheated Antioch Hall experienced significant flooding in Feb. 2009, when its attic sprinkler system broke. The incident sparked intense local concern about the university’s lack of maintenance of campus buildings. Alumni and villagers helped push for an environmental cleanup effort 10 years ago to dry out Antioch Hall and South Hall, which also experienced flooding after the closure.

Since then, Antioch Hall has been unoccupied, though used occasionally as a space for events. For example, the Miami Township Fire-Rescue’s annual 9/11 stair climb takes place there. Over the past 10 years, the college has undertaken some maintenance to the roof, attic and elevators, according to college spokesperson Christine Reedy this week.

But a major effort lies ahead. And the $500,000 invested by the YSCF is just the start.

As the heat comes on this fall, the YSCF will continue to work with the college to determine the priorities, costs and timeline for phase two of the building’s stabilization — as well as potential outside funding sources for this next phase, according to Cox.

The YSCF is helping to set up the next phase for other funders to step in, she said.

According to Antioch fundraising officer Jennifer Knickerbocker on last week’s tour, the college is exploring a range of funding options.

“Our primary vision is for a center for collaboration between the community and college,” she said. “This is a model for our future, and I think it will resonate with lots of people.”

Major items in phase two include refurbishing the sprinkler system in the attic, tuckpointing the brick on the building’s exterior, securing all exterior doors and installing gutters and downspouts to address drainage issues.

“None of this is the sexy stuff,” Cox said, with a laugh.

But all of these stabilization steps must be taken before a true renovation project can begin, she added.

Asked about the total project cost, von Matthiessen said this week that an architectural study commissioned by former President Mark Roosevelt several years ago estimated that $20 million would be needed to bring Antioch Hall “back online.”

But von Matthiessen thinks it can be done more cost-efficiently.

Other steps down the road are the restoration of Kelly Hall, which von Matthiessen believes could serve in the future as a performing arts space for the community.

The 674-seat auditorium is the “perfect size” to complement existing performance halls in the region, according to Knickerbocker last week.

“It makes our entire Miami Valley drool,” she said.

Cox noted that Kelly Hall began life as a chapel, became a site for basketball tournaments, then later was converted into a performance venue. The space is ripe for further transformation, she said.

“There are so many wishes and dreams around this,” she noted.

Antioch College recently celebrated 10 years since an alumni-led effort bought the college independence from the university, the prelude to relaunching the new Antioch. Alumni, villagers and college staff and students gathered on campus to mark the milestone and brainstorm the future.

Cox addressed the audience about the building’s stabilization. Standing on the interior terrazzo tile steps that lead up to Kelly Hall past arched west-facing windows, Cox recalled the moments after a new air exchange system was installed and went online.

“Within minutes, the building could breathe again,” she said.