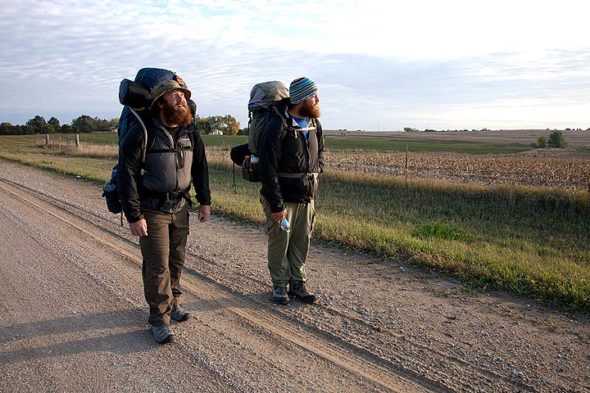 Veterans Tom Voss, left, and Anthony Anderson began trekking at sunrise in Iowa on a cross-country journey they undertook while struggling with mental illness after returning from war. “Almost Sunrise,” a film on their experiences and the issue of “moral injury” will be shown at the Little Art on Saturday, Nov. 9, from 12:30 to 3 p.m. It is free and open to the public. (Still Image from Film)tle

A documentary following the journey of two Iraq veterans as they walk over 2,000 miles across the western United States aims to shed light on the challenges soldiers face when they return to civilian life.

The National Alliance on Mental Illness Clark, Greene and Madison Counties, or NAMI CGM, will be screening “Almost Sunrise,” a film that explores the effects of mental illness and moral injury on veterans, on Saturday, Nov. 9. The free screening will take place from 12:30 to 3 p.m. at the Little Art Theatre.

“It made a huge impact on us and we said, ‘We need to bring this back to our community,’” villager Kathryn Hitchcock, the director of outreach and development at NAMI CGM, said of the film.

The Emmy-nominated film follows Tom Boss and Anthony Anderson as they search for healing after years of severe depression due to their experiences during war. Part of their healing includes walking from Wisconsin to California. The documentary, directed by Michael Collins, premiered in 2016 and was co-produced with Independent Television Service and POV, a documentary program from PBS.

Hitchcock, who has worked with the organization for five years, hopes to fill the theater on Saturday. It’s important for the general public to understand how moral injury can affect soldiers and how it is different from post-traumatic stress disorder, she added.

“If you come back feeling as if you did something that was wrong or you didn’t do something that you knew was right for you to do, then PTSD treatment doesn’t help that,” Hitchcock said.

Moral injury is different from PTSD in that it’s an injury of the conscience, whereas PTSD affects the way your brain works due to trauma, according to Hitchcock. People may develop PTSD in response to traumatic events, which includes combat, according to the National Institute of Mental Health, or NIH.

Moral injury occurs after an event that transgresses one’s deeply held beliefs and ethical expectations, whether they be spiritual or cultural in nature, according to the U.S. Department of Veteran’s Affairs.

According to Hitchcock, it’s difficult to identify how moral injury impacts veterans and service members in the local area because of a lack of awareness about the issue. Moral injury can cause shame and remorse in those who have it, and Hitchcock believes it could play a role in veteran suicides.

“There’s no research about that, but there’s an international discussion going on about what role it might play,” she said.

In addition, 7–8% of the U.S. population will experience PTSD at some point in their lives, according to the NIH. The NIH further estimates between 11–20% of veterans who served in Operation Iraqi Freedom and Operation Enduring Freedom experience PTSD in a given year.

“Moral injury requires that a soldier forgive themselves, because it has to do with conscience,” Hitchcock said. “It has to do with feeling like you did something wrong that was against what you’ve been taught in Sunday school, what your mom and dad taught you, what the culture asks of you in terms of a code of behavior.”

Part of addressing the issue of moral injury involves treatment providers and psychiatric professionals becoming familiar with it, Hitchcock added.

Hitchcock hopes people can leave the theater having gained an understanding of moral injury and how it affects people we know and love, and the realization that recovery looks different for each individual.

• NAMI CGM runs two drop-in centers, the Lighthouse in Greene County and the Vernon Center in Clark County. The centers offer a space for adults with mental illness to interact and socialize. The organization also offers support groups and educational classes for individuals with mental illness and their families. For more information, visit http://www.namicgm.org.

• Greene County has a Veterans Service Office located in Xenia, which helps with Veterans Affairs claims and financial assistance, in addition to other services. They can be reached at 937-562-6020.

• Hols Fischer, a troop and family assistance center specialist supporting the Ohio National Guard can be reached at 614-949-7990, https://homefront.ohio.gov/RISFAC/Region4.aspx.

•For more information on the documentary, visit sunrisedocumentary.com.

* Nora Jaara is a freelance writer who lives in Fairborn. She can be reached at norajaara@protonmail.com.