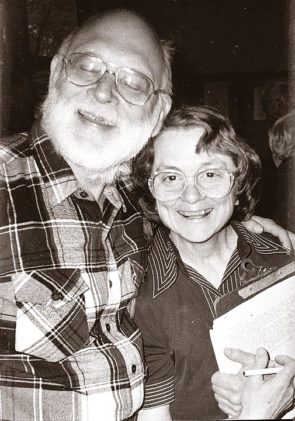 Peg Champney with her husband, Ken.

Margaret Louise Palmer Champney, beloved resident of Yellow Springs for nearly 70 years, took her last, peaceful breath on Nov. 5, 2019, at the Friends Care Center, with family by her side and Bach’s B minor mass playing on the CD player. She had been living independently at home in good health until just a few weeks before her death, at age 87.

Peggy was born in 1932 in West Chester, Pa., into a Quaker family spanning many generations. Her father worked at a landscape nursery where the family also lived, and Peggy and her two older brothers were able to run wild throughout the entire grounds. Very much the darling of the family, “Peggy Lou” loved school and was bumped up to second grade after just one week in first grade. She attended silent worship at the local Concord Friends Meeting from a young age and began teaching Sunday School at age 12. Quakerism and her family’s strong pacifist values remained a lifelong focus. Peggy was also drawn to music from a young age. A peak experience of her childhood was being able to save up enough money to buy her own violin, after which she practiced diligently every day even without having a teacher to guide her. This deep love and appreciation for music was an important theme throughout her life.

After finishing her high school years at George School, a Quaker boarding school, where she excelled academically but felt homesick and socially awkward, Peggy moved to Yellow Springs to attend Antioch College. Here, she felt truly at home and flourished within her newfound community, enjoying her studies, with a focus on child psychology, as well as Antioch’s co-op work program in early childhood education. At Antioch, Peggy was introduced to her future husband Kenneth Hilbert Champney by his mother, Ava English, a music teacher at the college. Ken had just moved back to his hometown of Yellow Springs in order to save the faltering Yellow Springs News, which he went on to print, publish and edit over the course of his life. Peggy’s and Ken’s romance flourished quickly, fueled by shared idealism and a love of music. They were married in 1951. Pacifism was a driving force in the life of the young couple, leading to Ken’s refusal to register for the draft and subsequent 20-month prison sentence. Peggy dropped out of Antioch after just one year in order to keep the YS News afloat during Ken’s imprisonment. She did this nearly singlehandedly, producing the paper every week and operating the complex machinery required for printing. She had to get up early in the morning and bike to the YS News offices in the dark, which one day led to her getting stopped by the police, who mistook her for a “runaway teenager.” Despite the hardships, Peggy experienced these early days of her marriage as a very exciting time, living up to her idealistic values as a team with Ken and warmly supported by the Yellow Springs community.

Peggy and Ken soon moved to the intentional community “The Vale,” just outside of Yellow Springs, where they led a consciously simple life and grew as much of their own food as possible. Both felt strongly about avoiding paying income tax, since such a large part of it went to the military, and were always very careful to keep their income low enough and charitable contributions high enough to stay under the taxable limit. Together with her neighbor Jane Morgan, Peggy founded the Vale School for local children up to 3rd grade and also taught Sunday School to generations of Quaker youth. In addition, she continued to work at the YS News in many roles for her entire adult life.

Peggy had always felt called to have children and was overjoyed to give birth to her first son Carl in 1953. In the following years, Peggy and Ken welcomed five children and multiple foster children into their lives. As a mother, and later grandmother, Peggy had a deeply respectful and accepting approach toward her children, empathetically but non-invasively supporting them through their various life challenges. All of the children were heavily involved in YS News and garden work, and music was a big part of the family culture. Peggy herself played viola in various chamber music and orchestral settings and sang in the MadriGals. Singing with the Yellow Springs Community Chorus remained one of her most treasured weekly activities until the end of her life.

In 1980, her children grown up, Peggy devoted herself to the next big project of her life: co-founding a Quaker music camp, “Friends Music Camp,” with her friend Jean Putnam. In FMC, Peggy was able to integrate her commitment to Quaker youth education with her love of music. Her musician children Wendy and Heidi agreed to teach for the inaugural summer and returned many times as the camp flourished. In addition, nearly all of Peggy’s grandchildren came to FMC as campers over the years. The unique atmosphere at FMC, fueled by music and intentional community, led to life-changing experiences for countless young people. Many teenagers who felt they couldn’t be their authentic selves during the school year felt accepted and at home at FMC.

Peggy’s beloved husband, Ken, passed away in 2011. Following his death, she lived alone until her granddaughter, Suzie, moved in with her in the summer of 2019. Peggy maintained an intensive gardening schedule, took daily walks and actively cultivated community connections in the Vale, Quaker meeting, Community Chorus, and with her family, who came together for “Champney Christmas” every year. In 2019, Peggy was able to attend the weddings of two of her grandchildren, Chiara in Switzerland and Max in Vermont.

Peggy is survived by her brothers, Vail and Clarkson Palmer; her children, Carl Champney (Charlene Prestopino), of Yellow Springs, Rebecca (Thomas) Hodgkins, of Show Low, Ariz., Wendy (Matthias) Enderle, of Zurich, Switzerland, Heidi Champney, of Starksboro, Vt., and Eric Thomas, of Columbus, Ohio; and her six grandchildren, Max, Suzie, Jeff, Chiara, Danielle and Daria. Any contributions in her memory may be made to the Friends Music Camp Scholarship Fund.

A memorial service is planned for Saturday, Dec. 28, beginning at 3 p.m., in Westminster Hall at First Presbyterian Church of Yellow Springs.