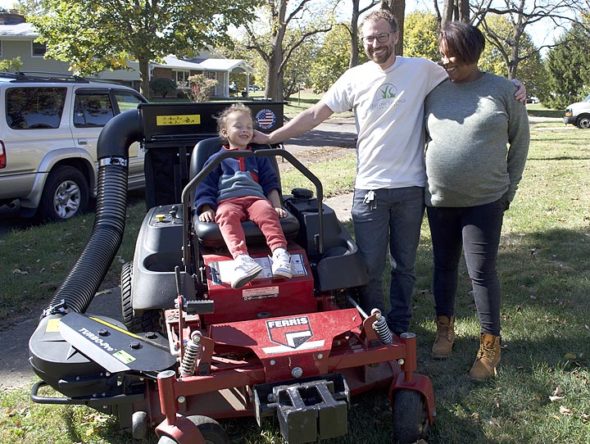 Ben Miller launched Yellow Springs Lawn Care in June with the support of his family, fellow longtime villager Natasha Eyorokon-Miller and their 4-year-old son, Kai. With mowing season on the wane, Miller is increasingly focusing on clearing fallen leaves from local yards. (Photo by Nora Jaara)

As a former aircraft mechanic in the Air Force, Ben Miller has seen a lot of places, but one has always had his heart.

Now back in his hometown, Miller has launched a new business, Yellow Springs Lawn Care, that he sees as an expression of love for the village.

“I always envisioned moving back to Yellow Springs,” Miller said. “I’m certainly glad that I did.”

Miller, 35, graduated from Yellow Springs High School in 2002 and left soon after to join the Air Force. He returned in 2007, and in June opened the new local business.

Miller said he does not use chemical pesticides and fertilizers, and he supports the use of organic alternatives. He is working to obtain a certification in organic lawn care.

“My goal is to help people have nice properties and keep the bees alive,” Miller said.

Miller, who operates the company out of his home on Miami Drive, started the business after realizing residents would benefit from more local options for lawn care. He had been taking care of his neighbor’s lawn after her husband passed away, in addition to his own. After broken equipment forced him to use a push mower, he realized the task was too time consuming, but he had a hard time finding someone to provide the services he needed.

“I’ve always been an entrepreneur at heart and a business person at heart, so it was kind of a natural thing to do,” Miller said.

Natasha Eyorokon-Miller said her husband had his sights set on starting the business for years, but she felt nervous about his new endeavor at first.

“It’s always different when your partner wants to go through this big career shift,” Eyorokon-Miller said. “But I was also sort of thrilled that he was taking a chance because he had been talking about it for so long.”

Eyorokon-Miller added that Yellow Springs was the perfect community for that endeavor because it was such a supportive one, and it was only a matter of time before word about the business spread.

As an aircraft mechanic in the Air Force, Miller served as a crew chief on C-130 and C-17 airplanes. He also served as a laboratory group leader at a chemical lab and invested in and helped manage multifamily real estate.

The process of establishing the business and filling out the paperwork was easy enough for Miller. The challenge, he said, is in getting customers. While most of his customers are in the Fairborn and Beavercreek areas, he hopes next year will bring him more local customers. He would like to grow his roster to 50 customers in the Yellow Springs area.

Additionally, Miller hopes to hire a team in the next year, ideally of three people. He aims to hire other employees, such as an accountant and bookkeeper, when the business expands more. In the long term, he also plans on having an office in the area and a satellite office outside of Yellow Springs.

“My vision for this company in the future would be that it’s a source of employment because the town is kind of low on good jobs,” Miller said.

Miller said he tries to set his firm apart by keeping open lines of communication and updating clients via text and email, as well as approaching each lawn like it was his own.

The way a house and its lawn looks can influence its perceived value, particularly from the perspective of people looking to buy, according to Miller.

Miller said the amount of care needed varies by season. He recommended receiving lawn care every seven to 10 days in the spring and summer. Lawns need care less frequently in the fall, unless they have a thick layer of leaves that need to be mulched.

Miller has additionally committed to giving 5% of his profits to local charities, such as the Yellow Springs Community Foundation and YSSI Recreational Youth Soccer. Part of giving back is because of what the town has given him.

“I love this community, and I’ve gotten a lot from the community,” Miller said.

His friends and much of Miller’s family live in Yellow Springs, and it’s where he met his wife, who supports his desire to give back to the community. Miller and his wife met in high school and have a 4-year-old son, Kai. They are expecting their second child this month.

“It’s just given me so much, and the sense of community in this town is like nowhere else I’ve ever lived,” Miller said.

*Nora Jaara is a freelance writer who lives in Fairborn. She can be reached at norajaara@protonmail.com.