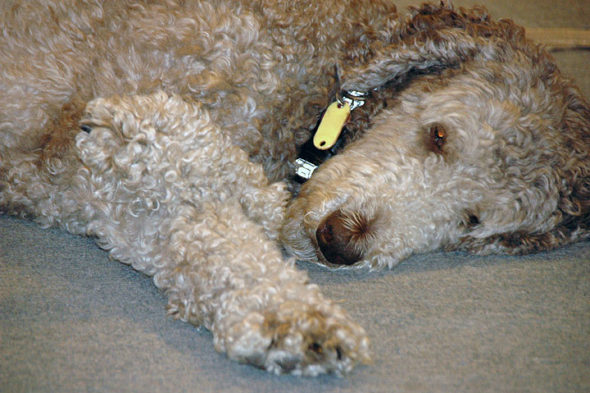 The voice of the dog. Simple, straightforward. And then, like a child who speaks an uncanny truth, soulful.

Poems that take the point of view of an object or person are called persona or mask poems. Making these poems involves empathy, imagination, projection. And maybe something else: something like a true affinity with the “not-me” object or person. When we write as someone else, aren’t we really writing from the “someone else” who resides inside us?

This month’s poems — we’re printing two short poems — are from Artie Isaac, a new villager and lifelong dog lover. When I spoke with Artie earlier this fall, he said he had “always preferred dogs to humans.” Not that he dislikes humans. “It’s just that I’ll always greet the dog first,” he said.

That, um, bone-deep affinity explains both Artie’s impetus to write a book of dog poems and the delightful results. Written at the Emporium and self-published last June, “Throw Me a Bone” is a book of poems for dogs — yes, for dogs. Most are written in the voice of the dog. And many explain dog-world to human-world. So they’re for us dense humans, too.

How far apart are dogs and humans? Many of Artie’s poems prompt that reflection. Here are two I especially like:

Does “Call Me By My Name” break your heart a little? It does mine. Can we ever know a dog’s name? Graciously, she assents to be called “Margo,” or “DogDog.” What other choice does she have? But her real name, ah, only the other dogs know that. (It’s “Clark!”) The names in the poem are monikers of love, of course. So the heartbreak is: in the very act of loving a dog, we misname her — we get her all wrong! Can we or she bridge the distance?

Animals are “other nations, caught with ourselves in the net of life and time,” the naturalist Henry Beston wrote. I like this observation. It respects the differences between animals of the human and nonhuman varieties. And it asserts the common field. Animals and we live in different worlds — in the one world. Sometimes, distance is as near as breath to breath.

That’s the situation of “Sleeping Breath.” Two animals breathe in the dark. One hears the other. Which is speaking?

“The one who’s awake is saying it,” Artie replied when I asked him this question. Dog and human take turns breathing, listening. With sleep and breath and dark and the absence of words, their kinship is palpable and absolute.

“We take turns / sleeping breath.” Do you hear a slight torque or hitch in that phrasing? It enters my ear a little strangely, and so — in the way of poetry — perfectly. Is there a deeper comfort than the sleeping breath of two? Is there a nearer nearness?

“First Lines,” the News’ own poetry column, has been publishing monthly for a year! Thanks to all who have submitted poems for consideration. It’s been a pleasure and honor to read and present your work. As poetry editor, I encourage local poets to submit to the News in the new year. Please email original, previously unpublished poems of no more than 20 lines to ahackett@ysnews.com. Thank you!

*This column originally appeared in the Nov. 28 issue of the News. To read other First Lines poetry columns, visit the archive page here.

One Response to “First Lines — Poetry of the sleeping breath”