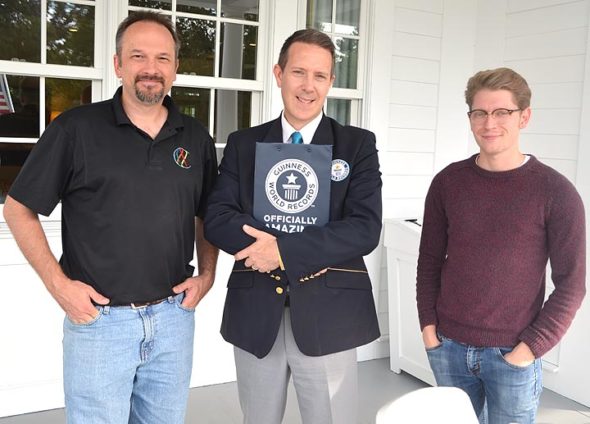 He’s awarded records for the dog with the longest tongue, the tallest man living and the largest gathering of people dressed as cows.

And this fall, Guinness World Records adjudicator Philip Robertson came to town to meet with a local man who had just attempted his own record.

Yellow Springs resident Jordan Gray  was out to set the Guinness World Records title for the largest augmented reality scavenger hunt in one week — the first of its kind.

Gray, a software developer, had designed the hunt for a new social media platform he is building for a client.

During the hunt, players went to designated places and followed clues, using their smartphone camera view to see images super-imported on real-life locations. Players tried to collect all 15 augmented reality objects at one or more of the 50 U.S. locations — one in each state.

In the end, the hunt involved less than the 7,500 people required to set the record, although Gray’s client would not disclose the final number of participants.

On the last day of the week-long hunt in September, Gray met with Robertson in the lobby of the Mills Park Hotel to review the experience.

Downplaying the attempt, Gray said it was more of “a technical challenge to put together the functional components” for the new platform.

Robertson, however, said he thought Gray was being modest.

“It is fairly complex — I think you’re understating what you’ve done,” Robertson said. “It was a huge undertaking.”

“It was a successful failure,” Gray later added. “We learned a lot.”

Only one in six Guinness World Records attempts are successful, according to Robertson. The company receives between 60,000–75,000 applications each year, approving 10,000–12,000 of them.

But the hunt helped Gray further develop the geo-location based social media platform, ARknet, which has 3,000 users worldwide. Gray, the founder and CIO of Honeycomb Archive, is working on the product for Arizona-based Tautachrome Inc.

“The Guinness World Records project was instrumental in moving us towards area sensing,” he said. Area sensing involves signaling the user’s device when they enter a specific area.

Because it uses augmented reality to help people navigate physical environments, ARknet might someday be particularly beneficial as an assistive technology for older people or those with a disability, especially when combined with augmented reality eyewear, Gray added.

“This is building the bones of an artificial intelligence-assisting way-finding technology,” Gray explained.

According to Merriam-Webster, augmented reality is defined as “an enhanced version of reality created by the use of technology to overlay digital information on an image of something being viewed through a device,” and differs from virtual reality, the creation of an entirely artificial environment.

Robertson said that a “tech proof of concept” is one prime reason that people or groups pursue a Guinness Record. Other times, it is “to bring attention to someone or something.”

For instance, on a recent visit to Ohio, Robertson gave the world record for largest number of people simultaneously applying sunscreen (681), at Cedar Point in Sandusky, an event that raised funds  for the American Cancer Society.

Not too long ago, Robertson was the U.S.’s sole adjudicator. Based in New York, he now covers the entire U.S. with a team of 14, and travels frequently.

Robertson came to Yellow Springs from Dallas, Texas, where he had just awarded the record for the largest illuminated indoor advertising sign (2,040 square feet).  And he was soon off to Hot Springs, Ark., to judge an attempt at the largest parade of Indian-brand motorcycles (it was successful, with 651 riders).

While in the village, Robertson met with Gray and his colleague, Yellow Springs native Evan Pitstick, to go over the process. Robertson had been working with them since July.

In his role of adjudicator, Robertson cannot help, but sets and clarifies the rules of the game, he explained.

Meanwhile, every category is like a different sport, he added.

In some cases, Robertson doesn’t just measure, but actually sets the benchmark.  In the case of the augmented reality scavenger hunt, he arrived at 7,500 participants by looking at the largest in-person scavenger hunt, which took place in Ottawa, Canada, in 2017 with 2,732 people.

“We needed to have something compatible,” he said.

The hunt also had to have prizes and a winner, Robertson said.

He added he was pleased with the winner, and the performance of the application, which after the first day worked “flawlessly.”

But one rule may have hindered the platform’s ability to gain a large number of participants: they were limited to only a few weeks of advertising for the event, Gray explained. Combined with such a small user base, the hunt was not likely to succeed. Those rules are also critical to creating an equal playing field, according to Robertson.

Asked whether just about anything can be a “record,” Robertson clarified the basic test.

“It has to be repeatable by someone else anywhere in the world — and quantifiable,” he said.

Augmented reality is a relatively new category for Guinness World Records, and one that’s still finding its feet, Robertson explained.

Others in the category include the largest object created by augmented reality, a 347-foot-tall building in Brazil in 2010, and the most selfies taken with augmented reality images in eight hours, in Mexico City in 2015 (4,778).

With the addition of such categories, Guinness World Records is continuing to evolve from its 1950s beginnings.

As that origin story goes, Sir Hugh Beaver, the managing director of the Guinness Brewery, was on a hunting trip in Ireland. He missed his shot at a bird, then asserted it was Europe’s fastest game bird. That led to a heated argument with others in his party over the veracity of that claim.

Later, Beaver realized that there was no reference to settle the matter, and set out to create a book, and later a company, that could put to rest such arguments, which often arise after a few pints.

Robertson clarified the connection between the beer and its record book.

“People drink Guinness and have arguments,” he said.

Growing up in Britain, Robertson was fascinated by the book, which has been published annually since 1964, and today he is grateful to be a part of the company.

“It gave me a sense of wonder and imagination as a kid,” he said. “Your brain starts expanding and you start thinking that there’s something bigger than you.”

As for the fastest game bird, Robertson said that debate can’t be definitely settled, since birds don’t fly in a straight line.

Gray, however, is hoping to try for the record again next year. He’ll continue to do so from his home office in Yellow Springs and another small office he maintains at MVECA on East Enon Road.

An occupational therapist by training, Gray is hopeful that augmented reality will “boost [a user’s] awareness” of their environment, rather than create another “layer of distraction.”

“We should always be afraid of more distractions,” Gray said. “This, however, could be a magnifier of what your intention is — not an interruption.”

One Response to “Guinness record a virtual triumph”