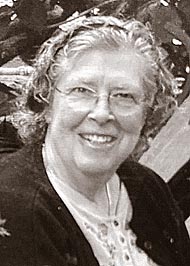 Joan Christine Edwards, longtime resident of Yellow Springs, died at Kettering Hospital on Dec. 2, 2019. Her health had been declining for the last several years. She was 76 years old.

Joan was born on Aug. 1 to Della and Hugh Edwards at the Marine Corps Base Camp in Lejeune, N.C., where her father was in service. The family moved from there to Mount Clemens, Mich., where Joan, an only child, grew up. She was particularly close to her cousin, Julianna Dawson.

A strong student, Joan earned her B.A. in biology at Albion College, where in her last two years she lived in the German House, where she had the chore of planning fire drills, which were in German and often at 2 a.m. She got her Ph.D. in endocrinology at the University of Michigan. She did her doctoral research on frog growth hormones and published two papers on that subject. She joined the Antioch College science faculty as an assistant professor of physiological ecology in 1976 and taught there through the spring of 1979.`

After leaving Antioch, she earned a degree in nursing at Wright State University. During her studies there, she worked part-time at Greene Memorial Hospital in Xenia. After earning her degree she became a full-time nurse in the emergency room, where she worked for well over 30 years. Enthusiastic about and devoted to her work, she said she became a nurse because she wanted to help people. Even before becoming a nurse she served the Yellow Springs community well as a member of the Fire and Emergency Squad, which she continued to do for many years.

Joan had a wide range of interests. Having played violin throughout high school and for at least two years at Albion College, she was a lover of music, particularly classical and jazz. She had a large collection of recordings and enjoyed attending concerts in Yellow Springs and elsewhere. She collected visual art as she could afford it and loved going to art shows — once even traveling with a friend to see two Breugel paintings in the Toledo museum. She was an avid photographer and became quite a good potter, who gave away pottery to friends. When her strong hands gave out, she gave away her potter’s wheel and took up knitting, again sharing her handiwork with friends. She was a member of the knitting group at the Senior Center. Joan was devoted to a series of dogs, including a Doberman, a German shepherd, a standard poodle and her last — a black Shih Tsu mix named Sadie. Badly malnourished when Joan adopted her, Sadie thrived under Joan’s care.

Joan liked to travel in the U.S. and abroad. Among her travels were a trip to the Galapagos Islands, a safari in Africa, a trip to Papua, New Guinea, and one to the indigenous American site of Mesa Verde in Colorado. A college friend remarked, “She adored hiking wherever she was.”

Anyone passing Joan’s house could see that she was an avid gardener. A friend noted that hers “wasn’t a yard you could just walk past.” She grew vegetables, perennials of many kinds and flowering and fruit-bearing trees. Every year she planted new colors/varieties of daffodils, bringing great pleasure to passersby. She often shared her fruit, vegetables and flowers with friends. An excellent cook, she enjoyed trying new recipes, and often invited friends over for a meal and a walk around the garden. Given Joan’s last hard years of declining health and other problems, it is heartening to remember how active she was in many ways during most of her life.

Joan was preceded in death by her parents and other relatives. She is survived  by her cousin Juliana Dawson, with whom she carried on a many-year correspondence, and by many friends in Yellow Springs, Indianapolis and Puget Sound. As she was a longtime member of the Yellow Springs Tree Committee when it was led by the late Lloyd Kennedy, friends will plant a tree in her memory. Those who wish to remember Joan may also give to the Glen Helen Association or the ASPCA.

One Response to “Joan Christine Edwards”