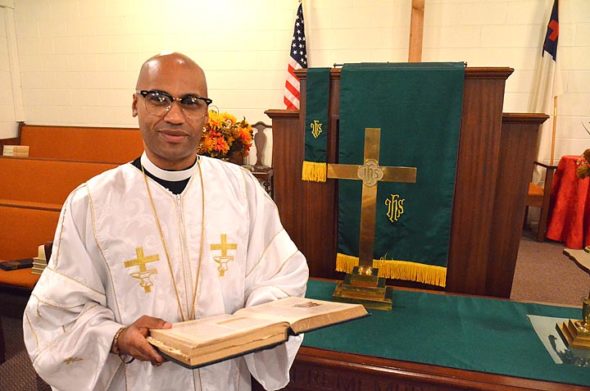 One of Yellow Springs’ oldest churches has an energetic new pastor.

The two pastors have overlapped for the past several weeks, as Meyer prepares to step fully into the local pulpit, and Smith readies himself to begin a form of semi-retirement known as “supernumerary” status in the AME church.

Meyer said in a recent interview that he’s delighted with the Yellow Springs appointment, which was somewhat unexpected.

“It’s a surprise and a blessing,” he said.

Hailing from Cape Town, South Africa, Meyer came to the U.S. in 2018 to pursue a Master of Divinity degree at Payne Theological Seminary in Wilberforce, where he currently lives. He’ll graduate from the program this spring, but plans to stay in the States — at least for a while.

Pastoral appointments are made for one year in the AME church, but are typically renewed for at least a few years, according to longtime Central Chapel member and steward Denise Lennon.

So Rev. Meyer could be the pastor of the local AME church for a while — and Lennon is hoping he is.

“He’s a very positive young man with a lot of energy and zeal for ministry,” she said.

Lennon was aware of Meyer well before he was assigned to Central Chapel in October by the district bishop. In fact, after she learned that Rev. Smith would be leaving, she immediately thought of Meyer as a potential successor.

“In my heart and soul I hoped it would be him,” she said.

Though relatively young, Rev. Meyer is a seasoned pastor, with experience leading congregations in both South Africa and Ohio. Last May, he was assigned to Zion AME Church in Delaware, Ohio. Due to personnel shifts within the larger AME district, he was reassigned to Yellow Springs this fall.

Already, he feels at home.

“Yellow Springs has somehow gotten under my skin,” he said, with a laugh.

The sense of community he feels in the village reminds him of his home in Cape Town, Meyer said.

“Where I came from, we’re a community. Since I’ve been in the U.S., I’ve missed that,” he reflected.

Meyer continued, “Here you feel it — it’s a community. People still walk to the store, walk in their neighborhoods. Yellow Springs has something different in the atmosphere.”

One of Meyer’s goals for his ministry is to increase outreach to villagers — to invite in new members who might be unfamiliar with the AME church outside of its annual Martin Luther King Jr. event, but would benefit from its “close-knit, caring” congregation and message of love and justice.

“The church needs to meet people where they are,” he said. “This is such a caring church — many people can benefit.”

The tech-savvy Meyer is using the hashtags “inclusion” and “inclusivity” when he posts photos online related to his ministry. And he anticipates launching a text message prayer line, which would allow people to text prayer requests to him.

“People are really excited about what he’s asking us to do,” he said.

Such efforts could help boost the church’s membership, which has declined in recent decades, in common with mainline denominations across the nation. On a typical Sunday, between 30 to 40 people attend worship at Central Chapel, and church rolls total under 100, according to McGruder.

Another of Meyer’s goals is to energize and involve area youth, which was also a priority of outgoing pastor Rev. Smith. Mirroring Yellow Springs as a whole, Central Chapel’s congregation tilts older, with the demographic of 18 to 35 notably absent from its pews, according to McGruder.

“That’s a gap that many churches wrestle with,” he said.

Meyer acknowledged that youth have many choices about how to spend their time and energy.

“Church in the U.S. is an option, not at the center of people’s lives,” he noted, contrasting that reality with a very different church-centered culture in South Africa.

Making youth feel valued will help bring them to church, he believes.

“Young people will choose what they see as valuable — which is where they themselves are valued,” he explained.

Meyer has tapped villager Phillip O’Rourke, a 1995 graduate of Yellow Springs High School who recently returned to town, to develop a plan for engaging local youth. O’Rourke brings experience as a youth leader and counselor, and is a new member of Central Chapel.

Echoing Meyer, O’Rourke said his key message to local youth is “you belong.”

“We want youth to know that in coming here, you’ll have a sense of understanding and belonging,” he explained.

“If we lose the youth, in the next five to 10 years, we’ll have beautiful buildings but empty pews,” he said.

Meyer himself grew up in a lively AME church in Cape Town, where his family of origin still lives.

“It’s the church I was raised in. I have a very strong AME family background,” he said.

His decision to pursue the path of ministry was a natural outgrowth of his love for church worship.

“Church was always my passion,” he said.

Meyer was ordained in South Africa, and led a church in Cape Town for 11 years. However, any advancement in the worldwide AME church requires a Master of Divinity degree, which is only available in the U.S. And so his passion for church led him here.

Those outside the African Methodist Episcopal church might think of it as  an exclusively African American denomination. But in fact, the AME church is a multi-racial and multi-ethnic international church active in 39 countries on five continents, according to the AME website. The church was founded more than 200 years ago in Philadelphia as an independent denomination for African American Methodists who faced discrimination in worship, according to official church history. The new denomination blossomed across the U.S. during the 1800s, and crossed the Atlantic to Africa in the 1890s, with churches established in Liberia and Sierra Leone.

To McGruder, Meyer’s background gives church members and local residents a unique opportunity to form a relationship with someone from Africa.

“It’s an opportunity for those of us of African descent to connect with someone coming from the continent,” he said.

Meyer is leading a trip to South Africa this spring, and Lennon is eager to attend.

“I look forward to going to his home,” she said.

“I just hope we can keep our energy up to his energy!” she said of the trip, and his ministry as a whole.

From his church office, where he can be found at least two days in addition to Sunday, Meyer spoke about his hope that Yellow Springs residents of all races, ethnicities and faith backgrounds would seek out Central Chapel.

“I have a deep love for the motivational and inspirational part of ministry,” Meyer said, characterizing his worship style as charismatic and high-energy.

He hopes people have a “Christ-like experience” in church — one that gives them “strength and power” to face the challenges of everyday life.

“I do know that everything hasn’t changed [on Sunday morning] — but something within us has changed,” he said.

Less than two months into his new ministry, Rev. Meyer has his sights, and his heart, set on “building a thriving church of inclusion” in Yellow Springs.

The village may be known as a politically liberal and secular-leaning community — but there is still room, in Meyer’s view, for the spiritual experience of the AME church.