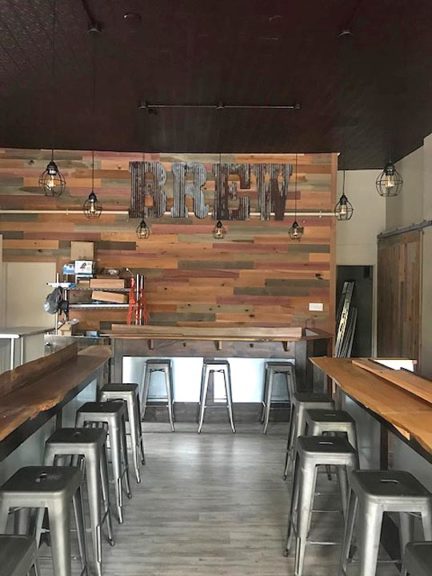 New brews are coming to Yellow Springs. After significant delays, Trail Town Brewery is on track to open for business this spring, according to owner Jake Brummett at the Dec. 10 regular session of Yellow Springs Planning Commission.

“We’re hoping to open in March,” he stated at the public hearing.

The brew pub will feature beer brewed on site, as well as food served as small plates, “shareables” and sides, according to Brummett. An earlier plan to serve Mexican-themed food is not being pursued. The business will be open daily from 11 a.m. to 10 p.m.

Brummett, who also owns Wander and Wonder on Xenia Avenue and lives in Waynesville, appeared before the planning board seeking reapproval of his conditional use permit to turn the former Williams Eatery at 101 Corry St. into a brew pub. Planning Commission had previously approved his application on Feb. 12, 2018. The original permit expired a year later, on Feb. 12, 2019.

According to Brummett, the brew pub has experienced delays in opening because the space’s plumbing and electric were not up to Ohio building code, as mandated by Greene County building regulations. New plumbing, new electrical wiring and enhanced amp service, a new kitchen and fully remodeled restrooms, bar and dining areas are among the renovations he has completed in the past nearly two years.

“Pretty much everything but the bricks are new,” he told members of Planning Commission.

Brummett said he was unaware at the time of leasing the space from owner Drenko Pureval, of International Transaction Inc./Tibet Bazaar, that such extensive remodeling would be required to meet county building regulations. The space previously had been leased by Fairborn-based restaurateur Lawren Williams and operated as a restaurant, Williams Eatery, since 2008. The eatery closed in late 2017 after business declined.

“I just didn’t know it was going to take this long or cost this much,” Brummett said.

Also included in the hearing was a review of the brew pub’s site plan. The new establishment will feature seating for 65 in two main areas: a dining room with seating for 44, and a bar area where the brewing will take place, with 21 seats.

The total seating is about the same as, or smaller than, Williams Eatery, according to Brummett.

The brew pub features woodwork from the late Paul DeLaVergne, a longtime villager who died in early 2019. DeLaVergne crafted tabletops and benchtops from wood salvaged from the former restaurant’s storage room, as well as a wooden bar top made from an ash tree taken down on the old Barr property, where Mills Park Hotel is now located.

“He did a lot of work for us; it was really good to get to know him,” Brummett said, adding that DeLaVergne did the work despite being nearly blind.

The new brewing operation will produce between 100 and 200 gallons of beer each week for consumption on site. While the brewing was originally envisioned to be located in the secondary “greenhouse” room, doing so would have constituted a “change of use” and triggered costly renovations, according to Brummett. That room is continuing as a dining room, with brewing taking place on the Dayton Street side of the building.

Brummett described a three-barrel brewing system involving four fermenters, with the capacity to add two more fermenters to potentially expand the brewing operation at a later date. The spent grain will be hauled offsite immediately after brewing to avoid odors, and will be made available to an area farmer for animal feed.

“I found somebody to take the spent grain and feed it to their hogs,” Brummett said.

An earlier plan to have an outdoor patio off the greenhouse room is not being pursued at this time.

The remodeled space still has to pass Greene County building and public health inspections, Brummett said at the hearing.

The planning board approved the application 3–1, with Council liaison MacQueen voting no because of a parking issue.

The outdoor patio will feature four or five tables on a section of the blacktop next to the south side of the restaurant. The new eating space will be enclosed by concrete blocks for safety. Five additional angled parking spaces have been created in the lot to accommodate potentially increased business.

According to Rainey at the hearing, he is creating the patio in response to numerous customer requests for outdoor dining, as well as to help market Calypso Grill, which opened in March 2018, to people driving by on Route 68.

“We feel like it will help grow the business to have people drive by and see people sitting outside,” he said.

During the hearing, Planning Commission also discussed the parking situation at Calypso Grill and neighboring businesses.

According to Zoning Administrator Denise Swinger, the zoning office has received a letter of complaint from the owner of a nearby business, Mindfully Well Center, concerning Calypso customers parking in her lot.

In response, Planning Commission encouraged Rainey to install parking signage in Calypso’s lot and arrange for overflow parking with one of several adjacent businesses. While MacQueen sought to make doing so a condition of the conditional use permit for the patio, her motion was not seconded.

Weather permitting, the patio will open in March or April, according to Rainey last week. He said he plans to have the concrete blocks painted with a beach scene to give the patio a tropical flair.

Note: the story has been edited from the original to correct a name.