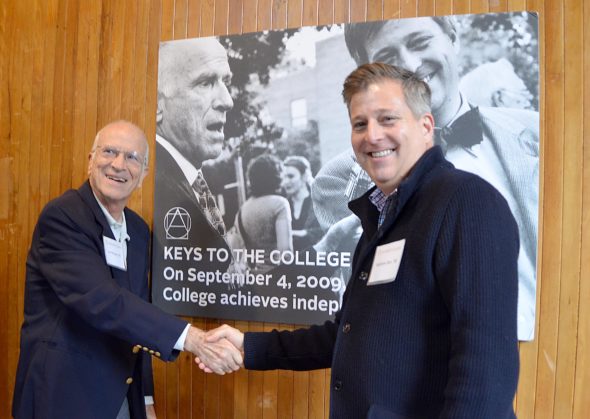 Antioch College celebrated 10 years of independence in October, commemorating the occasion when alumni bought back the college and helped relaunch the new Antioch. Here, Antioch alum Lee Morgan and Matt Derr, two individuals key to the effort, re-created a 2009 photo in which they received the keys to campus. (Photo by Audrey Hackett)

In January, the News reported on diversity and inclusion at Antioch College as part of a series about race and racism in Yellow Springs. With about 30% students of color and almost 20% LGBTQ-identified, Antioch is stepping up efforts to increase both diversity and inclusion through its curriculum, social justice co-ops, student-led groups and other means.

Also in January, Antioch and its homegrown radio station, 91.3 FM-WYSO, announced that the NPR affiliate would no longer be owned by the college — allowing each institution to focus on its own mission. At the time of the announcement, WYSO had raised most of the $3.5 million purchase price of the college’s FCC broadcast license, and was planning to become a locally owned independent nonprofit.

Celebrating April’s “Earth Week,” Antioch organized “Wade In,” a series of events and activities around themes of environmental justice and water. The week included a panel devoted to “re-indigenizing Antioch” — honoring and restoring local indigenous history and presence.

In May, after a rain delay of 150 years, the Cincinnati Red Stockings took on the Antioch Nine at the college, winning what would have been the first professional baseball game — had it happened as scheduled in 1869.

Twenty-seven members of the class of 2019 stepped around the ceremonial mound next to Main Building — not over it, as previously — to graduate from Antioch on June 22. The new graduation ritual honors the sacred nature of the mound, which is thought to be of indigenous origin. Shannon Isom, president and CEO of YWCA Dayton, was the graduation speaker.

The Antioch College Summer Institute debuted in July. With a theme of “Ways of Knowing,” the college offered public classes and panels addressing topics from artificial intelligence to bird language.

Antioch College Reunion brought alums back to campus July 12–14. The weekend included a panel on links between the college and the village and a talk by alumna LaShann DeArcy Hall, a federal district judge honored as the college’s second annual Higginbotham Jr. Distinguished Seminar speaker.

Also in August, Antioch alumna Esther Battle and her husband, David, donated their historic downtown building at 403 Xenia Ave. to the college. Conservation easements held by Tecumseh Land Trust protect aspects of the building’s historical exterior. By prior agreement with the Battles, the college put the building up for sale to help support its financial position.

In August, WYSO took its final step toward independence. On Aug. 30, the FCC approved the transfer of the station’s broadcast license from Antioch to new nonprofit owner Miami Valley Public Media. With the transfer complete, WYSO announced a leadership change: former development director Luke Dennis became general manager, and Neenah Ellis stepped down from the top spot to launch a new training institute, Center for Community Voices. WYSO remains on the Antioch campus — where station leaders say they plan to stay.

On Oct. 24, the college celebrated 10 years since reopening, with a day of events culminating in a festive reception at historic Antioch Hall (also known as Main Building), where a stabilization project is now underway.

In November, the News reported on phase one of the Antioch Hall stabilization project, whose focus is to add heat to the building. Phase one is being supported by a $500,000 grant from the Yellow Springs Community Foundation. A second phase will address the building sprinkler system, secure its doors and tackle other items. The end vision is for a collaborative college/community space.

Also in November, an Antioch College freelancer for the News reported on the array of student-led clubs on campus, organized around shared interests in anime, sewing, environmental issues and more.

In December, Antioch unveiled a new program to cover tuition costs for its lowest-income students, provide more financial aid for all students and expand work opportunities on campus, off site and after graduation. Antioch College Works will launch in the fall of 2020. The News will report on the new program in more detail in January 2020.

In February, AUM received a Celebrating Ohio Book Awards & Authors grant to purchase books of regional and state relevance for its library.

AUM hosted Ohio Poet Laureate Dave Lucas in March for a public reading and Q&A about the value and pleasures of poetry.

After more than 18 months of contract negotiations between faculty union representatives and university administrators, Wright State faculty went on strike Jan. 22. Those striking included a number of local residents who teach at the university.

At issue was the university’s contract offer to faculty, which included no raises, reduced health care, an erosion of tenure and other measures. The university board said the measures were needed to help Wright State recover from a loss of more than $100 million in reserves. Faculty argued that the contract offer was not an appropriate stopgap for financial difficulties incurred by overspending and poor financial decisions by university leaders.

Widely reported as the longest higher education strike in state history, the faculty strike lasted nearly three weeks. A tentative contract agreement was reached Feb. 10, under which faculty retained their right to bargain over future healthcare changes, and faculty returned to class Feb. 11. The new contract is retroactive to 2017 and ends in 2023.