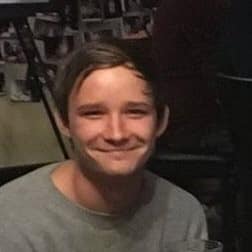 Villager Lonya Clark, 26, went missing in January. Clark’s body was found in April along the Little Miami River, and a former villager, Zyrian Atha-Arnett was indicted in November for his murder. (Submitted photo)

A local tragedy that unfolded over the course of 2019 began with the disappearance of well-known and widely liked community member Leonid “Lonya” Clark, who was last seen on Jan. 13. Officially reported missing in early February, subsequent searches with dogs in parts of Glen Helen Nature Preserve and John Bryan State Park, as well as community members joining an effort to check area outbuildings and other empty structures, revealed no trace of the 26-year-old.

Based on wounds to the body, the Greene County Sheriff’s Office determined his death to have been a homicide. The sheriff’s office, assisted by the state’s Bureau of Crime Investigation, initiated an investigation that continued into the fall, offering a $5,000 reward in June for any information that could lead to an arrest and conviction in the case.

He is accused of stabbing Clark to death on Jan. 13 at or near the location where Clark’s body was found.

Atha-Arnett entered a plea of not guilty at his arraignment in Judge Michael Buckwalter’s courtroom in Xenia on Nov. 21. He was represented by the public defender’s office, but family members are working to raise money to secure a local criminal attorney.

Barring delays or continuations, a jury trial is currently scheduled for Jan. 27.

Community members responded in outrage when local resident Miguel Espinosa, the owner and proprietor of Miguel’s Tacos food truck downtown, was detained by U.S. Immigration and Customs Enforcement, or ICE, agents after a local traffic stop in August. 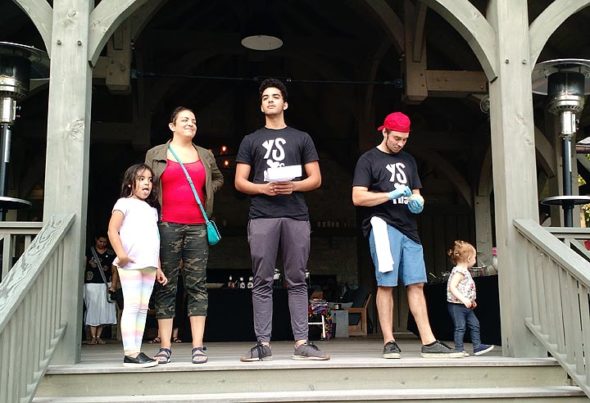 A benefit was held in September to support Miguel Espinosa, a villager and local business owner detained by U.S. Immigration and Customs Enforcement following a traffic stop in the village in August. Villagers wrote letters to an immigration judge and raised money for legal expenses. Above, his family read to the crowd a letter that Espinosa wrote in jail. (Photo by Megan Bachman)

Espinosa, a native of Mexico, has been in the U.S. since he was a youth, according to his family. He moved to Yellow Springs in 2016 with his wife, Dawn Boyer, a YS native, and their three children.

He was stopped by Yellow Springs Police Cpl. Mark Charles, near midnight on Aug. 26, accused of not coming to a complete stop before turning left from North Winter Street onto Fairfield Pike. Charles then transported Espinosa to the Greene County Jail based on his having three past traffic stops, including a DUI the year before. The majority of citations against Espinosa, however, are tied to his not having a driver’s license.

During his booking at the county jail, Espinosa’s fingerprints were uploaded on a national database, and that’s how ICE learned of his detention. Before family or local authorities could intervene, ICE officers had taken Espinosa to the Butler County Jail, which has a contract to hold federal detainees.

The community hosted informational meetings on Espinosa’s situation as well as immigration regulations and organized fundraisers for his defense.

The family hired a Dayton-based immigration lawyer who encouraged people to write letters of support to go to the immigration judge who would decide whether to allow Espinosa to be released on bond.

More than 120 letters were received by the Cleveland-based judge, who in September cited them as the main reason for his granting the bond request while Espinosa awaits a hearing to determine his immigration status.

That hearing could be as far off as two years away, according to his immigration lawyer. In the meantime, Espinosa is back at his food truck in the heart of downtown.

Issues of animal rights, sustainability and ecology converged this year in a controversy over the fate of nine lambs — also known as “solar sheep” — at the Antioch Farm. Part of the college’s farm-to-table program, the lambs were destined for slaughter this fall. But local resident and vegan scholar and activist David Nibert challenged the ethics of killing the animals for food, and launched an online campaign to pressure Antioch to release the lambs to sanctuary. Two national animal rights organizations took up the cause, and Antioch was inundated with thousands of calls and emails concerning the fate of the lambs. 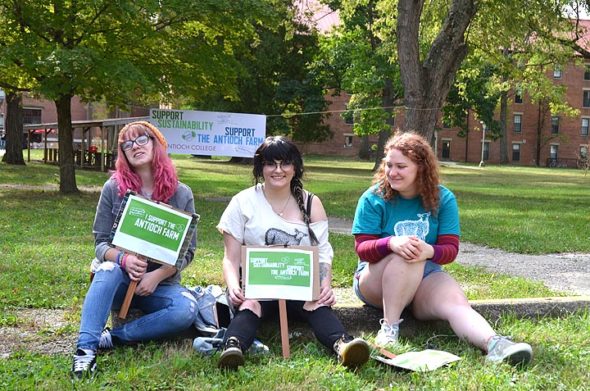 First-year Antioch College students, from left, Lisa Pennington, Samantha Maxwell and Zoë Johnson, held signs in support of the college and its farm-to-table program in October. A protest planned by local resident David Nibert, who opposes the college’s use of lambs for food, did not end up happening. (Photo by Audrey Hackett)

Antioch College held fast to its position that the locally raised and slaughtered meat was an ethical and sustainable part of its farm-to-table program. Animals and vegetables raised on the Antioch Farm and sourced from local farmers represent the vast majority of food served on campus, and the college has received national recognition for its sustainable practices.

A protest planned by Nibert for October didn’t take place, but at least a dozen Antioch students came out in counter-protest, expressing support for the Antioch Farm and its farming practices. Nibert later delivered a petition to the college with some of the 84,000 signatures his Change.org page had attracted online by late October.

Prompted in part by Nibert’s campaign, the News received about 40 letters on the topic, many from people outside the area and even country (the paper clarified a letters policy limiting out-of-town letters as a result of the letter volume). The “lamb issue” played out over seven months in at least 19 editions of the News. As one local letter writer, Carlos Landaburu, observed in July: “Their passing will not go unnoticed as they have received a level of notoriety unusual for a lamb.”

As of this writing, the lambs are presumed slaughtered; Antioch College has declined to comment further on the matter.

Branching out into county issues, the News this year reported on a plan to build a new, larger jail for Greene County. The proposed jail would increase the number of jail beds by 30%, and would consolidate the county’s two adult jails into a single new facility in Xenia.

The 500-bed new jail is projected to cost $70 million. By contrast, the total Greene County budget for 2019 was around $58 million. To pay for the facility, county commissioners passed a resolution in December to put a 0.25% sales tax increase on the March 2020 primary ballot. Voters will be asked to approve or reject that measure, which would be in place for up to 12 years.

County officials have said a new jail is needed to replace aging and outdated infrastructure, reduce overcrowding and better house different populations of inmates. A 2019 jail-needs assessment prepared by outside consultants recommended replacing the jail. The report also highlighted opportunities for reducing the jail population and better serving the mental health needs of those in jail. County officials have said that they plan to convert one of the existing adult jails into a drug rehabilitation and treatment center, to be operated by treatment specialists. No specific plans have yet been made.

By law, the county was required to hold two public hearings on the sales tax increase. Attendance was sparse, but members of the public who testified at the hearings (including about a dozen from Yellow Springs) were cautious or critical about the increased size of the jail. Those who spoke were worried that a larger jail would result in more people locked up, a concern that the consultant’s report also raises. And one of the county commissioners, while voting for the sales tax resolution, also voiced skepticism that a substantially larger jail was needed, in light of alternatives to incarceration, bond reform and other trends.

But Greene County Sheriff Gene Fischer has consistently stressed the county’s need for a new jail, adding that he does not anticipate filling it.

The News’ reporting on the issue included a five-part series looking at issues such as mental health and drug addiction. Those in jail disproportionately experience both.

In the first project of its kind, the Village tested out a new traffic pattern downtown for three weeks in the fall. The transportation project was billed as temporary, with the Village soliciting public feedback on how it worked via a survey.

The stated goal of the traffic test was to improve congestion and the safety of drop-off and pickup at Mills Lawn Elementary School, Village leaders said. Several of the street changes had been recommended in a local active transportation plan, completed in 2018.

As part of the traffic pattern change, a dedicated drop-off and pickup lane was created in front of Mills Lawn. And parallel parking spaces along South Walnut and Short streets were replaced with angle-in parking, with about the same number of vehicle spaces as before.

The Village’s survey about the initiative garnered 704 responses. The majority of respondents opposed making any of the changes permanent. At the same time, more survey respondents felt the changes made school drop-off safer for Mills Lawn students than didn’t.

Although the Village replaced a yield sign at the intersection of South Walnut and Limestone, no other changes were made by year’s end. However, Village Manager Josué Salmerón said at Council’s last meeting of the year that he thought the project improved traffic flow and safety whether or not it was popular and that parents in particular were supportive of the changes.

In survey comments, letters to the editor and letters to Council before, during and after the trial, many commented that the school district should create its own drop-off lane to solve the safety problem and that the changes should only be in place during school drop-off and pickup, among other feedback.

A full cost estimate for the trial has not yet been released by the Village, but at least $7,000 were spent on equipment and oversight of the project.