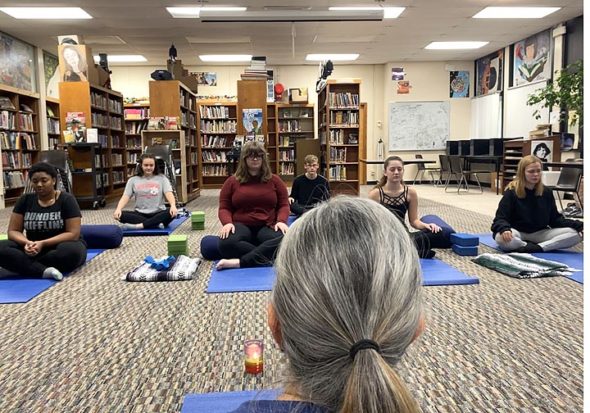 Yellow Springs High School and McKinney Middle School students this year have the opportunity to participate in an after-school meditative practice on Mondays and a yoga group on Wednesdays, both part of a new mindfulness program that also serves as an alternative to detention for some students. Intervention specialist Donna Haller leads both groups. (Submitted Photo by Desiree Nickell)

“It helps me relax.”

Kicking off his shoes and finding a comfortable position on a blanket laid out on the floor of Donna Haller’s second-floor classroom, eighth-grader Foster Shirkey was succinct and to the point recently in explaining why he shows up every Monday after school for a weekly 30-minute meditative practice led by Haller.

Shirkey is a regular presence in a new initiative on the shared campus of Yellow Springs High and McKinney Middle schools introducing mindfulness practices to students.

But there’s more to the initiative than providing a relaxing respite for participants. It’s also serving for some students as an alternative option to detention.

The district is responding to a growing body of research that suggests behaviors that traditionally put students in detention  — persistent tardiness, classroom disruptions, verbal altercations — are more effectively addressed with experiences that allow students to get in touch with their senses and calm their emotions.

Sitting at a desk for an hour after school doesn’t really promote the kind of personal reflection that leads to changed behavior, noted Principal Jack Hatert before the mindfulness programming launched in the fall.

Changing behavior, rather than strict punishment, is the preferred disciplinary approach for both Hatert and Vice-Principal Cameron McCoy, who has responsibility for much of the schools’ student discipline, the two administrators have said.

In addition to guided meditation on Mondays, the programming includes a yoga club, which meets for an hour immediately after school each Wednesday in the schools’ shared library.

Three months into the program isn’t enough time to assess long-term behavioral changes, but Hatert, when asked last month, spoke even more excitedly about the program than before it began.

“It’s been great,” he said enthusiastically in a conversation following a school board meeting.

He noted that one student who reluctantly chose yoga over detention came back the next week because he liked it so much.

“Everybody should do this,” Hatert said the boy asserted.

Ninth-grader Isabella Beiring is an ardent believer in its positive effects as well, regularly participating with both the Monday and Wednesday groups.

“I like learning about yoga and mindfulness in general,” Beiring said before a recent Monday session of guided meditation. “I like doing the poses.”

“It can help with stress and anxiety,” she said.

In establishing the after-school mindfulness activities, and approaching them as a way to address student behavior, Yellow Springs has joined a growing number of schools across the country that are adding yoga and meditative practices to the school day.

A 2015 survey conducted by the National Institute of Health found yoga being offered in more than 940 schools across the country, with more than 5,400 instructors trained to offer yoga in educational settings at that time. An article last year in the Philly Voice noted that federal data shows the number of U.S. children aged 4 to 17 practicing yoga rose from 2.3% to 8.4% —1.3 million to 4.9 million — between 2007 and 2017, with no indication of slowing.

The trend follows over a decade of research published in such peer-reviewed publications as the Journal of Child and Family Studies, which in 2009 published a study that linked mindfulness training — teaching children how to manage their thoughts and emotions — to reduced anxiety levels and increased attention spans.

At the same time, however, not every community where yoga has been introduced has been receptive. Some schools have experienced public push back, particularly in more socially conservative and rural areas, the Atlantic Magazine reported last year. Of particular concern in some school districts is the belief that yoga and meditation practices promote non-Christian beliefs.

Conversely, in places where yoga is offered in the context of gym or athletics, some spiritual practitioners have found fault with its presentation as mere physical exercise.

The newly introduced mindfulness practices fit into the district’s incorporation of social-emotional learning as part of the overall curriculum, according to Hatert.

The district for several years has been actively complementing academic classroom lessons with activities that address the needs of the “whole child,” including social and emotional growth.

The Day of Empowerment, started three years ago at the high school, and the Day of Discovery, introduced last year at Mills Lawn, where students explore identity and relationship building, are examples of some of the district’s efforts.

While Yellow Springs had already embraced the educational philosophy that focuses on all aspects of healthy child growth and development, the state of Ohio this year introduced standards directly related to social-emotional learning as part of the Ohio Department of Education’s, or ODE’s, five-year strategic plan, titled “Each Child, Our Future.”

In developing the plan, the ODE identified four “equal learning domains,” with one of the four being social-emotional learning.

According to the ODE, social-emotional learning includes “processes through which children and adults acquire and effectively apply the knowledge, attitudes and skills necessary to understand and manage emotions, set and achieve positive goals, feel and show empathy for others, establish and maintain positive relationships and make responsible decisions.”

Such learning is now ranked equally with the other three “educational domains,” identified as: foundational knowledge and skills, which include literacy, numeracy and technology; well-rounded content, which includes social studies, sciences, languages, arts, health and physical education; and leadership and reasoning, which includes problem solving, design thinking, creativity and information analytics.

In terms of social-emotional learning, the state has defined five “competencies” as the basis for its learning standards:

Yellow Spring educators believe that mindfulness practices such as guided meditation and yoga foster the whole-child development addressed in the new standards.

“Someone I know said that mindfulness and yoga have helped them with their ADHD and with processing an event where they had lost someone who was dear to them,” she wrote for a video project about the schools’ program.

Instructor Haller, an intervention specialist at the high school for the past nine years and a certified yoga and meditation instructor for adults and youth, believes that the practices can have profound effects on students. She leads both afternoon gatherings at the school, as well as community classes at Antioch’s Wellness Center and the House of Aum.

She said she began leading students in short mindfulness and yoga activities in her classroom about three years ago, and saw a positive effect, not only in students’ being able to manage stress and anxiety, but also in their attention and focus.

She went to Principal Hatert about offering longer sessions after school and wrote a $2,800 grant to the Yellow Springs Educational Endowment, or YSEE, for 20 sets of yoga mats, blankets, bolsters and blocks to complement the 10 sets she already had.

“I love it,” she said after leading a yoga nidra guided meditation last month. “It does as much for me as them,” she said of the calming, centering effects.

She said the participant turnout is different each week. Some sessions there are just two, others see a dozen.

For Wednesday yoga, the participants make space in the middle of the library floor for their mats. Haller sits in front of the group, quietly leading the students through a series of poses.

On Mondays, she welcomes students to  her cozy classroom, which she transforms for optimal comfort. The lighting is low, blankets cover the floor and an aroma of lavender fills the air.

Students find a spot to lie, many covering up with a blanket and closing their eyes as Haller speaks softly and calmly, focusing on deep breaths, relaxation and the space between the breaths.

She points to moments of tension release and tells the students that they can remember that feeling and go back to it during times of anxiety and stress during the school day.

The students are nearly asleep when Haller concludes the session about 30 minutes later.

Beiring said it has become an important part of her week.

“It puts your mind at ease for awhile,” she said.