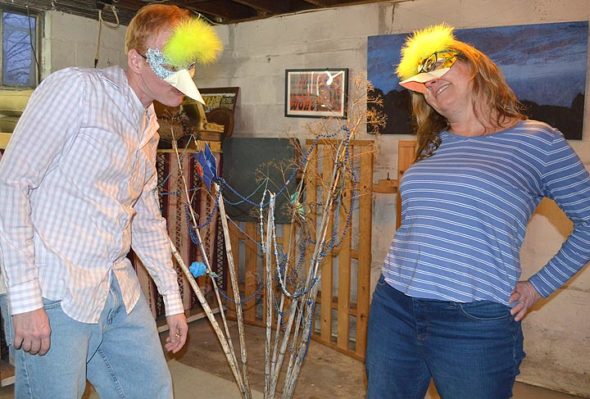 Virgil Hervey, an avid supporter of the arts, made the Yellow Springs 10-Minute Play Festival an annual event nearly a decade ago.

At this year’s festival — the 10th annual — the Yellow Springs Theater Company will honor Hervey, who died in December at the age of 75.

“Virgil did a lot to support art and artists and education in this community and I know for me, personally, he’s the reason that I’m here,” said Lorrie Sparrow-Knapp, the artistic director for the YSTC, in a recent interview.

The selections in the first half will be child-friendly. The second half will contain some adult themes and language and may not be suited for those below age 13. Attendees should also be advised that a prop gun will be used in one of the second-half performances.

The YSTC will honor Hervey by reading aloud some of his writings in-between performances. According to Sparrow-Knapp, who also teaches performing arts at Yellow Springs High School and McKinney Middle School, they hope to honor his “huge” artistic legacy.

Ellen Ballerene, who has been involved in the annual play festival since its inception, reflected recently on the growth of the event. This year she expects a crowd of about 200, and the festival will show 30 plays.

“I mean, I remember years when we didn’t get 10,” Ballerene said.

The money brought in by the event also helps fund the YSTC’s different projects throughout the year, according to Ballerene, a board member of the YSTC and the coordinator of this year’s festival.

Ballerene has her hands full this year — in addition to coordinating the event, she will also be directing two plays and acting in another two. She is also in charge of getting together all the props and set pieces.

The plays range from funny to serious. The festival will also have a musical piece this year, a first for the event.

“You get a variety of different things,” Ballerene said. “Some of them are comedies, some of them are little short stories or vignettes or dramas, so it can appeal to everyone.”

Ballerene, who is also a psychiatrist, first moved to Yellow Springs in 1999, left in 2003, and returned four years later.

“Ellen has really just been influential and wonderful and really keeping us all going,” Sparrow-Knapp said.

Hervey took the reins in 2011 and, with the help of Kay Reimers and the Center Stage Theatre Company, made sure the festival was an annual event. Center Stage hosted the festival until 2015, when the new Yellow Springs Theater Company took it over.

Sparrow-Knapp said the festival started with all Yellow Springs writers, and organizers have made a point to keep it mostly local.

Over the years, however, the festival has expanded to include writers from the surrounding Miami Valley area and beyond. Many who have participated in the Antioch Writer’s Workshop have sent in plays over the years as well.

According to Sparrow-Knapp, work from the Miami Valley area is taken into consideration first. The area has many good writers, she added.

Many of this year’s plays have been written by Yellow Springs writers, but the festival will also include plays by writers from Beachwood, Ohio; Burbank, Calif.; and an Antioch College alumna who lives in New York City.

According to Ballerene, having mostly local writers has the added benefit of allowing them to be more involved in the production of their own plays.

Sparrow-Knapp believes there is a need to hear new voices and that playwrights reflect the truth of their time.

“Plays are living things, and the people who write them are capturing a moment or a snapshot in time that needs to be reflected,” she said.