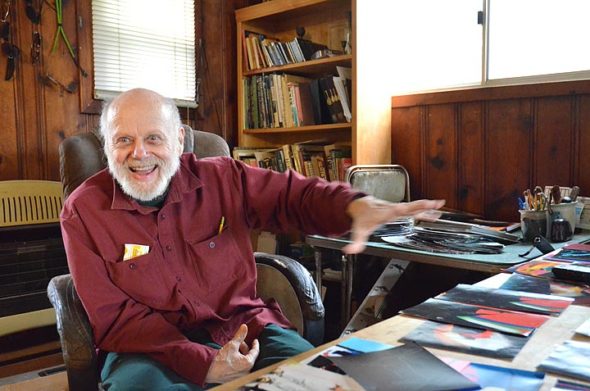 Now 82 and living with Parkinson’s disease, painter Jack Merrill continues to pursue his art. Merrill’s work is on display at three local venues this year, giving villagers a rare chance to see the paintings and drawings of a longtime local resident who has worked exuberantly, if privately, for many years. (Photo by Audrey Hackett)

A series of occasional articles exploring the lives and contributions of villagers 80 years and older.
If you’d like to suggest an elder for the News to profile, email ysnews@ysnews.com.

Three shows in a year is a lot for most artists. But for 82-year-old Jack Merrill, who has rarely exhibited his work, it’s an astonishing richness.

“I’m so happy with myself as a painter right now — the happiest I’ve ever been,” Merrill reflected in an interview last week.

His grin, and the gleam in his eyes, confirmed it.

Alongside his day job as a local house painter, Merrill amassed a substantial and mostly unseen body of art, much of it abstract expressionist in spirit and style. Over the past decade, he’s been affected with Parkinson’s disease. While the degenerative illness has curtailed aspects of his art — “I’m 25% of the person I used to be,” he said ruefully — Merrill continues to draw and paint, modifying his paintings using the computer to create vivid hybrid works that he prints out on glossy photographic paper.

Two of his shows this year will focus on those more recent works.

Currently, eight pieces are on display at Glen Helen’s Vernet Building. That show was initiated by Henderson, who is also organizing a larger exhibition of Merrill’s works at the Emporium this fall, scheduled to open Nov. 14.

And a third show is being presented on two upcoming dates by local artist Bruce Parker. Held in Parker’s studio at 477 Yellow Springs Fairfield Road. (just past the Miami Township Road Department), the show will be open in conjunction with Third Fridays on Friday, Feb. 21, from 6 p.m. to 9 p.m., as well as on Sunday, Feb. 23, from 2 p.m. to 5 p.m.

About 20 of Merrill’s works on paper will be hung around the studio, with stacks of several hundred other pieces available for visitors to browse, and purchase.

“I just wanted to have a show for him at my gallery,” Parker said, adding that he found Merrill’s colorful, energetic work “really striking.”

Parker rescued the pieces from Merrill’s longtime studio, a barn at the back of his former Phillips Street home, before both home and barn were leveled last year. But that’s getting a little ahead of the story.

‘I followed the freedom’

Merrill was born in Detroit in 1937, and grew up in St. Paul. He didn’t come from an artistic family, though his mother took up painting in her later years. Asked to recall his earliest piece of art, Merrill remembered carving a little elephant out of a bar of soap as a third grader, when he was home from school with one of the many childhood illnesses common in the 1940s.

Flash forward a few years. A skilled high school athlete — he excelled in tennis, golf, football and basketball — Merrill graduated in 1955 and enrolled in college for a quarter, taking a drawing class. He loved it, and got an “A.” Around this time, he also saw a film that influenced him powerfully: “Lust for Life,” about the tortured life and transcendent art of Vincent Van Gogh.

“I went one afternoon and the theater was empty. There on the screen all those colors were washing over me,” he recalled. 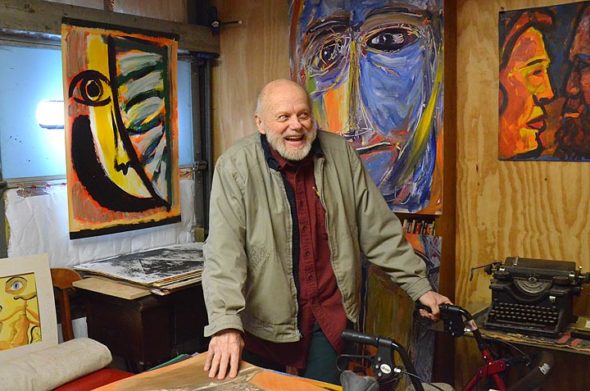 Vibrant works on paper by Yellow Springs painter Jack Merrill will be on display — and offered for sale — at Bruce Parker’s studio at 477 Yellow Springs-Fairfield Road on Feb. 21 and 23. Merrill is pictured here visiting the studio to preview the show, organized by Parker in collaboration with other villagers. (Photo by Audrey Hackett)

Merrill didn’t continue with college, enlisting instead in the military for four years. His stations included one year in Long Beach, Calif., and two years in Japan. As a result of his service, he was eligible for money for college. So eventually, at age 36, he enrolled in art school at the Dayton Art Institute — the museum then offered a four-year art degree — in part because a friend taught there.

He spent the first year learning to draw, his shoulders “all up tight trying to get it right.” It took him a year to loosen up.

And when he did, he never looked back.

Merrill vividly recalls his “biggest day” in art school. He put a huge canvas on the floor and whipped a line of paint through the air, emulating his then-favorite artist Jackson Pollock, or “Jack the Dripper,” as he was known by critics of the day.

“It released so much energy in me,” Merrill said.

Recalling the moment nearly 50 years later, Merrill rose up out of his chair to demonstrate, floating his arms in the air.

“Doing it is like dancing,” he said of the art of painting freely, and big.

When he later saw a Pollock painting in person at one of the New York museums, he was awed.

Merrill fell heels over paintbrush in love with abstract expressionism, a more spontaneous and gestural form of art practiced by Pollock and others.

“Abstract expressionism is trying to get at an artist’s psychological self — his hidden self,” Merrill explained.

That appealed to him as a young man, and still appeals to him. For years, he painted standing over his canvas on the floor, so that “I could visually take in the whole painting.” He followed the painting’s lead, he said.

“I never started out with a preconceived idea,” Merrill explained.

Painting in a loose, improvisational way gave him freedom — and it was freedom that he was after.

“Painting was an area of freedom. It was the only place in life where I made all the rules,” he said.

“I followed the freedom,” he added of his choice to become a painter.

When Dayton Art Institute’s art school closed before his final year, Merrill transferred to Wright State. He racked up lots of credits, all in art, but failed to meet the college’s distribution requirements to get a degree. But that didn’t matter, he said.

Merrill moved to Yellow Springs in 1973 with his then-wife, the late Kathy Merrill, a violinist with the Dayton Philharmonic Orchestra. The couple divorced after six years, but Merrill opted to stay in the village.

“There was never a question in my mind about moving,” he said. “I felt like I’d found my home.”

He built up a house-painting business here, working first on exteriors, then, as his skills developed, painting interiors. He got to know a lot of local people that way, he said. After a few years, he had enough business to support himself, never working more than 30 hours a week to leave time for his other painting job — his personal art. He also rented out rooms to help make ends meet.

“Everything I did was toward supporting my painting,” he explained.

In the 1980s, he bought a home on Phillips Street, next to villager Jane Baker. An art collector, Baker acquired one of Merrill’s paintings featuring bright blocks of color. People who come to her art-filled home for the first time often ask whether it’s a Mark Rothko, she said, referring to the abstract expressionist known for his “color field” paintings.

For years, he painted mostly in acrylics, buying half-gallon jugs of paint, which cost $100 to $200 each. He liked the vibrancy of acrylics, and his expressive technique required a lot of paint.

Merrill used the barn in back of the house as his studio, spending up to six hours there each day.

“It was the highlight of my day,” he said.

Often he was slow to start, with his first two hours dedicated to “fooling around” with a drawing or painting until “something happened.”

“Finally my brain would switch to the right side, and then things got exciting,” he explained.

In the throes of painting, he often felt he was doing his best work. The thrill of that spurred him onward.

“I would think, ‘This is going to be a really great painting,’” he recalled. His belief might evaporate the next day — but there was always another day, and another painting.

“I was always searching. I never got that focused on a particular subject or style,” he said. That might have hampered his professional career, but it made the experience of painting all the more exciting, he reflected.

“Painting is a real joy. The doing of the painting is what it’s about,” he said.

And after hours in the studio, he would emerge to a world transfigured.

“I would look at a tree next to my studio, seeing it without a filter,” he recalled.

Sometimes Merrill would go for three or four days at a stretch without talking to anybody. A quick trip to Weaver’s grocery (now Tom’s Market) would reacquaint him with society.

“I would talk to a few people in the first aisle, then that was enough,” he said, chuckling.

He was close with some artists in town, including the late Alan Macbeth, who organized a life drawing group that Merrill was in for 10 years. And he had several romantic relationships, including with the late Debbie Stokes of Wilberforce, whom he remembers with deep fondness. But mostly, his life was pretty solitary, he said. Solitary, yet full of the excitement of art.

“I got the big payoff,” he said. “I wasn’t too successful, but my life really was rewarding.”

For the past couple of years, as Merrill’s Parkinson’s has worsened, he has lived with his sister and brother-in-law, Nancy and Charlie Bunton of Greenleaf Gardens. His old Phillips Street house sold last spring, and the new owners opted to level the house and barn — a source of sadness for Merrill.

“I feel like my history in Yellow Springs has been wiped out,” he said of the property where he lived and painted for 32 years.

But in fact, his history is here, more visible than ever.

As Merrill looked around Parker’s studio at a lifetime of his artwork stacked on the tables and hanging on the walls, he was visibly moved.

“This is the autobiography of my whole life,” he said.

And his assessment of the work was positive — surprisingly so, he said.

“Some of these are pretty exciting. They have more going for them than I remembered,” he observed.

Henderson, who helped select the works highlighted in the show, offered her view that visitors will be delighted by the immersion in Merrill’s vibrant world.

“You’re surrounded by it. You really feel the intensity of his intensity,” she said.

That intensity shows no signs of abating.

As the November show at the Emporium begins to take shape, Merrill is exploring the possibility of combining individual works into larger collages. From his cottage at Greenleaf Gardens, he has been combing through stacks of colorful computer-modified images — up to 3,000 in all. Doing so has been re-energizing and gratifying, he said.

“I’m beginning to like them,” he confessed, with a huge grin.

Henderson acknowledged that the Emporium show, while a retrospective of sorts, could include work that’s two weeks old, given Merrill’s propensity to create new work. And that’s just who he is, she added.