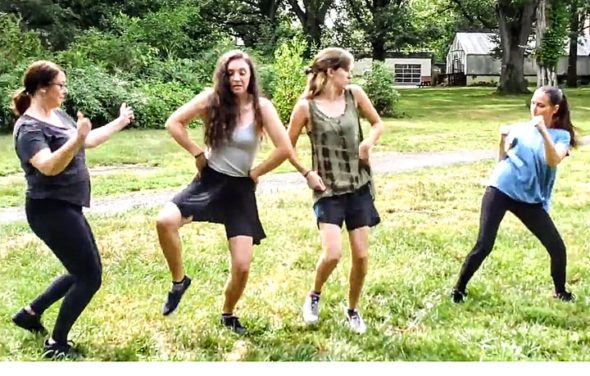 Still from Chloe Ramsay’s submission to the 2019 “Dance Your PhD” contest, based on her research into co-infections in frogs. At left are viruses, played by Keri Speck and Charlotte Walkey, and at far right is a fungus, played by Vicki Walters, converging on the frog, Ramsay, at center.

What’s the best way to connect with the public on the basics of an area of scientific research?

Through dance, of course.

That’s the thought process behind “Dance Your PhD,” a contest sponsored by Science Magazine, now in its 12th year. As explained on the contest’s website: “Don’t you wish you lived in a world where you could just ask people to pull out their phones to watch an online video explaining your Ph.D. research through interpretive dance? You do live in that world!”

One entrant into this year’s contest is Chloe Ramsay, a former villager who’s currently finishing up her Ph.D. in the Department of Biological Sciences at the University of Notre Dame. Ramsay said via email this week that she heard about the contest through a former roommate who’s into science outreach, but not so big on dance. Ramsay, however, comes from a dancing family and has taken a wide range of dance classes since she started her undergraduate studies — she’s currently taking a Latin dance class.

Intrigued by the idea, Ramsay rounded up a cast of villagers, both current and former, to present her Ph.D. research, which focuses on diseases in frogs, in dance form. Some dancers portrayed frogs, and others depicted the ailments — viruses, fungi and worms — that tend to beleaguer the amphibians.

Ramsay didn’t rely too much on formal choreography — “which you can probably tell,” she said — but instead worked with folks who are either dancers or actors, or both, who were comfortable with improvisation.

“I tried to come up with a couple of signature moves for each group … in advance, but how each group used the moves were improvised,” she said. “Occasionally a group organized some choreographed movement, but it happened in the few minutes right before we filmed.”

The dance, which is around six-and-a-half minutes long, was filmed over the course of two sessions in August of last year, and took around six hours total to film. Cameron Henderson was the camera operator for the project, and Rourke Papania served as narrator. The video stars Ramsay, Vicki Walters and Molly VanMeter as frogs, with Walters also portraying a fungus, along with David Walker. Ramsay’s mom, Ali Thomas, dances as a worm, along with Elliot Cromer and Adam Zaremsky, and Ramsay’s sister, Charlotte Walkey, dances as a virus with Keri Speck.

“Everyone showed up invested and really gave it their all,” Ramsey said. “It was a phenomenal group.”

Ramsay said filming took place just after she’d returned from a scientific conference in Kentucky where she’d given a talk, and that it was a relief to spend some time dancing with friends after the intensity of that event.

“Editing this video and organizing everyone took some work, but it was work I definitely looked forward to on the weekend,” she said. “Ever since I started dancing, it has been a stress reliever, and this project was no exception!”

Winners of the contest will be announced later in the year; the grand prize video will receive $1,000. View Ramsay’s dance below.