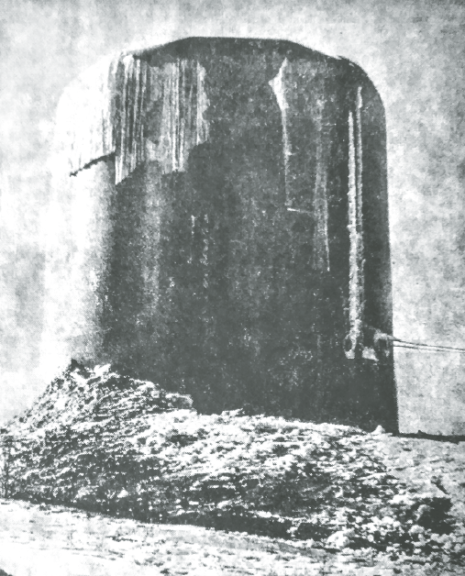 Village water tower at Gaunt Park with its “flat-top” look. The top collapsed Saturday Jan. 30, 1977, when a million gallons of water poured out a break at the bottom, creating a vacuum inside. (News archive photo by Bill McCuddy)

From the Archives: The winter the tower exploded

On Sunday, Jan. 31, 1977, Yellow Springs residents received calls from village volunteers asking them to conserve water. The reason? The water tower at Gaunt Park — there was only one then — had blown a seam and released a million gallons of water into the park.

The village had been experiencing a deep freeze that month, with the YS News reporting on the sub-zero temperatures for several weeks leading up to the water tower’s destruction. These temperatures apparently froze one of the tower’s three pumps, which acted as a catalyst for the disaster.

“Why it happened still isn’t absolutely clear,” wrote Bill McCuddy in the Feb. 2, 1977, issue of the News, but the failure of the frozen pump may have created a build-up of pressure. This, combined with a thick crust of ice inside the tank and on its surface, clogging the air vents, made the tower “take off like a rocket,” with one edge of the 3,000-ton structure lifting “12 inches off the ground.” The sudden loss of water from the bottom of the tower created a vacuum effect, causing the top of the tower to collapse.

Villagers volunteered to call their neighbors and alert them about the need for water conservation during this critical period; others walked door-to-door to pass out instruction sheets. WYSO also got the word out, and by noon that same day, service was restored in the village thanks to the quick work of the Village crew, though water was still at a premium. More volunteers came out to chip away at the ice that had formed as a result of the spilled water. Among them were Andrew Bent, Donna Morgan, Richard Zopf and Tony Bent.

Current Village Meter Reader Rose Pelzl, who related the story of the fateful implosion to the News this week and prompted this dive into News archives, reported hearing from co-workers that folks even came out to ice skate on the newly frozen land.

A combination of insurance payouts and federal funds meant not only that the existing tower could be repaired, but that a second tower would be erected. It was completed in August of 1978 and, after major leaks caused a false start that month, the tower’s tank was finally filled on Thursday, Sept. 28. The new tower doubled the Village’s water storage capacity from 1 million to 2 million gallons.