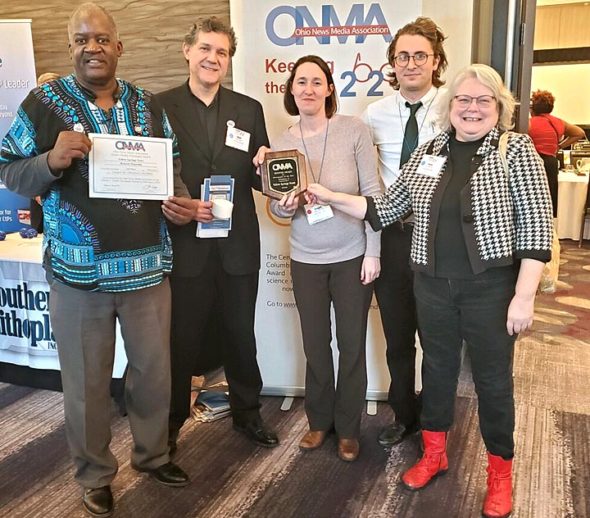 Representing the YS News at the Ohio News Media Association annual convention in Columbus on Thursday, Feb. 6, were, from left, columnist Bomani Moyenda, head designer Matt Minde, editor Megan Bachman, production assistant Reilly Dixon and reporter Carol Simmons. The News won “Newspaper of the Year” for the 10th year in a row, along with 17 individual awards.

The Yellow Springs News was honored by its peers last week as the “Newspaper of the Year” among comparable papers in Ohio.

It was the 10th straight year the News brought home the top prize from the  Ohio News Media Association.

The News competed against eight other weekly papers across the state with circulation below 2,500. The competition ran from August 2018–July 2019 and awards were given at the association’s annual convention on Thursday, Feb. 6, in Columbus.

The News placed in News Coverage, In-Depth Reporting and Original Columns and won three additional photography awards. The paper came in fourth place for Best Website in a larger field of 28 papers.

In Newspaper Design, “Yellow Springs was the clear winner in this division,” a judge wrote. “The overall design is the right balance of photos and text. The clean design is organized and uses consistent headers to help the reader move through the paper.”

The Page Design award was for a photo spread featuring the murals of Yellow Springs. A judge noted how “all the elements of the design work together,” including “the variety in shape of the photos” that “adds appeal yet allows the photos to work as one visual unit.”

News reporter Carol Simmons won two first-place awards for her articles. She won Best News Story for her May 9, 2019, article, “Dress code comment spurs controversy,” as well as Best Sports Feature for “Squad cheering ‘for all girls’” — “a timely story about the school’s push for equity in cheerleading,” according to a  judge.

Former editor and freelance reporter Diane Chiddister won Best Local Profile for her April 11, 2019, story, “Joe Ayers: a fixer of people, things.” “This profile made me laugh out loud,” a judge wrote. “All the points in his life transition smoothly and it was a quick read!”

“Sounds of the Springs,” the 2018–19 Guide to Yellow Springs won first for Special Edition/Section. A judge commented that it featured, “interesting and well-written stories about artists — famous and not-so-famous — who have helped to give Yellow Springs its special personality.”

The News also won second in In-Depth Reporting for its 2018–19 series, “The Persistence of Racism in Yellow Springs,” with stories written by Bachman, Simmons and Chiddister. A judge commented, “Strong and thorough overview of anti-racism and pro-diversity challenges and efforts in the community. Strong local reporting augmented with review of scholarly research and expert testimony.”

Two News columnists received awards. Bomani Moyenda won second place in Original Columns for “Sanoka Talk.” A judge noted, “The author offered a very personal perspective on events happening around him — forcing readers to see, and perhaps understand things through the eyes of someone else.”

Village Desk Editor Lauren “Chuck” Shows won third place for “Thought for Food.” “I like the premise of this column,” a judge wrote, “using basic staples as symbols of the life around us.”

• Hackett won first place for Best News Photo for a photo of the Yellow Springs Children’s Center. “I thought the flash of humanity within the image made it the most compelling image of the group,” according to a judge.

The News is owned by Minde, Bachman, and advertising/business manager Suzanne Szempruch.

2 Responses to “‘Newspaper of the Year’— News wins state awards”