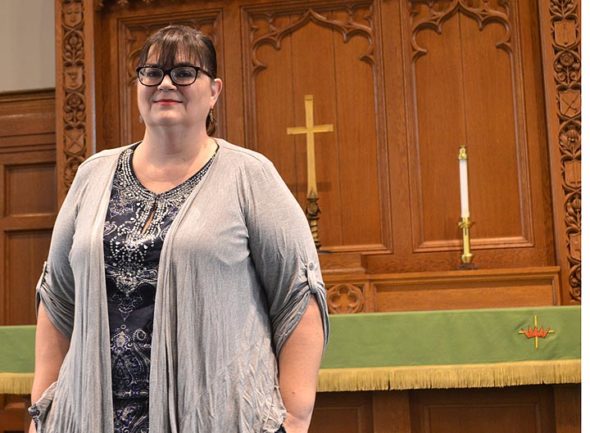 The Rev. Daria Schaffnit is the new pastor of the First Presbyterian Church. Schaffnit, who grew up in Yellow Springs, has a masters’s of divinity from United Theological Seminary and is ordained in the United Church of Christ. She hopes to grow the church’s children’s program and cultivate conversations with congregants in more informal settings, among other plans. (Photo by Nora Jaara)

The Reverend Daria Schaffnit’s journey to fulfill her calling has led her back to Yellow Springs, where she hopes her work with the First Presbyterian Church will have a positive impact on the community.

“There’s a portion in the Bible where the prophet Micah says that what God wants from us is for us to do justice, love kindness and walk humbly with God,” Schaffnit said. “And I think that this church can be a powerful force for doing that.”

Schaffnit, 49, succeeds the Rev. Aaron Saari, who served as the church’s pastor from 2014 until last year. After Saari’s departure, Rev. Kathleen Burslem and Rev. Marcy Bain served as interim pastors at the church.

Schaffnit grew up in the village and graduated from Yellow Springs High School. She previously served as an associate pastor of faith formation and family life at David’s United Church of Christ in Kettering.

Schaffnit wants to help people foster connections with their faith and the community. She has started coffee shop talks, a practice she had when she was at David’s United Church of Christ, where she makes herself available for conversation outside of church.

According to Schaffnit, it allows congregants to speak with their pastor in a more relaxed setting, free of structure and pressure. It also gives people who don’t ordinarily feel comfortable going to church an opportunity to speak with a pastor.

Another one of Schaffnit’s goals is to make sure the church has a strong children’s program and is making children feel heard.

As a child, Schaffnit often went to church with her Presbyterian grandparents. She grew up attending Westminster Presbyterian Church in Xenia. She credited her mother, who didn’t engage in organized religion, with allowing her to explore her interests.

“My mom was a really good parent in that she wanted to allow me the leeway and the freedom to explore and learn about the world on my own terms, so she would help facilitate whatever I was interested in,” Schaffnit said.

In her 20s, Schaffnit remained spiritual but not religious. She received her bachelor’s degree in history from Wright State University in 1994 and considered becoming a teacher.

After meeting her wife, who had two children and was also raised Presbyterian, the couple decided exposure to the church and religious education might benefit the children.

But even after returning to the church, Schaffnit still didn’t see herself becoming a pastor.

“Then we got a new pastor at our church, who was amazing,” Schaffnit said.

The Rev. Brian Maguire served as the pastor at Westminster Presbyterian for 10 years. His wife, Lisa Hess, is also an ordained pastor and teaches at United Theological Seminary in Dayton. Although Schaffnit still felt she didn’t belong in seminary, she was curious about the possibility.

“At the time, the Presbyterian Church was not ordaining openly gay people, and so I assumed that I was supposed to be teaching religion in college or something like that,” Schaffnit said.

Schaffnit started at United Theological Seminary in 2005, where she received her master of divinity. She became ordained in the United Church of Christ in 2010. Ministers ordained in the UCC can also serve the Presbyterian Church.

Before landing at David’s United Church of Christ in 2010, Schaffnit worked as a spiritual coach in Michigan and Colorado, which entailed helping individuals and leading retreats. Schaffnit said she plans to stay in town permanently.

Schaffnit hopes to help people connect with God, but taking the time to connect can be difficult due to the busy nature of people’s lives.

However, Schaffnit believes people don’t have to always practice formally to be in touch with their faith and to take Sabbath time.

“I think we all as a culture need to be more intentional about Sabbath time,” Schaffnit said.

Doing any activity, such as baking bread, that creates space in one’s mind to connect with God, can count as Sabbath time, according to Schaffnit.

On any given Sunday, the 165-year-old local church will have 25 to 35 people in worship and has about 60 members overall, according to Schaffnit.

Increasing membership and participation is a challenge for many churches because of the secular nature of our society, according to Schaffnit.

But Schaffnit believes the church can attract more people by having consistent quality worship, maintaining involvement in local activities, and fostering a sense of community.

According to Schaffnfit, the most important growth is that of the church body being a positive force in the world. That includes aiming to reduce oppression, increase justice, and “trying to be the hands and feet of Christ.”

“I think all churches can grow in that way,” Schaffnit said.

Schaffnit also hopes the church can be a home for students in the area, as well as for people who consider themselves spiritual, but not necessarily religious, and might be surprised by what they find when attending church.

First Presbyterian Church is a More Light Church, which means it welcomes members of the LGBTQIA+ community. Schaffnit said anti-racism is also an important justice issue.

Schaffnit said she wants people to know that the church welcomes everyone, whoever they are or where they are in their life or their faith. She believes Jesus would not have espoused exclusion and that people should remember they are all connected and all beloved children of God.

*Jaara is a freelance reporter for the News.