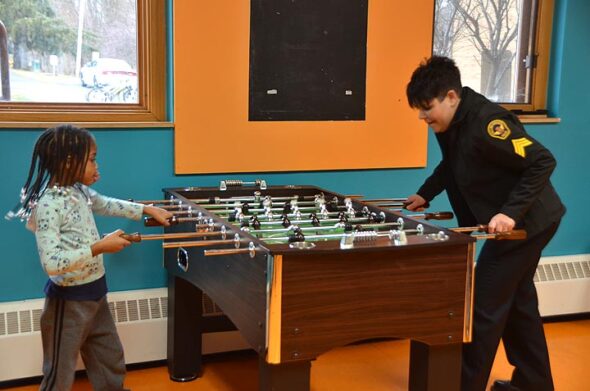 The Youth Center at the John Bryan Community Center was in full swing on a recent weekday afternoon. Kyla Randolph was beating YSPD Sergeant Naomi Watson at Foosball, despite Watson’s apparent efforts to best the six-year-old. The after-school youth center is going strong after nearly 50 years, with local officers recently becoming more involved as helpers and mentors, thanks to YSPD social worker Florence Randolph. (Photo by Audrey Hackett)

Games, homework help, an open gym, lots of other kids, food if you need it and guidance from caring adults.

Not to mention the opportunity to triumph over those same adults — local police officers included — in pool, Foosball, air hockey and other games.

That’s the John Bryan Youth Center, according to some of the kids who hang out there and the adults who work or volunteer at the after-school activity spot at the John Bryan Community Center.

“This place is awesome,” 10-year-old Sherrod Wheeler offered on a recent afternoon, racing from the game room to grab a ball and head to the gym next door to play a catch-and-tag game with friends.

Open Mondays through Fridays from 3 to 9 p.m. and Saturdays from noon to 4 p.m., the local drop-in youth center is free and open to all kids ages 10 to 18. Younger kids accompanied by parents or other adults also make use of the center, according to Parks and Recreation Coordinator Samantha Stewart, who oversees the center and has been involved in some capacity since 2002.

“We’re here, absolutely free, six days a week for kids,” she said. “I can’t think of any other thing like it.”

A recent renovation, in early 2018, has added fresh paint, new flooring and an overall vibrancy to the dedicated youth space tucked next to the Bryan Center gym. Stewart credits Village Director of Public Works Johnnie Burns with pushing the project forward.

“He saw a need for it and really made sure we got it done, budgeting-wise,” she said.

While the adjacent gym is rented out by the Village for other uses, the youth center game room — complete with comfy chairs, various tabletop games, art supplies, computer stations, a TV and more — never is.

“It’s for the kids,” Stewart said.

The youth center’s primary purpose is to provide a safe, supervised place for young people to come after school — especially those a little too old for daycare, but a little too young to stay at home by themselves, according to Stewart.

“We’re really popular with the 10-to-12-year-olds,” Stewart said, noting that as young people enter their teen years, they tend to “age out” of the facility.

While the center is a form of support for local parents who work late, it is not a formal childcare facility. Kids are asked to sign in and sign out of the center, but aren’t required to stay on the premises for any period of time. Parents do not make any formal arrangements with staff, and typically are not the ones dropping kids off after school.

Stewart noted that the youth center in past years has had a somewhat negative reputation, stemming from the perception that the kids who attend might come from troubled homes or have behavioral issues.

“Kids that come here have been judged by other parents,” she said.

About 20 local youth sign into the center on a typical day, many coming several or all days of the week, according to Stewart. She said it was hard to calculate the total number of kids served by the center because staff members don’t formally track attendance. Staffed by Stewart and local residents Devon Lewis and Phillip O’Rourke, the center has an annual budget of $5,000 from the Village of Yellow Springs. That’s supplemented by many donations of games, food and other items from Village staff and the Yellow Springs community, according to Stewart.

“People are incredibly generous,” she said. “This is very well-supported by the Village, Village staff and community.”

Anderson said she’s been coming to the center for years, bringing dinner one night per week — a big bag of burritos on a recent Thursday — and just “chilling” with local youth.

“I just love them. They’re my little tribe over there,” she said.

Anderson has high praise for Stewart, who she said manages the center with caring and firmness.

“There’s a lot of love and care in that room,” Anderson said.

Weekday afternoons, kids from Mills Lawn School walk in a big group down Xenia Avenue to the center, arriving as it opens at 3 p.m. Some stay for a couple of hours, others for the duration. Snacks and, if needed, dinner are provided, thanks to the center’s own stash and food donations from the community.

“If someone comes in and is hungry, they get fed,” Stewart said.

While there’s no formal connection between the youth center and Yellow Springs schools, a “working relationship” does exist to make sure that local kids are safe and well-cared-for, according to Mills Lawn guidance counselor John Gudgel.

“Sometimes drama spills over from there to school, or vice versa,” he said.

Kids are supervised at the center, but not so much that they lose “the freedom to be themselves,” he observed.

A Yellow Springs native, Gudgel remembers hanging out at the youth center when it first started in the early 1970s, often playing basketball or shooting pool. The center was then known as the Teen Center, and catered to older kids, while today’s center tends to attract pre-teens.

“It was a very safe place to hang out,” Gudgel said of the building that until 1964 was John Bryan High School, then in the 1990s became the home of Village offices.

The safety factor remains true today — all the more so because the youth center is now down the hall from the headquarters for the Yellow Springs Police Department.

And over the past six months, the YSPD has become more involved with the center than formerly, with several officers and the YSPD’s social worker dropping by most afternoons to help with homework, play games and hang out.

That stepped-up involvement is thanks to YSPD Community Outreach Specialist Florence Randolph, according to Chief Brian Carlson.

“She started a homework program there, and got some of the newer officers involved,” he said.

Randolph said she launched the program as a community policing initiative. She aims not only to help kids with academic work, but also to build relationships between the YSPD and local youth.

“Kids get familiar with the officers, and see them as people,” she said. And as a result, kids may feel safe sharing their problems and concerns with adults who can help and advise them, she added.

Sergeant Naomi Watson and officers Paige Burge, Mariah England and Doug Andrus have been especially active in the youth center.

“I’m here at least twice a week. Sometimes kids come to my office to do homework,” Watson said.

Burge said she enjoys getting to know kids and, through them, reaching out to parents in the community.

“They get comfortable and call you by your first name,” she said of kids at the youth center. “It’s a nice segue into building relationships with parents — that’s been an unexpected pleasant surprise.”

“I just really enjoy hanging out with them,” she said.

The interest and excitement around the officers was evident on a recent afternoon. There was easy banter between the kids and local cops, including lots of teasing.

Fifteen-year-old Nathan Burk recommended to England that she try “sparkly black” nail polish, holding out his own black-painted fingertips.

“It would go with your cop suit,” Burk explained.

As a regular volunteer, Anderson said she is pleased to see more involvement from the YSPD. And she agreed that the kids soak up the attention from local officers — and vice versa.

“When the cops show up, it gets wild,” she said, with a laugh.

As the Village’s social worker, Randolph notices when kids at the center lack food, clothing or school supplies, or are troubled by issues at home or school. And when she does, she quietly intervenes.

“It’s really helpful to talk to kids when they’ve had a bad day or a traumatic event,” she said.

Randolph’s own children spent time at the youth center, and now their children do, too. On a recent afternoon, two of her grandchildren, Sherrod Wheeler and Kyla Randolph, were busy in the game room. Six-year-old Kyla had whooped Sergeant Watson at Foosball, and was closing in on another victory on the air hockey table against her grandmother.

“You’re not trying, Grandma,” she said.

“I am,” Randolph insisted, laughing.

Randolph had just finished a slick game of pool with Burk. Randolph won.

“I was going easy on her,” Burk, a regular at the center, explained.

“I come a lot to play pool,” he added. “I like to hang out with the staff and other kids.”

Asked what she would like villagers to know about John Bryan Youth Center, Stewart replied that Yellow Springs’ free and fun youth center is still here, and still going strong. After operating for about 50 years, it’s become a quiet — OK, noisy — village institution.

“It just works in this town so well,” she said.