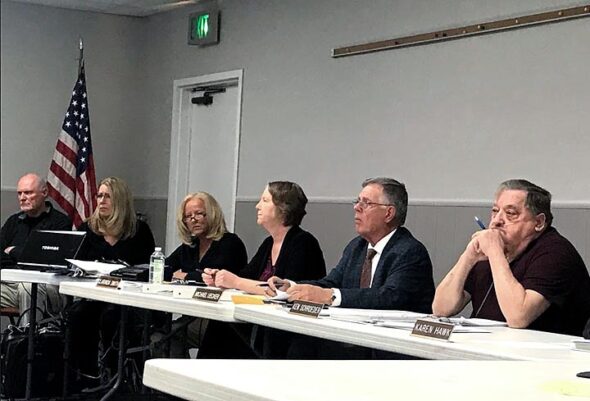 On Feb. 13, the Bath Township Board of Zoning Appeals heard an appeal regarding a cease-and-desist letter against Dovetail Energy, a biodigester on Herr Road four miles west of Yellow Springs. Dovetail has argued that it is an agricultural operation and a public utility, and wants to move forward with building additional storage ponds for its biosolids fertilizer products. The board denied the appeal last week. (Photo by Nora Jaara)

An energy company’s attempts to keep its biodigester operating four miles west of Yellow Springs were shot down by a Bath Township zoning board last week.

In a unanimous decision on March 3, the Bath Township Board of Zoning Appeals, or BZA, upheld a prior township decision that led to a cease-and-desist order issued on the facility last year.

That order came when a special prosecutor and independent zoning inspector found that the biodigester was an industrial, rather than an agricultural use, and in violation of the township zoning code.

Dovetail Energy, which owns the biodigester, will likely appeal the decision, township leaders believe. The biodigester continues to operate during the appeals process.

The biodigester is located on the Herr Road property of Bath Township Trustee Tom Pitstick, who recused himself from recent township decisions involving the company. It turns waste from area food manufacturers, farms and wastewater treatment plants into electricity and fertilizer. The Village of Yellow Springs currently sends its treated sewage sludge there, last year shipping 655,000 gallons to the facility.

The battle over the biodigester has waged for years, with neighbors raising concerns about foul odors, heavy truck traffic and possible groundwater contamination from the facility’s storage pond and the biosolids fertilizer it applies to nearby farms.

Dovetail, a subsidiary of Delaware, Ohio, based Renergy, contends that the biodigester is a more sustainable way to deal with waste than landfills because it produces electricity and kills pathogens during the process. The company claims that its facility, built in 2013, has an agricultural exemption as a public utility.

Tensions rose markedly in 2018 when Dovetail applied for an Ohio EPA permit to significantly expand the facility. In response to public outcry, the company downgraded initial plans to more than double its capacity.

Then, the company sought to add two more open-air storage ponds, which would hold 32 million gallons of treated sewage sludge, far more than their current, five-million gallon pond. The EPA approved those plans in July 2019.  But before construction on the new ponds could begin, the township issued its cease-and-desist order.

Previously, citizen complaints also led to a Greene County Board of Revision decision in 2018 to remove an agricultural tax exemption on the property.

Agricultural or industrial use?

The Bath Township BZA came to its decision on March 3 after three hours of deliberation in executive session. Previously, on Feb. 13, the group held a public hearing on the matter during which they heard testimony from Dovetail. Area residents filled the room, and some spoke.

Jim Miller, the Bath Township zoning inspector, said in a later interview that it is likely the company will file an appeal of the board’s decision in the Greene County Court of Common Pleas.

“There is absolutely no doubt that they will appeal,” Miller said.

Ultimately, it comes down to a zoning issue. According to Miller, for the biodigester to be considered agricultural, at least 50% of its feedstock must come from the farm itself or other land being farmed under common ownership or leasehold.

“Dovetail has failed to meet the 50% requirement,” Miller said. “They were actually utilizing much less.”

The company has previously told the News that about two-thirds of its feedstock is food manufacturing waste, including from Tyson and Kroger.

However, the BZA found those comments irrelevant, and instead chose to stick to the issue of zoning.

“The BZA felt that wasn’t in their purview,” Miller later said.

Also testifying was Pitstick, who sends manure from his hog farm on the property to the biodigester.

In a letter written by Bath Township resident Jake Fulton and read at the hearing by Pam Grayheart, Fulton claimed that residents’ rights were being violated by allowing the facility to operate.

*Jaara is a freelance writer based in Fairborn. She can be reached at norajaara@protonmail.com.

Topics: , biodigester, Board of Zoning Appeals