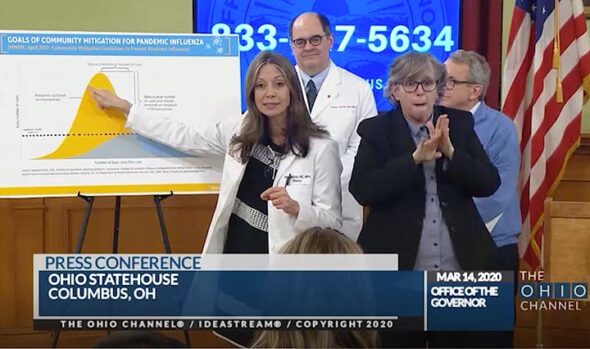 Ohio Health Director Dr. Amy Acton discussed the need to “flatten the curve” on the spread of COVID-19 at a March 14 press briefing on the virus and the state’s response. Gov. Mike DeWine has held daily briefings for over a week, announcing a sweeping series of executive and public health orders affecting primary voting, schools, bars and restaurants, fitness and recreation centers, elective surgeries and more. (Video still from the March 14 press briefing, live-streamed at ohiochannel.org)

It’s already become a ritual: each day at 2 p.m., give or take, Gov. Mike DeWine holds a live-streamed press briefing at the statehouse in Columbus, updating Ohioans on the status of the spread of COVID-19 and the state’s response.

For the first time at the Tuesday, March 17, briefing, DeWine and other Ohio officials were standing six feet apart, following “social distancing” protocols. And members of the press were not physically present in the room, but set up in two different rooms and connected via video link.

Ohio officials and the media were observing a new recommendation from the Trump administration that not more than 10 people gather in one place.

The new configuration was a stark sign of how far-reaching state efforts in Ohio have been to contain the virus’ spread. During his daily briefings over the past week, DeWine and the state health director have issued orders to temporarily close down fundamental aspects of life.

Previous orders had banned visitors to nursing homes, and prohibited all mass gatherings of 100 people or more — amended on Tuesday to 50, following a new recommendation from the U.S. Centers for Disease Control and Prevention.

Ohio also made efforts to mitigate the economic impact of these orders on Ohio businesses and workers, announcing on Sunday that it had expanded unemployment relief for workers who would not otherwise have access to paid leave.

Another measure still being considered is the closure of childcare centers. While not closed as of Tuesday afternoon, DeWine has said several times that the measure will be coming at some point, urging parents who are able to take their children out of daycare to do so.

The Yellow Springs News is providing daily updates on the governor’s press briefings at its website, ysnews.com, beginning with the March 14 briefing.

Ohio Health Director Dr. Amy Acton, a prominent figure at the daily briefings, has called the state’s multi-faceted approach “Swiss cheese,” a layering on of different actions aimed at curtailing the spread of COVID-19 in Ohio. In another widely used analogy, Acton has said repeatedly that the efforts were designed to “flatten the curve,” referring to a chart that models the spread of the coronavirus with and without widespread social interventions. The aim of flattening the curve is to keep infection rates and deaths as low as possible, while preserving the capacity of Ohio’s health care system to treat people critically ill with COVID-19 and other diseases.

At the March 17 press briefing, Acton referenced a just-released report by British scientists that modeled a potential death rate of 2.2 million Americans nationwide if no widespread action were taken to stem the virus’ spread.

Actions like those taken by Ohio and other states would “cut that by half,” Acton said of the death rate.

As of March 17, Ohio has 67 confirmed cases, dating from illness onset of Feb. 7 to March 16, Acton said at the briefing. The age range is 14 to 86 years, with a median age of 48. There are 17 hospitalizations of Ohioans with COVID-19, including people in ICU. No deaths from the virus have been reported in the state.

Though that data still seems modest in a state with a population of 11.7 million, Acton cautioned Ohioans that they should brace for significant spread of the disease — and a challenge to the state’s hospital resources.

“There is no scenario now by which we don’t have a surge,” she said, referring several times to an anticipated “hospital surge” in the state.

In an effort to combat that surge, Mike Abrams, president and CEO of the Ohio Hospital Association, and Dr. Andrew Thomas, chief clinical officer of the Ohio State University’s Wexner Medical Center, announced a new state measure: an order to stop all “elective surgeries” in Ohio.

Thomas explained that the purpose of the order was to allow for more social distancing in hospitals, to conserve personal protective equipment (widely known as PPEs) and to free up both routine and critical care hospital beds.

Ohio Hospital Association’s Abrams stated that Ohio’s hospitals currently stand at 75% capacity, and can “safely surge another 25%” without extraordinary new measures. However, he also outlined potential plans for expanding bed space, including having hospitals take over the wings of nursing homes; redeploying the floors of hotels; and reopening hospitals that have recently closed. These would be options for accommodating patients other than those with infectious disease, he clarified.

According to Acton, Ohio has received $15 million from the federal government for responding to COVID-19 in Ohio. Of that amount, $10 million is being distributed to the state’s 113 local health departments.

In addition, Ohio has received its full allocation of PPEs — items such as gloves, masks and goggles — from the national stockpile. Yet an urgent need for more of these remains, state officials said. Upon being pressed by a reporter, Acton said Ohio had received “a very, very small amount,” citing an unspecified figure in the “hundred thousands, not millions.”

As numbers of confirmed cases continue to climb in Ohio, and likely significantly lag the true spread of the disease, Acton was asked when life in the state would return to normal.

“This is a long haul,” she replied, adding that her earlier predictions that the virus would peak by May were likely outdated, especially as the state takes measures to “flatten the curve” — lowering but lengthening the impact of COVID-19.

One reporter asked if the officials at the podium had been tested for COVID-19. One by one, maintaining the proper social distance, Acton, DeWine and Lt. Gov. Jon Husted stepped forward and said, “No.”