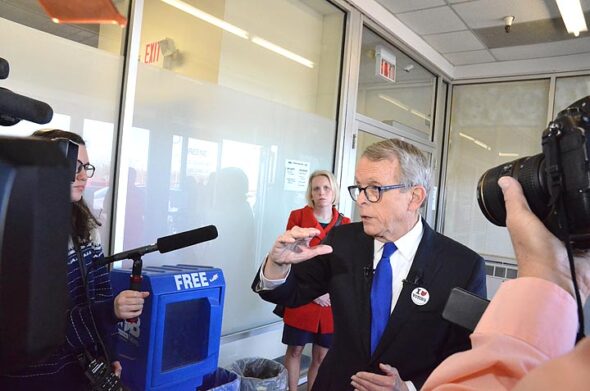 Ohio Gov. Mike DeWine addressed the news media outside of the Greene County Board of Elections on Friday, March 13, demonstrating with hand gestures how the state is hoping to "flatten the curve" of infections. DeWine, who resides in Cedarville, was there to vote early. Behind him is his daughter, Alice DeWine, a candidate in the Republican primary for county prosecutor. (Photo by Megan Bachman)

DeWine on coronavirus: “It’s spreading all throughout the state of Ohio”

On Friday, March 13, after voting early at the Greene County Board of Elections in Xenia, Ohio Gov. Mike DeWine answered questions from area media.

DeWine addressed the state’s response to the growing threat of the COVID-19 virus, which state leaders have said is spreading quickly, and largely undetected, through the state.

“We believe we could have many as 100,000 people who have contracted the virus today in Ohio,” DeWine said.

That figure is far higher than the official state tally of five people as of March 12, and represents about 1% of the state’s population.

Asked by the Yellow Springs News about whether the state would increase its testing rates to determine who has contracted the virus, DeWine said that the state has around 1,000 test kits, which are mainly being used for those who are not only showing some symptoms, but who are actively sick.

DeWine later added that the tests won’t be able to keep up with the number of people contracting the virus.

“The reality is it won’t be too long until there’s so many people who have this that you won’t be able to test them no matter how many testing kits you have,” he said.

“We know there’s a lot of people out there today who are positive and do not know that yet,” he added. “That’s why we had to close the schools, that’s why we had to set the rule in regard to how many people can be congregating together.”

On Thursday, DeWine signed a measure that limits the number of people at gatherings in the state to 100 or less.

DeWine said the state’s recent decisions to close schools for three weeks and limit mass gatherings are to slow the spread of infection through Ohio. The goal, he said, was to “flatten the curve” of infections rather than face a spike in infections, which could overwhelm the healthcare system.

“We know many people in Ohio are going to be infected before this is over. The goal is to slow this down so the medical folks and the doctors and the equipment will handle the influx,” he said.

DeWine urged all citizens to take the threat seriously, and not to jeopardize their health, or the health of others. That includes staying three to six feet away from others and not going out when it can be avoided.The elderly, he said, are particularly at risk, and the death rate “goes up dramatically the older a person gets.” He said more Ohioans are coming to realize the “gravity” of the situation.

“People in Ohio are starting to understand the gravity of this. It’s understandable that it’s been kind of slow understanding it because if you look around people can go about their business — they don’t see any difference,” he said.

“This thing is spreading, it’s spreading all throughout the state of Ohio.”

Finally, DeWine encouraged people to still vote on Tuesday, March 17, or to vote early, and noted some safety precautions at polling locations.

“They have the sanitizer out everywhere,” DeWine said.

However, previously planned strategies to wipe down electronic voting machines between voters were not in place at the Greene County Board of Elections on Friday. Election officials stated that the use of sanitizing wipes on the screens was harming the screens.

For the latest coronavirus updates in Yellow Springs, visit our main page here.

5 Responses to “DeWine on coronavirus: “It’s spreading all throughout the state of Ohio””