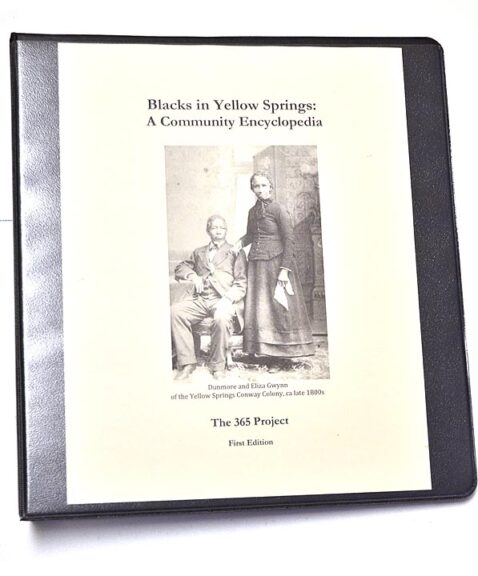 The cover of the newly released “Blacks of Yellow Springs: A Community Encyclopedia” features an historical photograph of Dunmore and Eliza Gwynn. The couple came to Yellow Springs in 1862 as part of the Conway Colony of 20–30 people who had escaped enslavement on the Walker Conway plantation in Fredricksburg Va. A number of local families can trace their lineage back to members of the Conway group.

A “labor of love” — as well as a labor of memory, representation and community — hit a significant milestone in February with the completion and release of the first physical edition of “Blacks in Yellow Springs: A Community Encyclopedia.”

The encyclopedia project, initiated in 2016 under the oversight of The 365 Project, a local nonprofit that promotes racial diversity, understanding and equity, has until now existed as an online resource on the group’s website.

The multiperson effort to bring the encyclopedia into physical form has resulted in a 193-page collection of nearly 100 biographical entries along with separate sections on community organizations and Black-owned businesses, all written by family members, friends or neighbors.

Florence Randolph, the wife of First Baptist’s pastor the Rev. Bill Randolph, opened the gathering with a welcome, describing the event as “an auspicious occasion.”

John Gudgel, president of The 365 Project, was buoyant.

“We did it. It’s done,” he told the crowd, naming the project’s editorial committee of Phyllis Jackson, Joseph E. Lewis, Kevin McGruder, Karen McKee, Isabel Adams Newman and the late William B. Simpson, who died this past December. Between them, the committee represents generations of Black experience in the village.

McGruder, the vice president for academic affairs and an associate professor of history at Antioch College, is credited with initiating the idea to turn a prior 365 brochure on Blacks in Yellow Springs, created by a former Antioch College faculty member and his class, into a broader publication.

McGruder noted that he earned his Ph.D. relatively late in life, but before going into academia he had “been doing history as a hobby.”

That background added to McGruder’s appreciation of the efforts of local amateur historians such as Phyllis Jackson, who has been documenting local Black history for decades and contributed a number of encyclopedia entries.

McGruder described the encyclopedia as an example of “social history.”

Social history, McGruder explained, is “history from the ground up” from the experiences of ordinary people.

And it’s an important resource, he said.

“The lives of everyday people are really important in understanding what happened” in specific places and times.

“That’s the richness of a local history,” he said. “There’s a lot of information … that often gets lost” in more formal histories.

McGruder, who is also treasurer of The 365 Project, added that the richness of Black history and culture in Yellow Springs is part of what influenced him to join Antioch’s faculty in 2012.

“Yellow Springs has a very interesting history,” he said. “There were [specific] places where Blacks lived, but there was never a Black side of the village. … Most Northern cities have that [separation].

Not that segregation didn’t exist within village institutions. There were separate schools for Black and white children, for instance. And the local schools didn’t hire a Black teacher until the 1950s.

Still, the village stands out for its history of Black leadership, McGruder added. “You get that in places with Black majorities,” but not where Black residents are in the minority.

That leadership goes back to the 1800s, McGruder said, noting that Wheeling Gaunt — the 19th-century land owner and philanthropist who bought his own freedom from enslavement — ran for election to the school board in 1867. He didn’t win, but  the fact of his candidacy is noteworthy.

The lives of Gaunt and many other leaders are included in the local encyclopedia. But just as useful to the historical record is the inclusion of secretaries, laborers, store clerks and Sunday school teachers beside scientists, educators, business owners and elected officials.

Dipping randomly into the text reveals biographical entries for:

• Jane Lee Ball (1929–2011), a professor of English at Wilberforce University who published a variety of scholarly articles along with fiction and newspaper articles.

• Myrtile Marie Brown (1902–1995), who after working 50 years as a cook at Antioch College, continued to cater meals and was known for her chicken pot pies. Her community service activities earned her a Black Leadership Award from a local sorority.

• Herman Cordell (1889–1963), who worked for the Pennsylvania Railroad Company for 30 years as a trackman, served as a treasurer and trustee at Central Chapel A.M.E Church and managed a Black softball team in town, among other pursuits.

• J. Elmer Spyglass (1877–1957), considered a vocal prodigy, pursued a classical music career in Europe and eventually worked with the U.S. Consulate in Germany after World War II. He is buried in Glen Forest Cemetery.

Each life tells a unique piece of the story of Yellow Springs — and of the wider world.

But even some of the most prominent people of a certain time may not be widely known today.

“Often individuals or events that are very visible during one era are not known to succeeding eras,” states the encyclopedia’s introduction. “If they are documented at all, those documents are not widely available, and are often in sources such as newspapers or held in the memories of the people who knew of or participated in these events.”

The encyclopedia is meant to address those challenges.

It is also a living document, in that it is meant to grow over time.

To facilitate that growth and the additional entries to come, each encyclopedia copy is set in a three-ring binder with loose-leaf pages for the easy insertion of new pages.

The cover features an historical photograph of Dunmore and Eliza Gwynn, who came to Yellow Springs in 1862 as part of the Conway Colony of 20–30 people who escaped enslavement on the Walker Conway plantation in Fredricksburg, Va.

A number of Black families in town can trace their local histories to the Conway group.

Jean McKee, who has done extensive research on the group and whose family is descended from its members, said the stories are important to remember and tell.

The biographies help people “realize how connected we [are] to that history,” McKee said.

And there are many more biographies to collect, McGruder said, noting that the encyclopedia committee hopes the newly printed document will inspire other people to come forward with their own stories.

“This is really just a beginning,” he said.

The 365 Project plans to have copies for sale at local book stores and through its website. The cost is $15. The encyclopedia also will be available for reading at the Yellow Springs library.