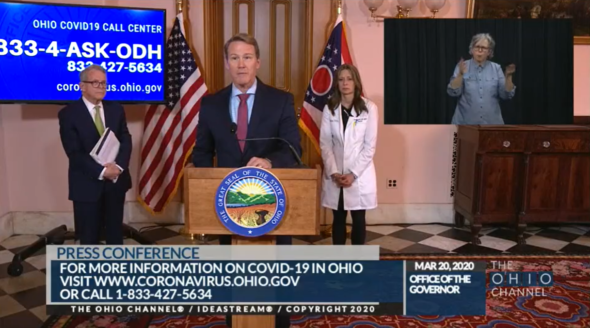 Screenshot from the governor's briefing on March 20

Ohio has suffered its first COVID-19 fatality, Ohio Gov. Mike DeWine shared at the start of his March 20 briefing.

DeWine confirmed that Mark Waggoner, a 76-year-old Lucas County man, died from the disease on Wednesday. DeWine added that he personally knew the deceased, who was a Toledo attorney and a former member of the Republican state central committee and Lucas County Board of Elections.

“Most of the times, we will not know the person. It will be another number,” DeWine observed.

“Each time that we hear a new death, it was a life…. someone who was cherished by the people in their family and in their community,” he added.

Ohio Department of Health Director Amy Acton said news of Ohio’s first death was hard to take, and that it won’t be the last.

“We knew we’d see these deaths. We knew this would happen, but it’s still very hard to take when it happens,” she said. “We will see more.”

State leaders also confirmed several confirmed coronavirus cases at a Troy assisted living facility. According to news reports from March 19, there are nine presumptive cases at the facility.

All senior centers in Ohio will close at the end of the day on Monday, March 23, the governor announced. He added that centers can continue to deliver food to the seniors they serve. DeWine said is prime concern is seniors gathering together in person.

“Our grave concern is about the danger of those seniors being together and the spread of this virus,” he said.

The Yellow Springs Senior Center has already closed, and is delivering food and groceries to local seniors, in partnership with Tom’s Market.

Regarding recent moves in Pennsylvania and California to close all non-essential businesses in the state, the governor said he is currently not taking similar steps in Ohio. He is is also not ruling it out in the future. DeWine said he is trying to “find the right balance” between keeping people safe while allowing businesses to stay open.

“Throughout this crisis, I have tried to balance the safety of the people of the state of Ohio [with] … allowing people to continue making a living and provide for their family, to keep our economy moving,” he said.

However, DeWine said that he would consider the move if Ohio employers continued to not comply with state guidance to keep employees separated and sanitation in workplaces a high priority.

“Sadly I continue to received emails, texts, from employees from people who have observed what’s going on in businesses that are not complying,” DeWine said. Such businesses are “recklessly risking the lives of their employees, their employees families and everyone who those employees come into contact with,” he said.

“The bad behavior, the reckless behavior, must stop,” he added.

Lt. Gov. Jon Hustead shared that the state has requested additional assistance from the federal government in meeting the needs of those recent unemployed here. The federal government could extend unemployment to those who were 1099 employees and currently ineligible, Hustead explained.

In response to a question from a reporter, DeWine said that it is not within his powers to close the state’s borders, but that anyone who has traveled from out-of-state should self-isolate at home. Such powers rest with the federal government, he added.

One Response to “First COVID-19 death in Ohio: Highlights from the governor’s March 20 briefing”