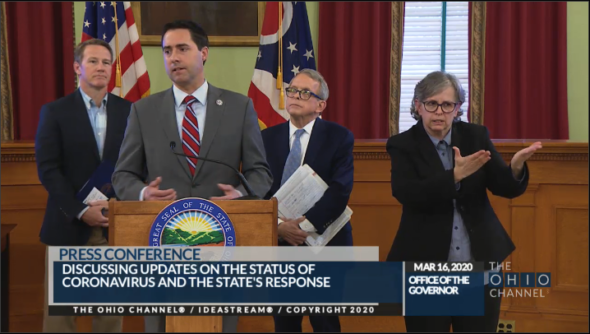 Video still from the March 16 governor's press briefing on COVID-19 in Ohio, live-streamed at ohiochannel.org

UPDATE, 3/16/20, 11:15 P.M.: The Greene County Board of Elections announced via its website: “Directive 2020-06 was issued to all Board of Elections announcing the Director of Health, Dr. Amy Acton’s order closing all polling locations for the March 17, 2020 election. Once the decision is made of when the Ohio Primary will be held, we will forward the information to you.”

The statement from DeWine, sent via email: “During this time when we face an unprecedented public health crisis, to conduct an election tomorrow would force poll workers and voters to place themselves at an unacceptable health risk of contracting coronavirus. As such, Health Director Dr. Amy Acton will order the polls closed as a health emergency. While the polls will be closed tomorrow, Secretary of State Frank LaRose will seek a remedy through the courts to extend voting options so that every voter who wants to vote will be granted that opportunity.”

UPDATE, 3/16/20, 8:30 p.m.: A Franklin County judge blocked the state’s attempt to shift voting to June 2, according to the Columbus Dispatch Monday night. Common Pleas Court Judge Richard Frye said it would be a “terrible precedent” for a judge to stop voting less than 12 hours before polls are scheduled to open, the Dispatch reported. As of Monday night, the Tuesday primary is back on.

Ohio is moving to extend elections to June 2, according to Governor Mike DeWine at today’s press briefing. DeWine is recommending that in-person voting for Ohio’s presidential primary, originally scheduled for Tuesday, March 17, be postponed until June 2. Voting by absentee ballot would be extended until that time. The votes of those who have already cast their ballots will not be tallied until all votes are tabulated in June, DeWine said.

He noted that the executive branch by law does not possess the power to postpone elections except in cases of a military invasion. Instead, DeWine said, a lawsuit is being filed in Common Pleas Court in Franklin County today. The gist of that suit is to delay voting in order to not force people to choose between exercising their Constitutional rights and protecting their health, he said.

“We should not force them to make this choice,” he said, referencing those who are elderly, medically compromised or otherwise concerned about protecting their health by avoiding polling places.

The judge in the case will decide whether to postpone voting along the lines the governor has recommended, according to DeWine.

The move was partly a response to a new CDC caution against mass gatherings of 50 or more. The agency had previously recommended against gatherings of 100 or more, which Ohio previously implemented as a statewide ban.

“It is clear that tomorrow’s in-person voting does not conform and cannot conform” to the new CDC recommendations, DeWine said.

DeWine also referenced the fact that the Trump administration is reportedly recommending gatherings of no more than 10 people.

“We tried to do everything we could to avoid that,” he said.

LaRose cited evolving advice from state and national public health professionals as the reason for the shift in course. Last week, the state had received the advice that voting was safe for voters and poll workers.

Asked why Ohio had waited so long to recommend the voting change, DeWine called the shift “the best of bad alternatives” in response to public health advice that now highlights the risks to older people and those with underlying health conditions of going to the polls in person.

The action also protects the state’s 35,000 poll workers, many of whom are older people, he said.

In response to a question regarding why June 2 was safer than March 17, DeWine replied, “We don’t know.” He added that the date was “as far out as we could push it,” given the need to select delegates for the Democratic National Convention, which takes place in July. The Republican Convention follows in August.

Three other states, Arizona, Florida and Illinois, have primary elections March 17. Those states are not postponing their elections.

These venues were to close by order of Ohio Department of Health as of close-of-business today, March 16.

In contrast to the closure announcements, DeWine emphasized that grocery stores in the state would remain open.

“We’re not closing grocery stores,” he said, discrediting rumors to that effect.

Lt. Gov. Jon Husted echoed the point, assuring Ohioans that they were “going to have access to the essentials of life.”

Ohio now has 50 confirmed cases of COVID-19, a rise from the 37 cases reported Sunday. There are now 12 Ohio counties with cases, including three confirmed cases in Franklin County and six in Butler County. Ohio has 88 counties; no cases have been reported in Greene County or contiguous counties.

Ohio Department of Health Director Dr. Amy Acton noted that the state had its first confirmed case just a week ago, on March 9.

She reiterated that the state tallies are “the tip of the iceberg” of those who have or will contract the illness.

“We’re on the upslope. How high the slope will be will vary a lot based on what we do,” Acton said, referring to the spread of the disease. In response to a question, she said it was impossible to know except in retrospect how high the slope would go.

She highlighted the greater risk to those 65 and older, saying that early studies show a fatality rate of 15 times greater than seen in younger people. She urged seniors to stay home if at all possible.

“If it is nonessential, you should not be doing it,” she said, referring to errands that take people out of their homes.

Acton said the state was prioritizing the use of testing kits, which remain limited in number, to high-risk individuals and healthcare workers with symptoms of the virus.

She also indicated that she would be talking in more detail tomorrow about the state’s supply of medical items such as respirators and ventilators, used in treating people with serious symptoms of COVID-19. She urged those with extra supplies of protective gear such as latex gloves, face masks and goggles to bring them to their county’s Emergency Management Association.