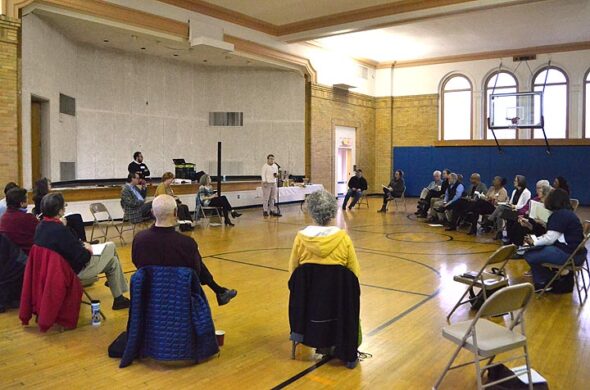 About 30 Village leaders met Friday morning, March 13, at the Bryan Center gym to discuss and coordinate local responses to the evolving COVID-19 situation in Ohio.

Village Council member Lisa Kreeger said the meeting aimed to “identify the gaps” in local services, especially those impacting young people and elders. The group will continue to meet daily in the coming weeks, but will so via conference call or virtual means.

Yellow Springs Superintendent Terri Holden confirmed that March 13 was the last school day for local students prior to a three-week statewide school closure announced Thursday by Gov. Mike DeWine. The last day for school staff is Monday, March 16. Parents can come to the school to ask questions and pick up medications for their children. As of right now, schools are expected to reopen April 6, but that date is subject to change by the state.

“I’ll wait to see if we’ll be back April 6,” Holden said, adding that the district presently does not intend to extend the school year.

Responding to concerns from those gathered, Holden said that Yellow Springs schools were working to make meals available during the closure to local students who rely on free and reduced lunch programs. About 200 local students, or up to 38% of the Yellow Springs student body, are enrolled in these programs, she said. Details are being communicated to district families. Meal pick-up could be offered at the high school or by some other means, Holden said.

Connected to school closings, several of those at the meeting voiced concern for local families struggling to make childcare plans. Local healthcare providers and business leaders echoed those concerns regarding employees who would need to take time off or make other arrangements for childcare.

Speaking about protecting the village’s older population, Yellow Springs Senior Center Executive Director Karen Wolford noted that the facility is being closed to activities and meetings for three weeks. Employees will continue to work on site and will be available to meet with individuals one-on-one, she said. The senior center’s transportation program will continue, limited to routine medical appointments and grocery store trips.

“Some of them may not have access to food,” she said.

The senior center is looking to activate Meals-to-Wheels to temporarily replace its congregate-style meals typically provided twice weekly at the center. Center staff are seeking freezer space for storing meals, as well as drivers to help deliver food to local seniors.

Wolford further spoke about her concerns regarding seniors and social isolation. Isolation is a “further risk to their health,” she said, encouraging people to check in with seniors by phone or other virtual means. Yellow Springs Senior Center is looking into setting up a telephone reassurance program using its existing one-call system, she added.

“It’s really about reassurance,” she said of the need for seniors to stay in contact with friends, neighbors and family.

Friends Care Community’s Montgomery said that the nursing facility had stepped up its infection control, and was cleaning “times 20 now.” He also confirmed that Friends Care had halted all nonessential personnel, including families and volunteers, from visiting the center. It is working with families to facility virtual visits, he added.

All said it was “business as usual” at their respective agencies, with contingency plans in place for any potential declines in staffing levels due to illness and quarantine. Chief Carlson said that the Yellow Springs Police Department was continuing to respond to all calls, with priority given to more serious calls, and Chief Altman noted that area fire departments were sharing resources, so equipment and staff from other agencies might be used to respond to Yellow Springs calls.

Officers and firefighters are wearing gloves and masks and in some cases goggles, the chiefs of both agencies clarified.

Echoing his comments from Village Council’s emergency meeting Thursday evening, March 12, Salmerón said the Village had developed contingency plans for possible temporary decreases in staffing levels, and was confident it could continue to deliver utilities and other services to local residents.

Yellow Springs Chamber of Commerce Executive Director Karen Wintrow spoke briefly about the impact of coronavirus on local businesses. Cancelations and fewer shoppers could affect “the future and security” of businesses in the village, she said, adding that the chamber is seeking to help retailers sell online if possible and find ways to keep workers employed.

All who spoke emphasized that the situation with the state and local response to the virus was extremely fluid, with many more changes and announcements expected.

Attendee Don Hollister expressed the hope that despite the challenges of the situation, “a resurgence of community feeling” could result.

As of Friday afternoon, Ohio reported 13 confirmed cases of coronavirus in Ohio, with 159 persons under investigation. There are currently zero cases reported in Greene County. The number of confirmed cases has more than doubled since Thursday’s tally.

In response to a question from the News at Friday’s meeting, Emergency Response Planner Sheryl Wynn of Greene County Public Health clarified that the state department of health, not the county health agency, would be the source of any information regarding possible cases of coronavirus in Greene County.

Wynn recommended that local residents consult the Ohio Department of Health’s dedicated coronavirus website, or the U.S. Centers for Disease Control and Prevention for accurate, updated information on the disease.

Wynn also noted that flu season runs October through May, typically peaking in April. But it is not known how this particular virus will act, she emphasized.

“Hopefully our proactive stance will prevent the spread of disease in our communities,” she said.

Council member Lisa Kreeger, a nurse and nurse educator, said she believed it was imperative for Ohio and Yellow Springs to “be proactive and be smart.” While zero cases of the virus have been reported in Greene County or Yellow Springs, Kreeger expressed concern about protecting Yellow Springs’ senior population.

“I’m concerned in Yellow Springs because we have a lot of seniors,” she said.

While people shouldn’t panic or overreact, the spread of the virus “does require behavior change,” she said, citing social distancing, hand washing and refraining from touching one’s face as key protective measures.

Council Vice President Marianne MacQueen stressed the role of local government in responding to the situation and protecting local communities.

“It has to be at the local level,” she said.

Village Manager Salmerón reassured Council and local residents that the Village would be able to continue to deliver services, and had contingency plans in place for possible temporary staffing declines due to illness and quarantine. Salmerón also summarized the key information from Gov. DeWine’s Thursday press conference, including the state’s restrictions on mass gatherings of 100 or more, and its closure of schools across Ohio for the next three weeks.

Kreeger said she was thinking about the economic impact to local businesses, and wanted Council and other groups to explore ways to support businesses through the pandemic and beyond.

Wintrow stressed that the chamber was seeking to do what it could to “keep businesses and sales going,” while also balancing economic activity with the need to keep residents and visitors safe.

Local resident Kelly Ann Tracy expressed the view that the situation offered a chance for “the village to come together,” and urged local residents to reach out to elders who live alone.

Council also discussed plans for using technology to facilitate public meetings, if state law and emerging conditions supported making that shift. Members unanimously passed a resolution authorizing “the use of technology to hold essential meetings” during Ohio’s declared state of emergency, which began on Monday.

Council President Brian Housh called the resolution proactive, noting that Village Solicitor Chris Conard “is stilling trying to determine if we can legally do this,” referring to holding public meetings virtually rather than in person. Ohio Sunshine Laws regulating public meetings require that they be held in person and follow other mandated transparency requirements.

Subsequently, on Friday afternoon, Ohio Attorney General David Yost released a letter offering guidance to local officials regarding using technology to hold public meetings during the state’s emergency period, as a measure to protect public health. Technology-enabled meetings of local governmental bodies could be permissible in Ohio on a temporary basis provided “the public is able to hear the discussions and deliberations of all the members,” the letter notes in part.

Yost’s letter also urges local lawmakers not to make major decisions during this emergency period. “Now is not the time to rely on this guidance in order to enact legislation unrelated to the instant emergency that is better reserved for the normal operations of government (e.g. to pass a new tax or enact a new regulatory scheme),” the letter reads.

Council member Laura Curliss made a similar point at the Thursday meeting, stating her view that important Council business should be deferred if possible to a later date to ensure full public participation.

“I would ask that decisions that we make if they can be put off a month or two months, they do be put off,” Curliss said.

As of Friday afternoon, Council plans to meet in person for its next regularly scheduled meeting, Monday, March 16, at 7 p.m. in Council chambers.