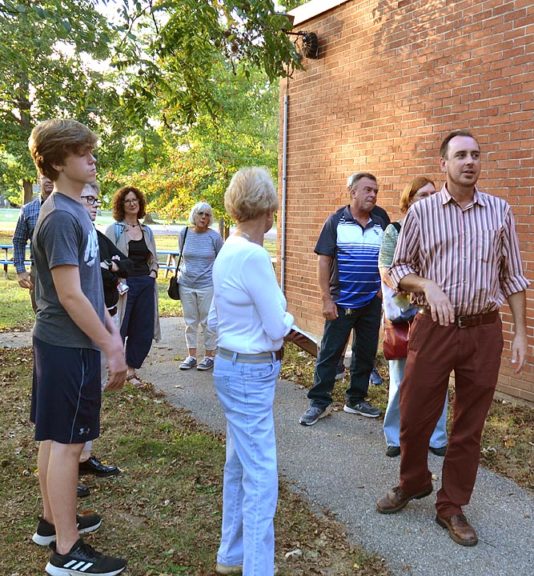 Those were some of the public feedback comments given to the Yellow Springs school board at the board’s last regular meeting, as members of the district’s Facilities Task Force presented the group’s final report and concluded a year’s work exploring the needs of the district’s school buildings.

Task force facilitator Mel Marsh, of  Springfield-based Acorn Consulting, noted that a full year had passed since she was hired and subsequently came to the board in February 2019 to  seek guidance about board members’ expectations for the newly formed group, which was put together by former Superintendent Mario Basora after voters rejected a previous facilities plan in 2018.

In response to the board’s reluctance to give direction to the group’s work, the task force eventually focused its efforts on identifying and prioritizing the buildings’ needs.

“We did do as much as possible in staying in the real world,” Marsh told the board last month.

The group’s final seven-page report followed a public presentation of its findings in December (covered in a prior News article) and a series of smaller community meetings since then. The feedback from those meetings was included in the final written report as well. The work cost close to $30,000.

The group, however, modified its second recommendation, which involved the district’s approach to addressing the task force’s list of prioritized needs. In December, the group suggested a phased approach to making improvements.

In its final report, however, the task force stepped back from recommending how the district should approach the upgrades, though several members individually said they hope the board explores a range of possibilities and their associated costs.

Those high-priority items include replacing the modular classrooms on both campuses as well as improving overall security and upgrading the building envelop (outside walls and doors, roof and windows); plumbing, electric, heating and cooling systems; and the kitchens and cafeterias.

Task force members also suggested that the district work harder at educating the public about the identified needs, the possible options for addressing those needs and the relevant costs, several citing their own change in opinions over time as they learned more about the current condition of the local schools.

Marsh noted that the board now has a group of “ambassadors” among the task force members who can talk about facilities with the community.

While task force members generally expressed support for the the board’s role in deciding the district’s next steps, several members cautioned against appearing to ignore the group’s recommendations and community feedback.

“I ask that the board carefully consider that it will have an uphill battle with the community to propose a radically different solution to what the task force recommended,” Chris Hamilton stated.

Specific to the district’s recently renewed conversations about the feasibility of a K–12 facility, Hamilton continued, “It can be done and cost may be the biggest driver, but you will have to clearly lay out the business case for a new K–12 school that will persuade the community.”

Board member TJ Turner, who also served on the task force as the board liaison, thanked the group members for their work.

“The very first step is getting these problems identified,” Turner said.

Board President Steve Conn echoed the thanks, noting that the board’s “logistical” role moving forward will be to “vote on recommendations that come from the superintendent.”

“Ultimately,” he added, “this is a village decision.”

Superintendent Terri Holden asserted that she has no recommendation at this time. “There is no plan,” she said.

“This is the critical first step, and as these folks know, it took a long time to get here” she added of the task force.

Task force members included community members who were against as well as for the previous facilities plan and accompanying levy proposal. The group consisted of parents, grandparents, a teacher, a school counselor and former administrator, two students, the district superintendent, a school board member and the architect who worked with the district on the previous plan.

That architect, Mike Ruetschle, was paid $4,875 for his time attending task force meetings, according to district Interim Treasurer Tammy Emrick. Facilitator Marsh was paid $24,600 for her services.

In other recent school board business—

The board heard a report about the district’s partnership with Wittenberg University to identify, mentor and train college students of color interested in becoming teachers.

The program, called the Teacher Pipeline Initiative, is supported by a grant from the Ohio Department of Education. It recognizes and seeks to address the decreasing number of people of color entering the teaching field.

Wittenberg education faculty member Brian Yontz told the board that after an initial application process, four candidates were selected last year: two identifying as African American and two identifying as Latina. Three were first-year students and one was a transfer junior.

Following a kickoff dinner last fall with the candidates, mentors and school and university administrators, three college students began mentoring and shadowing Yellow Springs teachers in January, with the expectation they will continue into May.

Mills Lawn counselor and former high/middle school Principal John Gudgel, who is the district’s Pipeline coordinator, said the program is invaluable for the teacher candidates and local students.

“One of the ah-ha moments as an older Black male,” Gudgel said, was standing in a classroom with Mabra, Simms and teacher candidate Erykah Andrews — four teachers of color in the same room.

“Will this every happen again?” was the unspoken question, he said. The children didn’t notice anything unusual, and that’s the goal: teachers of color shouldn’t be an unusual occurrence.

The educators noted that studies show children of all races benefit in their studies and personal growth when they have teachers from diverse backgrounds.

The superintendent shared the latest semi-annual bullying report with the board, as required by state law.

The board’s next regular meeting is scheduled Thursday, March 12, at 7 p.m., in the John Graham Meeting Room at Mills Lawn.