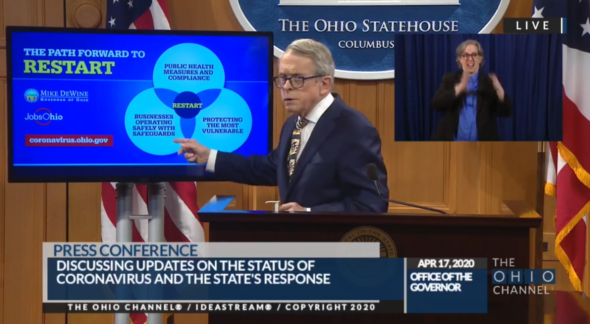 Gov. Mike DeWine said today that Ohio's plan for reopening its economy will combine public health measures, safe business practices and protection for the most vulnerable.

Amid 693 case rise, path to reopen Ohio ‘by Ohioans, for Ohioans’

Ohio is working on a “path to restart” that combines public health measures, protecting the most vulnerable and having businesses operate with safeguards, Ohio Gov. Mike DeWine said at his daily briefing on Friday, April 17.

He provided few new details after announcing yesterday that Ohio would begin a process of reopening on May 1.

The state’s plan will be tailored to Ohio’s needs, he stressed, calling it “by Ohioans, for Ohioans.” At the same time, the state is collaborating with other Midwestern states.

“Ultimately, every state has got to fashion a plan for the people of that state,” he said.

The guidelines came after days of the president arguing with governors about the speed of the restart and the governors’ authority to set a plan for their own states.

In response to a question, DeWine said Ohio’s approach would be “in the spirit of” the federal guidelines.

One hurdle to reopening Ohio is testing availability. Widespread testing, quarantining of those who are sick and rapid contact tracing are needed to prevent a second outbreak of the virus, according to Ohio Health Director Dr. Amy Acton.

“I’d love to have more testing,” she said.

With 77,000 Ohioans tested so far and 693 new cases recorded in the past 24 hours for a total probable case count of 9,107, testing remains limited in the state.

In response to a question about how the state can ramp up testing, Acton said that testing is being rationed on the federal level, specifically in regards to the reagent used to test for the novel coronavirus.

Ohio has “made every part of this testing we can make ourselves,” Acton said, but the reagent has to be obtained from the federal government.

Greene County did not record any new cases in the past 24 hours, with confirmed cases remaining at 33 since March 21. However, a second person died from the illness. No details about the individual are currently available. Hospitalizations remained the same at nine.

Ohio now has a total of 9,107 probable cases, a rise of 693 statewide in the past 24 hours. Acton attributed the rise to increased testing. There have been 418 total deaths in Ohio, with 29 new deaths in the past day.

A total of 2,424 people have been hospitalized for the illness, including 740 in the ICU. With 93 new hospitalizations in the past 24 hours, Ohio’s hospitalization rate has remained about steady over the past five days.

Also at today’s briefing, Gov. DeWine announced that he is denying commutations for 84 state prisoners and granting seven. One of the commutations is of Tom Noe, a central figure in one of Ohio’s biggest public corruption cases.

Several state prisons have seen outbreaks of COVID-19. Widespread testing recently done in one prison dorm revealed that 152 prisoners tested positive for COVID-19, with 60 lacking any symptoms of the illness.

The high rate of asymptomatic people is one reason that Ohioans should take an abundance of caution, Acton said.

“Assume everyone you meet is carrying the virus,” she said.

No briefings are scheduled for Saturday or Sunday, a first since the governor’s daily briefings began on March 9. 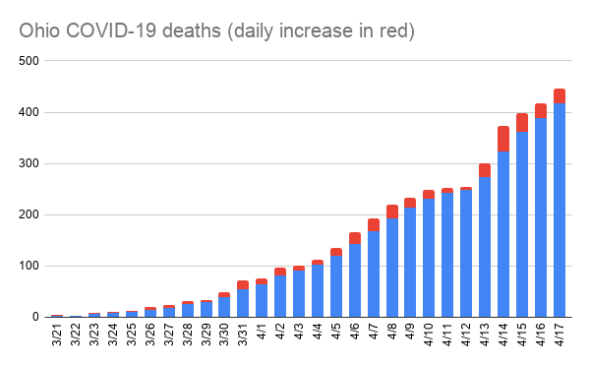