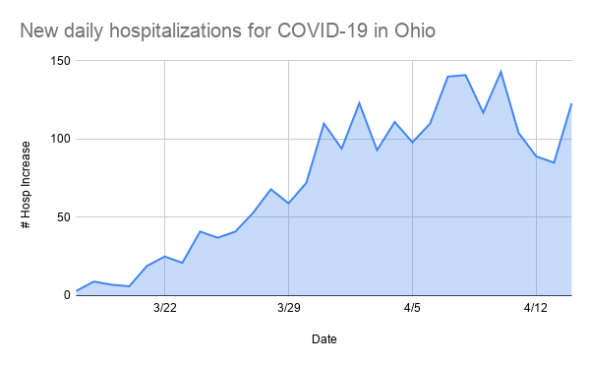 Face masks in use for at least a year. An “army” of amateur epidemiologists mobilized to trace cases. Widespread and rapid testing to see who has — and who had — COVID-19.

Those are a few aspects of the State of Ohio’s plan to start opening up businesses and schools following the coronavirus pandemic. The ideas were previewed at the Monday, April 13, press briefing by Ohio Gov. Mike DeWine. The full plan will be released over the coming weeks, state officials said.

DeWine said life will be different until a vaccine against the coronavirus is available, which he said may take an estimated 12 to 18 months.

“We’re not going to flip on a switch someday and the world goes back to where it was,” DeWine said. “Things will be different [until we have a vaccine.]”

Addressing the use of cloth face masks, which the U.S. Centers for Disease Control and the Ohio Department of Health have recommended, Health Director Amy Acton said they are “yet another weapon to get back to normalcy.”

“We are going to be looking at a year of using these in new ways,” she said. “Keep making them. This is something we are all going to get used to.”

An increase in the availability of testing for COVID-19, and for the antibodies created when someone recovers from the disease, will also be needed for the state to reopen, officials said. Addressing a reporter’s question on whether testing capacity has improved, DeWine said, “we’re closer, yes, but we’re not there yet,” adding that Ohio’s struggles are similar to those in other states.

DeWine also addressed antibody testing, which would help determine who is safe to return to work after recovering from the illness.

“Antibody testing is certainly one piece of the puzzle to starting back,” DeWine added.

Acton detailed a plan to isolate and track confirmed COVID-19 cases using an alternative workforce involving amateur epidemiologists and “mobile units of testers” who can be deployed to hot spots around the state for rapid testing. She also said last week the state plans to sample 1,000 Ohioans to see if they are carrying the coronavirus, even if they are not showing symptoms of COVID-19. That would give state officials a better sense of how much the virus has spread, using epidemiological data, not models.

“On the ground, with detective work, we will know where we are with this virus,” she said.

When will Ohio reach its peak of the coronavirus infection?

Recent data from the Ohio Department of Health shows that new cases, hospitalizations and ICU admissions are all slowing in Ohio. According to various models, Ohio either reached its peak of new daily cases last week, or would do so by this Sunday, April 19.

The Ohio Department of Health reported 7,280 confirmed COVID-19 cases in the state as of Tuesday, April 14, a daily increase of 305 cases. Although the number of cases continues to grow, the rate of increase is slowing. The largest number of new cases seen on April 4, with 427 new cases.

New daily deaths spiked to 50 between Monday, April 13, and Tuesday, April 14. That was the highest daily increase in deaths in the state, and brings the statewide total since the start of the pandemic to 324. Gov. DeWine said the increase was likely due to the lag in time between hospitalization and death.

“Deaths, tragically, are lagging,” DeWine said. He added that “the thing to focus on is the hospital admissions.”

“We’re seeing a flattening of that curve with regards to hospitalizations,” he said.

According to an Ohio State University forecast model, the state is projecting a daily peak of 1,607 new cases for Sunday, April 19. Those figures were revised down from estimates of 8,000 to 10,000 a few weeks earlier, figures that included assumptions about the impact of social distancing measures. The state’s initial forecast was for 62,000 new cases daily on March 22 if no action was taken to stem the spread of the virus.

A 95-year-old woman from Jamestown died in care at Hospice of Dayton. The woman was not a confirmed case of COVID-19, but designated as a “probable” case, according to health department spokesperson Laurie Fox on Tuesday. Previously, the health department reported that an 87-year-old Cedarville woman with COVID-19 died on March 26.

As of Tuesday, there were 32 confirmed cases of COVID-19 in the county, leading to nine hospitalizations.