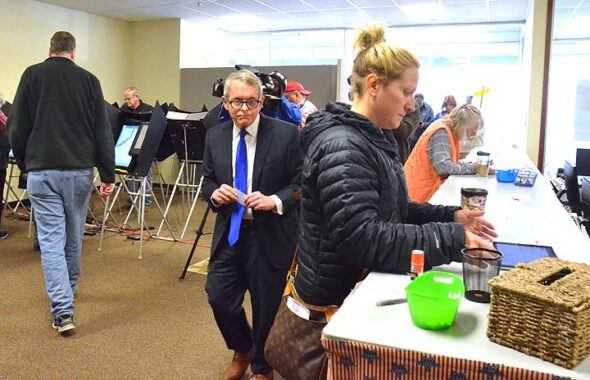 Ohio Gov. Mike DeWine voted early at the Greene County Board of Elections in Xenia on Friday, March 13, before deciding to take steps to cancel the primary election the following Monday. DeWine cited the risk to voters and poll workers from holding the election as usual. DeWine voted here as a resident of Cedarville Township. (Photo by Megan Bachman)

As the deadline for voting in Ohio’s 2020 primary election nears, Greene County voters are reporting worrisome waits in receiving their requested absentee ballots as well as confusion around sometimes contradictory instructions.

Absentee voting is the only way the majority of registered Ohio voters who planned to participate in the originally scheduled March 17 election can cast a ballot in the spring primary, after the state closed polling places in response to the COVID-19 pandemic. The only exception is for disabled voters, who can cast their ballots in person at their county board of election on Tuesday, April 28.

Ohio Gov. Mike DeWine and Attorney General Frank LaRosa originally requested that the March 17 poll date be postponed for all voters to June 2, but the state Legislature instead set the deadline as April 28, with all mailed absentee ballots requiring a postmark of April 27 or before.

As of this writing, the deadline for postmarked ballots remains April 27, while ballots dropped off in a designated box outside the Greene County Board of Elections office on Ledbetter Road in Xenia will be accepted until 7:30 p.m. April 28.

But even if postmarked on time, ballots must also arrive at the board office by Thursday, May 8, to be counted, according to Llyn McCoy, director of the county elections board.

The vote count is scheduled to begin the evening of April 28 and conclude May 8, according to the Ohio Secretary of State’s office. Early voting ballots cast before March 17 will be counted as well. According to McCoy, all votes are being kept “under double lock and key in the board office.”

Relatedly, the deadline for requesting an absentee ballot is noon Saturday, April 25. But given the number of days — up to two weeks — that some Greene County voters have waited this month between mailing in their request and getting a ballot in return, the April 25 request deadline appears inadequate to meet the voting postmark deadline two days later.

“It illustrates what’s wrong with the scheme that the Legislature decided to go with,” locally based attorney Ellis Jacobs said this week. “It doesn’t allow enough time,” he said.

Others share Jacobs’ view. The ACLU filed a lawsuit March 30 on behalf of the League of Women Voters, the A. Philip Randolph Institute and several individual voters in an effort to extend the deadline, stating that the new process is too cumbersome for the time allowed. A federal judge, however, rejected the suit Friday, April 3.

In a followup statement, the plaintiffs said they feared the judge’s ruling would disenfranchise “thousands of voters” in the state. “Voters of color, low-income voters, voters with disabilities and students are all disproportionately at risk,” the statement said.

Some voters have contacted the News and posted on social media about delays in receiving their requested ballots.

Kevin Sweere, who lives in Beavercreek, contacted the News earlier this month to report that he and his wife had mailed their separate absentee request forms — his Republican and hers Democratic — in the same envelope. But while his ballot came within a couple of days, she had yet to receive hers four days after his had arrived.

Her ballot finally showed up in the couple’s mailbox on Monday, April 13, a total of 11 days after his, Sweere said this week.

“It appears they were just overwhelmed [by the number of requests] … not malfeasance,” according to Sweere.

Other area voters who had been feeling increasingly nervous about getting their ballots are reporting having received theirs this week as well, many waiting about two weeks.

The local elections board reported mailing out a large batch of ballots on Friday, April 10, and then another on the following Monday.

“It appears to me that the Board of Elections is working hard and doing the best they can,” Jacobs said Tuesday afternoon.

According to the elections board, the delay was a consequence of the temporary shutdown of the office in mid-March combined with a shortage of absentee ballots after the unanticipated closing of the polls and the subsequent month-long extension of the absentee-voting period. While the elections board office remains closed to the public, employees are processing ballot requests as quickly as they can, according to McCoy.

Voters who want to check on the progress of their request can go online to http://www.sos.state.oh.us/elections/voters/toolkit/ballot-tracking/. The site shows the dates the request was received and processed and the ballot mailed.

Complicating the process further, however, has been instructions in the cover letter of some Greene County ballots that incorrectly lists the filing deadline as April 22 (rather than April 27).

According to Joy Hattan-Ehlerding, whose signature is at the bottom of the instructions and listed as “absentee coordinator,” the letter was composed and printed “before we got the final directive from the state.” In a phone call Tuesday, she said the elections board opted not to print a new letter with the correct date in order to save money.

Villager Moira Laughlin got a similar explanation after emailing the board to question the discrepancy in dates. She says she found the answer “less than satisfactory.”

“As if saving paper is an acceptable excuse for possibly causing people to lose their right to vote,” she wrote in a group email to several villagers concerned about the election. “Because the word was coming directly from the Board of Elections, potential voters might assume they had missed the window and not send in their ballot,” she wrote.

The early letter contained two other errors as well: while the postage amount is listed as 70 cents, it is actually prepaid and so no cost to the voter; also hand delivery of a ballot is not limited to the voter at certain hours of the day and can be made by any trusted person at any time to the designated box outside the elections board office, 551 Ledbetter Road, until the cut off at 7:30 p.m., April 28.

Also causing concerns for Democratic voters was a recent unsolicited mailing, apparently from a Republican-affiliated super pac, with an apparent absentee ballot request form on which the line asking for party affiliation was already filled in as Republican.

Whether the action is illegal is unclear, according to attorney Jacobs.

“But it’s certainly problematic,” he said, noting that the line determines what primary ballot the voter receives.

Despite the issues, McCoy, of the Greene County elections board, said the board is committed to serving voters.

“Greene County voters may rest assured that the board of elections will continue to administer the primary election in a safe, secure and transparent environment,” she wrote in an email to the News.