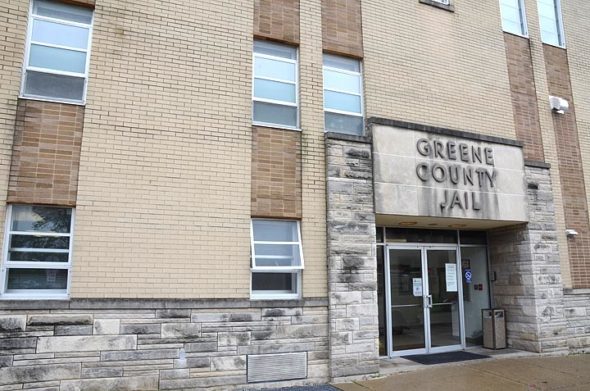 In the extended March 17 primary election, Greene County voters will decide the fate of Issue 12, a proposal to raise the sales tax to build a new and larger county jail. Greene County Jail in downtown Xenia, pictured here, is one of two jails that would be replaced. (News archive photo by Megan Bachman)

NOTE: This editorial originally ran in the March 12 issue of the News, ahead of the scheduled March 17 primary. It is posted here to offer one perspective on Greene County Issue 12 as voters in the extended primary weigh their votes and cast their ballots by April 28. A reminder: absentee ballots must be requested by April 25, and ballots must be postmarked by April 27. Read a previous report in the News about the new voting process here.

Greene County voters face a choice on March 17. Should the county increase the sales tax to fund construction of a new and larger jail?

There’s no doubt that the downtown Xenia jail needs to be replaced. Touring it last spring, I was shocked and dismayed by jail conditions. Metal bars. Harsh lighting. Isolation cells used interchangeably for punishment and for those in mental health crisis. Mid-afternoon on the day I was there, many inmates were in bed.

Some of these conditions are fixable with a new building. But the deep fixes will only come with a shift in mindset and priorities. The shift in mindset involves a systemwide commitment to keeping as many people as possible out of jail — recognizing that even the newest and best jail is a poor substitute for intact families, undisrupted employment and community support. The shift in priorities involves where we put our dollars: into mental health and addiction treatment, education, job training, community-building and more.

That’s a tall order. But $70 million is a lot of money. And $70 million is how much Greene County is looking to raise with Issue 12, a 12-year, 0.25% sales tax increase earmarked for the building of a new jail.

All that money poured into the foundation, the walls, the doors and the systems designed to keep people confined.

And poured into a jail that is scoped to allow more people than ever to be confined. The new jail, which would replace and combine the county’s two existing adult jails and house a new sheriff’s office, is no more than a concept with a price tag attached. Another part of the concept proposes to renovate the medium-security jail for possible future use as a drug treatment center. Few other details have been publicly outlined. Yet we do know that the new jail is slated to contain 500 beds, a 30% increase in the county’s total bed count.

That expansion — a seemingly modest 118 new beds — is the reason that, after nearly a year of reporting on the issue, I stand opposed to the new jail.

Why worry about 118 more beds? Why worry that the existing 4,500 people per year who spend anywhere from one night to 18 months or more in our county jail could rise, and rise, and rise?

More jail beds mean more incarceration. Studies around the county have proved this. The county’s own consultants hired to assess our local jail needs sounded the following caution in writing last spring: “Of concern is, if the County builds a new jail, will stakeholders be less vigilant in managing the jail population. This has been seen in other counties after jails with larger capacity are built.” (The full jail needs assessment is available for download here.)

The number of people confined in urban jails has declined in recent years. But in rural areas like Greene County, jail populations have increased by almost a third since 2013, according to data from the Vera Institute, a criminal justice reform nonprofit. Researchers there call what’s happening a “quiet jail boom.”

The quiet jail boom is a building boom, not a crime boom. As beds are built, beds are filled. According to another Vera report, “Of the 216 county jails constructed between 1999 and 2005 — a time of declining crime rates — the median jail population rose 27% after construction was completed.”

Mass incarceration is happening incrementally, 100 and 200 beds at a time. Greene County’s jail plan is part of this trend. Counties all around us are likewise contemplating or building new jails. Many have hired consultants — even the same consultants our county hired. Many are seeking sales tax increases to pay for the new jails. And all are planning, like us, to build bigger.

In Greene County, there’s another reason to worry about more jail beds. Publicly and privately, the sheriff’s office has championed a 500-bed jail, overriding the county’s own consultants, Omaha-based HDR, and the judgment of at least one county commissioner. Documents recently obtained through a local citizen’s public records request show that jail officials pushed back hard against the consultants’ jail population projection, which called for a more modest increase to 420 beds.

“The purpose of this memo is to have you reconsider your analysis of the bed space demands,” Greene County Jail Administrator Major Kirk Keller wrote in a late 2018 memo to HDR. Another part of the memo reads, “I want to stress that the sheriff’s model of transformational corrections does not work if people don’t begin that journey in jail.”

HDR’s response expresses puzzlement over the “transformational corrections” model. “Through all of our conversations with multiple stakeholders, I did not realize that the Sheriff’s Office had a formal model or policy in place for ‘Transformational Corrections,’” the response reads.

An email from HDR to the county about Keller’s memo summarizes the gist of the exchange. “I think the main takeaway is that Major Keller believes they need a 500-bed jail. I propose that we include 500-bed jail as an option for consideration. If the criminal justice stakeholders abandon all the initiatives they have in place, a higher capacity jail will likely be needed,” the email states.

The county chose the option it pushed — the 500-bed jail.

Greene County Sheriff Gene Fischer has stated publicly that the county doesn’t intend to fill the new and larger jail. But I don’t feel reassured. Responding to Keller’s memo, HDR asks, “[W]ho are the types of offenders currently not being incarcerated who should be in your opinion?” A notation in red follows. “Those with minor theft offenses, known drug addiction, etc.”

I’m not willing to spend $70 million to lock up vulnerable and non-dangerous members of our community. In fact, I’m deeply opposed to it. And so I’m voting “no” on Issue 12.