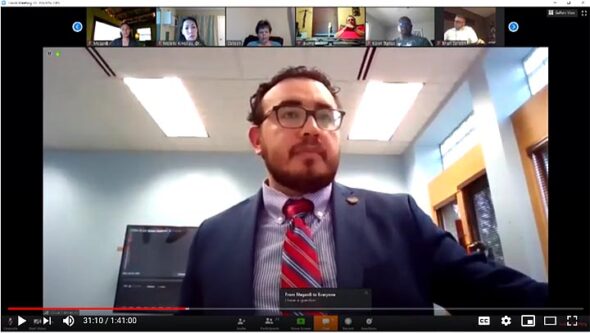 At the end of March, the Ohio Legislature amended sections of Ohio’s Open Meetings Act, which requires public bodies to “conduct all public business in open meetings that the public may attend and observe.” The changes temporarily allow public bodies to convene using electronic technology such as teleconference or videoconference, and expire after the state of emergency is lifted, but not past Dec. 1, 2020.

“Council is actively practicing social distancing along with the governor’s orders,” Housh said at the meeting’s start. “We want to make sure we’re doing all that we can to save lives,” he added.

Council continued to field questions and take citizens’ comments during the meeting by monitoring a YouTube live feed and a Zoom chat stream and checking for questions via email or phone.

Much of the hour-long meeting was taken up with a discussion about the pros and cons of declaring a state of emergency in Yellow Springs.

According to Village Solicitor Chris Conard, local police already have the authority to take action to enforce the Ohio governor’s orders to limit gatherings of 10 or more. In addition, there is nothing in the Village Charter that gives local police or other government agencies more powers when an emergency is declared.

“The exercise of police powers during a state of emergency isn’t much different than in ordinary times,” Conard said. “The police are given broad discretion.”

However, declaring an emergency might put the Village in a better position to access relief funds should they become available to municipalities, Council member Laura Curliss noted.

“It can’t hurt,” when applying for such funds, she said. Curliss added that declaring an emergency shows that the government is “taking away public access from the public” for a good reason, citing the closure of local parking lots.

Council Vice President Marianne MacQueen said that before moving forward she would like to have more clarity on how declaring a local state of emergency would help the community.

“My inclination would not be to declare a state of emergency unless there was clarity that it serves a purpose,” she said. “I don’t want to exacerbate people’s sense of things.”

Council will talk more about the issue at its April 20 meeting, where a sample emergency declaration resolution will be considered, Housh said.

Housh ended the Council meeting with some advice for villagers.

In other Council business —

• Council unanimously passed a resolution to give $35,000 to the Yellow Springs Development Corporation, or YSDC, a collaborative local economic development agency. The money came from the Village’s economic revolving loan fund, but has not been used for more than a decade. Kreeger said the funds originally came from a grant. She added that the YSDC, which the Village has designated as its economic agent, conforms with Sunshine Laws. In response to a question from the News about guidelines previously developed for the funds, Kreeger said that the YSDC is creating its own values statements to guide loan decisions.

• Council approved the purchase of a new $50,000 pump for the lift station that is part of the Village’s wastewater treatment process. The pump is aging, and has leaked sewage due to a nonrepairable seal, according to Village Public Works Director Johnnie Burns. The expense was previously slated as part of the 2020 capital budget, Village Manager Josué Salmerón said. In response to a question from the News, Burns said the new pump would not decrease the occasional odor from the lift station, which is located along U.S. 68 across from the Bryan Center. That lift station handles about 70% of local sanitary sewer flow, Burns added.

• Council unanimously passed the second and final reading of an ordinance making changes to Village water connection fees. Council Clerk Judy Kintner said the minor changes were a matter of “housekeeping” and included “no rate changes at all.” Curliss raised the issue that residential and commercial connection fees are the same. Burns said the size of the line is often different and added that rates for both users are also the same.

Council’s next virtual meeting is Monday, April 20, at 7 p.m.