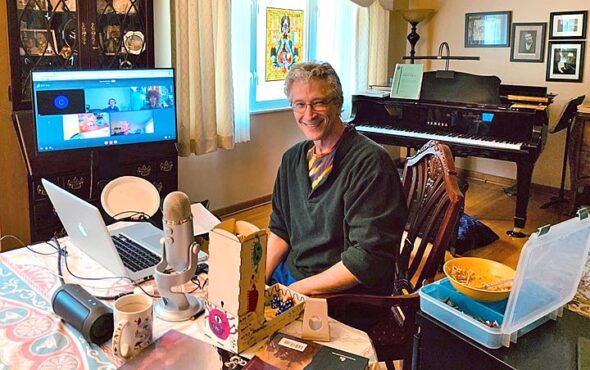 Skip Leeds at home, surrounded by the array of equipment he uses as dungeon master for a group of local 10-year-olds, who are pictured on Leeds’ computer screen, in the midst of an online game of Dungeons and Dragons. (Submitted photo)

A band of adventurers named Hallux, Kerabor and Bardox trudged through the foggy autumnal hills, strangers in the strange land of Borovia. A conspiracy of ravens circled overhead, and as they traveled deep into a forest, Bardox and Hallux discussed how best to help Kerabor, who had been transformed into a boar by a powerful spell.

“Could we maybe kill him?” wondered Bardox.

“And then bring him back?” pondered Hallux.

Their traveling companion, a native Borovian, spoke up.

“This land is cursed — no one dies in Borovia without consequence,” he said. “If you do this, your friend may never be the same.”

There was a pause.

Then, Kerabor the Boar snuffed and bent down. He used his snout to write a simple message on the forest floor: “N. O.”

Here in Yellow Springs, 10-year-olds Oskar, Jaden and Wills huddled together around a large table scattered with maps, dice and notes — and copious snacks. They were playing Dungeons and Dragons, acting out the thoughts and choices of their characters — Bardox, Hallux and Kerabor, respectively — in real time.

The game took place earlier this year, when the kids would meet in person every weekend to play the role-playing game, which was conceived in the 1970s and has since attained legendary pop culture status.

But the coronavirus pandemic has, for the time being, put a moratorium on in-person games. Not to be discouraged, Oskar, Jaden and Wills — and many others, both locally and worldwide — have moved their games online, adapting to the virtual environment and using the internet’s tools to their -advantage.

At its core, Dungeons and Dragons, or D&D, relies mainly on two things: a set of dice and a good imagination. Simply, it works like this: a dungeon master, or DM, leads a group of players through a fantasy world that the DM populates with invented people, places and adventures. Each player creates a unique character with their own history, abilities and desires. Characters interact with each other and the fantasy world based on these characteristics, and when a character wants to do something challenging, the player must roll dice — and follow attendant rules spelled out in the game’s “Player’s Handbook” — to determine whether that action succeeds or fails.

D&D was created in 1974 by Gary Gygax and Dave Arneson, gaining a certain amount of mainstream popularity by the late 1970s. The game became notorious in the 1980s when it was blamed for a whole host of things, from promoting “devil worship” to negatively affecting the mental health of its players. Despite the moral panic of the time and the press the game received, D&D has endured, and has experienced a surge in mainstream interest over the last decade, due in part to the preponderance of ’80s nostalgia that has popped up in mainstream media.

“The truth is that D&D has had sustained popularity that few tabletop games have,” said Jared Whittaker, manager at Super-Fly Comics and Games in Yellow Springs, via email in early March. “That said, its inclusion in the plot of [’80s-set TV show] ‘Stranger Things’ really got more eyes on D&D.”

Also adding to the game’s rise in public attention was the release of D&D’s fifth edition in 2014. Though earlier versions of the game had alienated some potential players with more abstruse rule sets, the fifth edition allows for dungeon masters and players to focus on building worlds within a set of streamlined rules that are more accessible and flexible.

“There are a ton of new players … and we’ve seen a lot of interest in-store over the last few years,” Whittaker said. “Really being able to make the game experience truly yours makes the best role-playing games.”

Villager Skip Leeds has been a fan of D&D nearly since its inception in the mid-’70s.

“I was into D&D before it was even nerdy yet — it was too obscure,” he said, referencing the game’s long association with “nerd culture.” 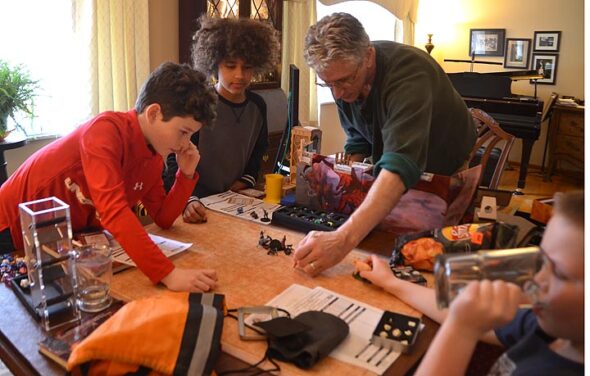 Leeds has been playing with a local group of seven other players for the past several years, led by DM Ian McDonald — they still play using the game’s first edition rules, on which many of the players cut their teeth. A few months ago, Leeds and fellow player Chris Wyatt sat down together at Leeds’ home to talk about the characters they play.

Leeds’ character, a gnome illusionist named Skeuo, is on the run from his hometown after having offended the local leadership.

“He’s basically in fantasy witness protection — nobody even knows his surname,” Leeds said.

Wyatt, who started playing D&D in the early ’80s, plays a halfling thief named Tubby Bolger. Describing Tubby, he said: “He has an ego — let’s just leave it there.”

Both Leeds and Wyatt had been dormant in their D&D playing for years before their local group formed, and they both said that bringing the game back into their lives has enriched them tangibly.

“It’s so much fun,” Wyatt said. “You’re interacting with friends and creating a story together — it’s wonderful.”

D&D is something of a family affair for both villagers: Leeds is DM for the aforementioned group of kids — Oskar (Bardox) is his grandson — and Wyatt has played with his sons, Bob and Morris. Wyatt’s wife, textile artist Karen Russell, crafted cloth dice bags for all the players in Wyatt’s and Leeds’ group.

Wyatt said he first introduced the game to his kids as a way to engage their imaginations.

“And now Bob is a DM — he plays in about three campaigns,” he said. “It was a way to get them off the screens, and it worked really well — for a couple of years.”

Despite Wyatt’s efforts, the coronavirus pandemic has meant that connecting with folks outside the home now often requires the use of screens. So how do you play a game like D&D, which relies on close, collaborative group effort, when groups must stay physically separate?

It helps that some groundwork has already been laid — platforms enabling players to take their D&D games online have been available for more than a decade, allowing people to play together from all over the world. One such website, Roll20, replaces paper, pencils and dice with mouse clicks and allows users to talk via text, audio and video chat. In late March, SYFY Wire reported that Roll20 had experienced significant upticks in traffic as groups move online en masse, to the extent that the site has suffered some outages and technical glitches.

Wyatt and Leeds, speaking via video chat last week, said their group has some prior experience with online play, as two of their players were already remoting in from Portland, Ore., and Windhoek, Namibia. Now, with all players connected via video chat, Leeds said the adjustment period is mostly over and it’s starting to feel like “the new normal.”

“It doesn’t feel so distant and disconnected — it feels real,” he said.

But internet connectivity issues and the challenges inherent in having the whole family at home all the time have meant that Wyatt has had to drop out of the game — for now.

“I can’t participate because I often can’t see or hear people, so that’s frustrating, and I’ve been putting out a lot of home fires,” he said. “I do still occasionally listen in, though, and I’m designing dungeons during lockdown.”

“It’s been hard not having Chris there, because his character is pretty pivotal,” Leeds added.

Leeds said that running the game for the kids’ group — which has expanded and now includes Oskar, Jaden, Wills, Gavin and Donovan — has helped him embrace what online play has to offer.

“I often use the expression, ‘Don’t pave the cow path,’” he said. “So instead of trying to replicate what we do physically, we try to play into what the tools can do for us.”

To that end, Leeds is using a lot of sound effects, a voice modulator and mood music to spice up the online games and ground the players in the fantasy world. He likens his new storytelling avenue to audio drama, something which has long held his interest.

“It’s like an old-time radio program — I feel like I’m doing a Bob and Ray thing here,” he said.

Still, there are challenges. The crosstalk and noise that a group of young folks can produce in person are magnified in a video chat. The group has had to learn together how to navigate the ins and outs of when to talk, when to roll dice on-camera — and when to use the mute button.

Despite the minor problems in this new way of play, Leeds said it’s been a joy to stay connected to friends and family by continuing to engage in one of his favorite activities. D&D accounts for a large chunk of his weekend, playing with the adult group on Saturdays and leading the kids’ group on Sundays. All told, it’s about 10 hours of his life that he looks forward to every week.

“The parents of the kids in my group are just gushing with gratitude, too,” he added.

Leeds does miss playing in person — there’s nothing like the click of the dice on the table and the feeling of camaraderie that any gathering elicits — but for now, connecting with friends online is filling a hole in his life that would otherwise be left empty.