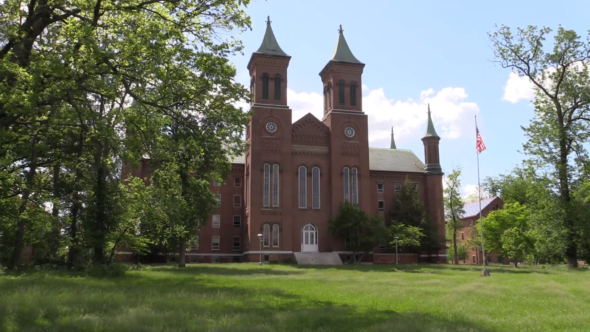 Antioch Hall on the campus of Antioch College, a video still from 2020 commencement

Antioch College is cutting spending by $2.5 million in the coming fiscal year, which begins July 1. Eight staff employees, currently furloughed, are being laid off. In addition, the college is reducing its faculty by six, through voluntary and negotiated departures and one retirement.

In a Wednesday interview with the News, Antioch President Tom Manley described the staff and faculty cuts as painful but necessary in order to balance the next fiscal year’s budget. The workforce reduction accounts for about three-quarters of the overall spending cuts.

“These are big, tough decisions,” he said. “The numbers are what they are, and each year we try to line up revenues with expenses.”

Antioch is cutting spending due to “acute” financial pressures at the college intensified this spring by the effects of COVID-19, Manley said. He noted Antioch is far from alone in making cuts in response to COVID-19 and the ongoing enrollment and budgetary challenges many colleges face.

“I haven’t heard of a single college that isn’t affected,” he said. “They are all taking serious budget action to try to survive.”

According to Manley, Antioch’s board of trustees believed decisive action was needed to put the college on a sustainable path for the coming year. A trustee task force of three worked on the new budget, with input from across the college.

“Rather than go at it incrementally, the board felt it had to be decisive,” he said.

The new expense budget for fiscal year 2021 is $8.5 million, down about 20% from the current fiscal year’s budget of $10.9 million. This budget is the college’s cash budget, which pertains only to its core academic operations and doesn’t include items like asset depreciation, Manley clarified.

The college anticipates being able to raise $8.5 million in revenue in the coming year, an amount Board of Trustees Chair Maureen Lynch said she felt comfortable the college could achieve. The expense budget was created to align with that revenue projection.

“The board is confident that it’s a sensible, achievable budget,” Lynch said.

Regarding the staff and faculty reductions, Manley declined to identify specific individuals or functions that had been cut, citing privacy considerations. The effects of the spending cuts and layoffs touch all departments of the college, he said.

In early April, Antioch furloughed about 27 staff employees in response to the COVID-19 crisis. Faculty members took pay cuts at that time, but were not furloughed. The current faculty reduction is the first time the relaunched college has let go of faculty members by a method other than attrition, Manley said in response to a News question. He acknowledged the gravity of the move.

“When you have to make these changes, it’s truly, truly difficult,” he said.

Most of the remaining furloughed staff remain on furlough, with no decision yet on their eventual return or separation from the college. A few furloughed staff employees have been restored as the college works toward reopening the campus this fall, according to Manley.

According to college officials earlier this spring, Antioch had 115 staff and 22 faculty members at that time.

Antioch’s campus has been closed since mid-March as a result of COVID-19. The college recently announced plans to reopen its campus this fall, a move Manley said a majority of returning and prospective students favor. Enrollment for the fall term is not yet known, but Manley said the college has seen a significant rise in the numbers of new students committing to Antioch.

A more in-depth report will appear in the July 2 issue of the News.