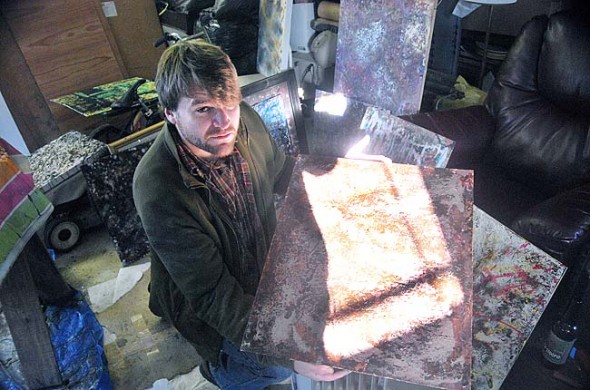 Martin Borchers, who died in a car accident last week, was photographed in 2016 before an exhibition at the Winds of some of his abstract paintings. (News archive photo by Aaron Zaremsky)

By all accounts, Martin Harold Benedict Borchers was in a pretty good place in his life Wednesday morning, May 27, before the car he was driving went off the right side of a narrow country road and hit a utility pole head on. The 34-year-old longtime Yellow Springs resident was pronounced dead at the scene, amidst rolling farmland north of the village.

According to the Springfield post of the Ohio State Highway Patrol, the single-car accident occurred on West Jackson Road, by the Fowler Road intersection and near the Clark and Greene county line. A neighbor, a nurse who heard the crash and ran to the car, reported that death was instantaneous.

The accident took place about two miles from the Borchers family home on Yellow Springs-Fairfield Road. The family, which includes Martin’s parents, Theresa and Jerome; brothers, Dylan and Sam; and sister, Eileen, moved to Yellow Springs from Shelby County about 20 years ago, when Martin, the second oldest sibling, was in his teens.

He graduated from Yellow Springs High School in 2004, and despite spending some time traveling and taking jobs out of state, including working last year on a film about the Lakota Nation, Martin Borchers called Yellow Springs home.

Friends remember a big-hearted, kind person who thought deeply about life and his place in it and gave generously of his time and talents, of which he had many.

“He was a beautiful soul who marched to his own beat and left his mark on all who knew him,” elder brother Dylan said in his eulogy Tuesday morning following a Mass of Christian Burial at St. Paul Catholic Church, where the Borchers are members.

“He was sweet and thoughtful,” Dylan Borchers said. He especially had a tender heart for “people who were different or struggling.”

Those who loved him knew Martin had struggled as a young man to find his way as well. But he invariably made an impact on those around him wherever he went. Holding a variety of jobs in town — Little Art Theatre projectionist, Sunrise Cafe server, among them — became the vehicle to widen and deepen a circle of friends who are devastated by his loss.

Villager Katie Rose Wright met and befriended Martin when both were students at the high school, even though she was several years older.

The arts in particular proved an outlet for his introspective and creative nature. He was a poet, writer, filmmaker, musician and visual artist. As a high school senior, he received a gold medal in the Scholastic Arts national competition; and more recently his paintings were displayed in a 2016 exhibition at the Winds. His work also hangs on the walls of many of his family and friends, to whom he gave freely.

“He truly fought for the underdog,” Wright said. “He always championed somebody who was having an issue, whenever he saw some injustice happening.”

Borchers was “also very witty and hilarious,” Wright added. Other friends found him so much fun to be around, they had a Facebook page for a while titled “I partied with Martin.”

Wright, a former drug and alcohol counselor, said Martin was proud to have marked a year of sobriety before his death. “He was very vocal about it,” she said.

Her memories hold images of Martin grabbing every moment of living that he could. She said one of her favorites is seeing him reading a book while simultaneously walking to his job at the Little Art. Wright noted that the nurse who was the first to reach his wrecked car told her that the music he’d been listening to was still playing, and she believed he must have been happy as he drove the back country roads on a beautiful May morning.

According to reports, Borchers was cresting a hill when he swerved to avoid a car coming out of a driveway, then lost control of his vehicle. The accident report said speed may have been involved, but did not give an estimate. He apparently wasn’t wearing a seatbelt.

His brother Dylan wrote in a Facebook post that going for a drive in the countryside was something Martin enjoyed amidst the COVID-19 shutdown.

He had come back to town from his filmmaking work in the West just as the pandemic was beginning. According to Dylan, Martin returned “with a new sense of peace and steadiness and vision for his future.” During his time with the Lakota people, he was adopted by a Lakota family and invited to attend a sacred Sun Dance, a testament to the personal relationships he formed wherever he went.

Martin’s sense of social justice can be traced back to his youth. As a junior in high school, he won the annual Martin Luther King Day essay contest. His words seem still relevant today.

If King were alive, Borchers wrote in 2003, “he would find an audience still in desperate need of his leadership, an audience yet to create the world that he dreamed of.” King would know “that it is not his words we need but his faith, the faith that we can in fact make changes ourselves. … Love each other and treat each other right. Embrace each other, hold on to each other. In the end all we have is each other.”

A GoFundMe page has been started in Borchers’ memory, with all donations to go to the Lakota People’s Law Project. The link to contribute is https://bit.ly/3eKR64d

One Response to “Crash victim known for kindness, heart”