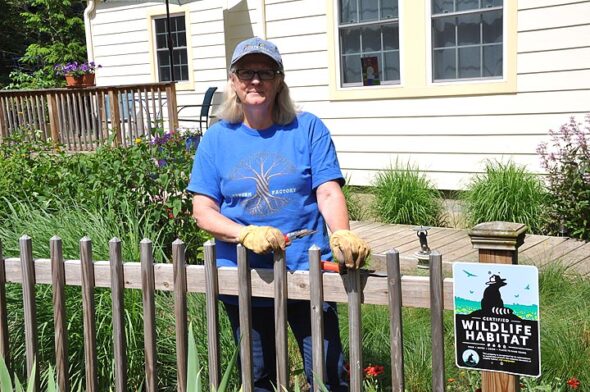 Environmentalist and filmmaker Catherine Zimmerman is leading a local effort to certify Yellow Springs as a Community Wildlife Habitat, under a National Wildlife Federation program designed for municipalities. Here she’s pictured in her North Walnut Street garden, one of about 40 local properties certified for providing wildlife habitat and incorporating sustainable gardening practices. (Photo by Audrey Hackett)

In late summer, native sunflowers in Ellen Hoover’s garden draw goldfinches. The bright yellow birds feast on seeds, then burst out like sunflower petals flung to the sky. Down the street, monarch butterflies browse Catherine Zimmerman’s coneflowers, goldenrod and asters. Butterflies, wasps and other insects pause and sip from a “butterfly bath,” a variant of a birdbath that’s shallower and filled with places to safely perch in the water. And hummingbirds zip in for quick meals of nectar at a feeder or guzzle at clusters of penstemon, a native wildflower.

Both gardens are certified wildlife habitats, which means they provide food sources, water sources, places for shelter and cover and places for animals to raise young, as well as incorporating sustainable gardening practices. There are now over 40 such gardens in Yellow Springs, certified as wildlife habitats through the National Wildlife Federation, or NWF.

The earliest local wildlife habitats to be certified through the national program date back to 2004. But just this spring, about 20 new yards in the village achieved certification, as part of a new effort to certify not just yards here and there, but Yellow Springs as a whole.

Led by Zimmerman, an environmentalist and filmmaker who moved to the village in 2017, the new initiative seeks to certify Yellow Springs through the NWF Wildlife Habitat Community Program, which supports “municipalities and community leaders who want to create and improve habitats for wildlife throughout their entire community,” according to an online Q&A.

“Our hope is to educate and inspire people to pay attention to our little piece of earth,” Zimmerman said of the impetus for implementing the program here.

The Village of Yellow Springs is formally on board, with the aim of achieving community certification this year included as one of the Village’s 2020 goals.

“The goal fits into our broader environmental goals,” which include supporting environmental efforts locally and regionally in collaboration with other organizations, Village Council Vice President Marianne MacQueen explained.

“I just love the concept of it. So many of us can do it in our yards,” TLT Executive Director Krista Magaw said.

Bethany Gray, a local naturalist, NWF “ambassador” and board member of TLT and the Glen Helen Association, said the effort is crucial to countering widespread declines in pollinator and bird species due to human-related environmental threats.

“We have to take steps to support these species,” she said.

Bird and pollinator declines are dramatic and well documented. A large-scale study published in the journal “Science” last fall found a loss of nearly 3 billion birds in North America since 1970, a population decline of about 30%. The study describes a “pervasive and ongoing crisis” among bird species on the continent. Another recent study based on butterfly monitoring in Ohio over 20 years showed a one-third decline in butterfly populations during that time. Habitat destruction, herbicide and pesticide use and climate change are three factors identified in these and other studies as contributing to species declines. 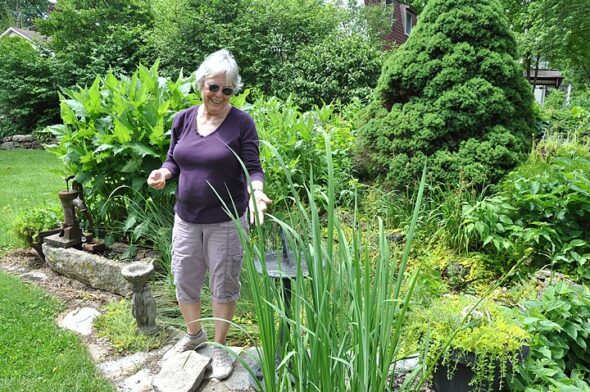 Plant lover Ellen Hoover has been gardening at the corner of North Walnut and Dayton streets for a dozen years. Her lush yard includes two water features and incorporates a mix of native and nonnative plants. She recently got wildlife habitat certification from the National Wildlife Federation. (Photo by Audrey Hackett)

Certifying Yellow Springs as a wildlife habitat under the NWF program aims to create a local landscape that draws and supports birds, bees, butterflies, amphibians and small mammals, according to Zimmerman.

That support starts with planting native plants and eliminating the use of herbicides and pesticides, she said.

“The number one reason to plant something is ecological,” she said.

Zimmerman, previously a self-described “queen of the lawn” who saw a better way 20 years ago, does garden consultation, as well as working on her own garden at her North Walnut Street home. When she consults with clients, one of the first things she does is listen — to the sound, or the silence, of birds.

“I just stand there and listen. If it’s very quiet, that’s usually because there’s nothing in the yard that produces insects for birds to eat,” she said. That’s true of many yards, including quite a few in Yellow Springs, she added.

A chickadee requires 6,000 to 9,000 caterpillars to fledge a nest of young, according to Zimmerman. Insects tend to be choosy about their host plants, with about 90% of insects relying on a single plant species or family of plants. If those plants aren’t available — as is the case in yards dominated by invasive species or horticultural ornamentals — there will be few insects and few birds.

“The whole web breaks down,” she said.

Zimmerman also made the distinction between more and less “productive” plants. Plants that support many different species are considered more productive, while those that host few are described as less productive. Native oak trees are perhaps the most productive plant, supporting over 500 caterpillar species, according to Zimmerman. Native goldenrod hosts over 120 species, while redbud, an attractive flowering tree pervasive across Yellow Springs, supports about five. Redbud is a native tree, but less productive.

The NWF criteria for wildlife habitat certification are straightforward and easy to achieve. For example, a water source can be a birdbath, and cover for wildlife can be a brush pile.

“I like to say that you can keep your yard a little messy,” Gray said.

Zimmerman said the criteria are a place to start from, a helpful minimum she hopes Yellow Springs will meet and exceed.

The village was registered as a NWF community wildlife habitat earlier in June, with Zimmerman donating the $99 registration fee, the first formal step toward becoming certified. Because the village currently has around 40 certified properties, including Antioch College and the Yellow Springs Community Library, the community already is about halfway toward that part of the certification. Other certification areas are focused on outreach and education, as well as administration of the effort.

There are currently only two certified wildlife habitat communities in Ohio, Dublin and Medina County, with a handful of others seeking certification, according to the NWF database.

MacQueen affirmed that all kinds of local properties could be included in the certification, including Village-owned property such as the John Bryan Center and the Village food forest. In a related effort, Village staff are working with local gardener Malarkey to craft and implement a sustainable landscape maintenance approach that is pesticide free, or nearly so.

Mills Lawn School will likely be involved in the community wildlife habitat project next year. A planned collaboration with Heidi Hoover’s second-grade class was put on hold because of the COVID-19 pandemic this spring.

Regarding other education and outreach, Zimmerman said she plans to get educational posters about the effort up soon at YS Hardware and Stoney Creek Garden Center. And the local wildlife habitat team also hopes to record and disseminate educational videos about sustainable gardening practices through the Village’s public access channel.

“We can do it. It’s not hard, it just takes a little understanding,” she said of the effort.

Ellen Hoover, whose abundant gardens at the corner of North Walnut and Dayton streets draw notice from villagers and visitors alike, can attest to that. Hoover got certified in May — the application process and fee were a gift from her daughters for her birthday and Mother’s Day. A small certification sign now graces the side of her yard.

Walking the NWF checklist around the yard she’s gardened for a dozen years, she met all the criteria, which she described as straightforward, but thoughtful.

“I was delighted,” she said.

She and her husband, Rod Hoover, are owners of the 1842 house known as the Birch House, where Hugh Taylor Birch grew up, and their garden includes native specimens such as buckeye bush and comfrey that derive from the Glen prior to that land becoming a private preserve.

Hoover said she’s long loved gardening, and the NWF certification already has made her more aware of how her gardening choices affect the health of the earth.

“It makes me much more aware of what I’m doing in the garden. I make sure I’m doing it according to the goals of the certification,” Hoover said.

To learn more about the effort and access gardening resources, visit the YS Wildlife Habitat Community Facebook page, or Zimmerman’s own page at The Meadow Project, http://www.themeadowproject.com.