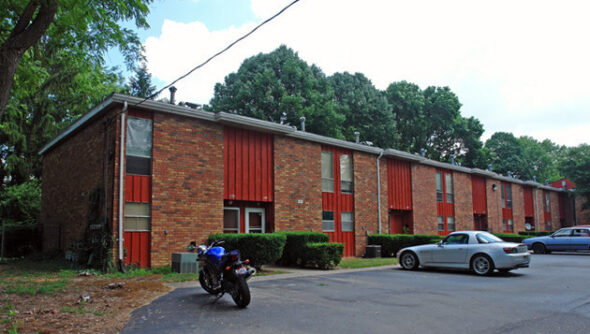 In mid-April, Windy Gail’s landlord handed her a “Notice to Leave the Premises” at her local apartment complex, giving her three days to leave her residence.

“You are being asked to leave the premises,” the note read. “If you do not leave, an eviction action may be initiated against you.”

Gail had missed April’s rent while waiting on her unemployment benefits and federal stimulus check. At home caring for two children, Gail was recently unemployed and job hunting when the pandemic hit and dried up any work prospects.

Soon after, when her federal stimulus came through, Gail immediately paid her rent, along with a late fee.

“They make it seem like a legal document so it makes you feel like you have to leave,” Gail said of the note. However, she knew her rights. “It’s more of a threat. If you leave voluntarily, they don’t have to evict. You also don’t get your deposit back.”

Gail was fortunate that Xenia Municipal Court had temporarily halted eviction proceedings during the early days of the pandemic. Otherwise, Gail could have been evicted three days after receiving the notice, even if she offered to pay her rent in full, late fees and all. And once that eviction was filed, no matter the outcome of the case, it would have been a permanent stain on her credit report.

“There’s been a general concern that maybe all landlords aren’t all on board with how important it is to give people a break right now,” Council President Brian Housh said in an interview this week.

Also, at its June 1 regular meeting, to be held virtually, Council is considering a temporary  “pay to stay” ordinance that would compel local landlords to accept late payments so that a tenant can stay, rather than be evicted.

At the same time, the Housing Stability Task Force of the Yellow Springs Community Foundation is gathering information on local needs and connecting renters with resources to help them stay in their residences. And some village residents are exploring a tenant’s union to organize local renters.

The first and loudest message to local renters is this: The only way a tenant can be evicted is through the courts. Landlords can’t physically force a tenant off of the property, remove a tenant’s possessions, turn off utilities, change the locks or make the property unlivable to kick them out. Renters are also advised to contact their landlords immediately to tell them about their financial situation and come up with a plan to pay.

If Council passes emergency “pay to stay” legislation on June 1, Yellow Springs would be the first municipality in Ohio with the law on the books. The measure would require local landlords to accept late payments so that a tenant can stay in their residence. They would also be required to pay reasonable late fees and any court costs. The measure would be in effect for one year, according to draft legislation.

“Why wouldn’t we use this as a tool in the toolbox?” Housh said of the proposed measure. “If it can help somebody, then it makes a lot of sense to me.”

Housh added that he also looked at passing a moratorium on local evictions, but was not clear if it would be enforced by the Xenia court.

Unlike about half of the states, Ohio did not issue a moratorium on evictions during the coronavirus pandemic, although the governor asked the 164 local courts who oversee evictions to suspend them temporarily. Also unlike some states, Ohio does not have a “pay to stay” law.

For Debra Lavey, an attorney with Advocates for Basic Legal Equality in Dayton, or ABLE, that is concerning, as Ohio was already seeing “an evictions crisis” prior to the pandemic and the associated job losses. And while millions of dollars in financial assistance to renters may soon be available to Miami Valley tenants through the federal CARES Act, rental assistance won’t matter much if landlords don’t have to accept the payment, Lavey explained.

“We see ‘pay to stay’ and rental assistance as twins to help fill the gap and keep people where they’re at during this public health crisis,” Lavey told Council members, appearing by videoconference. Even with rental aid coming, without a “pay to stay” measure, Lavey added, “many tenants will still end up homeless.”

In response to a question, Lavey clarified that the measure only applies to residential evictions and evictions related to nonpayment of rent. Tenants could still be evicted for other reasons, such as health and safety, criminal activity or another “breach of lease.”

“The idea is that neither party is out anything,” she said of “pay to stay” legislation. “The landlord is made whole, and the tenant is paying what needs to be paid.”

Council members were largely supportive. Council member Lisa Kreeger suggested that commercial properties be added to the legislation. And Kevin Stokes urged Council to pass the measure as a permanent, rather than temporary, ordinance.

Asked how the law would be applied at the Xenia Municipal Court, which hears Yellow Springs eviction cases, Lavey said it has not been tested, but she believes the court would have to apply the local ordinance.

“The law of Yellow Springs would apply and the court would be obliged to follow that law,” she said.

The Housing Stability Task Force of the Yellow Springs Community Foundation, meanwhile, is moving forward with their own effort to support local renters, as well as landlords.

On March 13, when the YS Community Foundation convened a group of community leaders at the start of the pandemic, housing and food security emerged as two critical areas, according to Housh. Len Kramer volunteered to convene the Housing Stability Task Force, which also includes Emily Seibel of Home, Inc. and Ellis Jacobs, an attorney with Dayton ABLE.

Last month, the task force surveyed local tenants and found that renters are “really concerned,” according to Kramer.

Of the 21 tenants who responded to the survey, 13 wrote that they didn’t feel stable in their current rental situation. More than half lost their income due to COVID-19. And while only three reported they had difficulty paying April’s rent, seven said they would have trouble come May 1.

Looking ahead, renters have additional  concerns, the survey revealed. In the short term, renters worry about repairs not being made, while in the next three to six months, they worry how they will pay their rent, according to Kramer.

Moreover, Kramer found that local landlords are approaching the issue in various ways.

“They had mixed responses from their landlords,” Kramer said of the response from renters. “Some got offers of extensions and rent forbearance and some didn’t. Some were charged late fees, and some were not.”

In a related effort, the task force is reaching out to about 20 local landlords to hear their concerns. So far, Kramer said he has heard that landlords worry “how they can afford to keep pushing rent out,” as well as whether their tenants will ever be able to repay deferred rent.

“There aren’t a lot of resources for landlords available in the CARES Act, so it’s a little sticky right now,” Kramer said. “It’s kind of a difficult situation. But everyone seems to be dedicated to working it out.”

In a separate community foundation survey of 700 local households recently, about 40 wrote they worried about their housing stability, Kramer added. The problem could be more widespread than the survey revealed. About one-third of all occupied housing units in the village are rentals, 601 units, according to the 2018 American Community Survey. Meanwhile, prior to the pandemic, 43% of local renters were housing-cost burdened, according to figures provided by local affordable housing nonprofit Home, Inc.

As they continue to learn more about local needs, the Housing Stability Task Force is taking steps to support renters by making sure they know their rights, according to Kramer. They’re also connecting them with legal resources such as Legal Aid and free financial counseling services now being offered by Home, Inc.

The group’s work, however, is just beginning, as the renters’ crisis appears to be in its early stages.

“I think that people are getting by for now, but as relief dries up, I don’t know,” Kramer said. “I alternate between being optimistic and being pessimistic.”

Spencer Wells, of the Cleveland-based Rental Housing Information Network in Ohio, or RHINO, sees a “trainwreck” coming for renters in the state. Statewide efforts to halt evictions have not been enough, he said, which is why municipalities and courts need to step up.

“Local courts can encourage mediated settlements rather than filing in courts,” he said by phone last month. “They need to cue to the landlords and tenants what to expect when the moratorium is lifted.”

Another option for local tenants, especially those who live in multi-family units, is to organize into a tenants’ union, Wells said.

Local resident Matt Raska posted fliers at one local apartment complex last month to see if there was interest in starting a tenants’ union there. Although Raska doesn’t currently rent, he has been a tenant in town and knows renters’ concerns.

“I’ve been locked out of my apartment, I’ve had repairs neglected. So I empathize with tenants,” Raska said. He added that while landlords have options, such as mortgage forbearance from creditors or tapping into their equity, renters “have no equity.”

A tenants’ union would help educate renters about their rights, and be a way for renters to engage in collective action, Raska added. Many renters may not know, for instance, that they can put their rent money in escrow until a landlord performs necessary repairs, without the threat of eviction. But certain legal steps, such as using certified mail to communicate with a landlord, can be tricky.

“The rigamarole you have to go through is onerous and inconvenient,” he said of such actions. “This tenants’ union would be able to help tenants figure out their options a lot more quickly.”

Fellow organizer and local business owner Lindsay Burke described a tenants’ union as a “collective bargaining tool” to encourage landlords to act fairly and humanely during the crisis.

“The idea is either the landlord would be compassionate, or there would be collective action to say, ‘No, you can’t turn people out on the street in the middle of this,’” she said.

Burke, who runs the Facebook page Dayton Rent Strike and last month organized area events as part of a national caravan to cancel rent during the pandemic, worries about a “massive wave of evictions and homelessness” once the courts are reopened.

Burke said she understands that landlords are worried about their property investments, but renters are uniquely insecure right now.

“It’s just not practical or humane to pass that burden on to the most vulnerable,” she said. “For the vast majority of working class people, they are in an unprecedented insecure position.”

One Response to “New efforts to avoid evictions”